Phencyclidine (a complex clip of the chemical name 1-(1-phenylcyclohexyl)piperidine), commonly initialized as PCP and known colloquially as angel dust, is a recreational dissociative drug. Formerly used as an anesthetic agent, PCP exhibits both hallucinogenic and neurotoxic effects.[1]

First synthesized in 1926,[2] it was eventually patented in 1952 by the Parke-Davis pharmaceutical company and marketed under the brand name Sernyl. In chemical structure, PCP is an arylcyclohexylamine derivative, and, in pharmacology, it is a member of the family of dissociative anesthetics. PCP works primarily as an NMDA receptor antagonist, which blocks the activity of the NMDA receptor and, like most antiglutamatergic hallucinogens, is significantly more dangerous than other categories of hallucinogens.[3][4] Other NMDA receptor antagonists include ketamine, tiletamine, dextromethorphan and nitrous oxide. Although the primary psychoactive effects of PCP last for a few hours, its total elimination rate from the body typically extends eight days or longer.

As a recreational drug, PCP may be ingested, smoked, or snorted.[5]

PCP is well known for its primary action on ionotropic glutamate receptors, such as the NMDA receptor in rats and in rat brain homogenate.[6][7] As such, PCP is an NMDA receptor antagonist. NMDA receptors mediate excitation,[8] however, studies have shown that PCP unexpectedly produces substantial cortical activation in humans[9] and rodents.[10]

PCP, like ketamine, also acts as a D2 receptor partial agonist in rat brain homogenate.[7] This activity may be associated with some of the more psychotic features of PCP intoxication, which is evidenced by the successful use of D2 receptor antagonists (such as haloperidol) in the treatment of PCP psychosis.[12]

The relative immunity to pain is likely produced by indirect interaction with the endogenous endorphin and enkephalin system, as has been suggested by studies involving rats.[13][clarification needed]

PCP may also work as a dopamine reuptake inhibitor.[14]

PCP is metabolized into PCHP, PPC and PCAA.

When smoked, some of it is broken down by heat into 1-phenyl-1-cyclohexene (PC) and piperidine.

Conversion of PCP into PC and piperidine by heat. (Image in the PD) 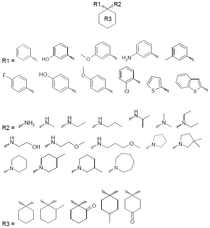 More than 30 different analogues of PCP were reported as being used on the street during the 1970s and 1980s, mainly in the USA. The best known of these are PCPy (rolicyclidine, 1-(1-phenylcyclohexyl)pyrrolidine); PCE (eticyclidine, N-ethyl-1-phenylcyclohexylamine); and TCP (tenocyclidine, 1-(1-(2-Thienyl)cyclohexyl)piperidine). These compounds were never widely-used and did not seem to be as well-accepted by users as PCP itself, however they were all added onto Schedule I of the Controlled Substance Act because of their putative similar effects.[15][citation needed]

The generalized structural motif required for PCP-like activity is derived from structure-activity relationship studies of PCP analogues, and summarized below. All of these analogues would have somewhat similar effects to PCP itself, although, with a range of potencies and varying mixtures of anesthetic, dissociative and stimulant effects depending on the particular substituents used. In some countries such as the USA, Australia, and New Zealand, all of these compounds would be considered controlled substance analogues of PCP, and are hence illegal drugs, even though many of them have never been made or tested.[16][17][clarification needed]

Some studies found that, like other NMDA receptor antagonists, phencyclidine can cause a certain kind of brain damage called Olney's lesions in rats.[18][19] Studies conducted on rats showed that high doses of the NMDA receptor antagonist MK-801 caused reversible vacuoles to form in certain regions of the rats' brains. All studies of Olney's lesions have only been performed on animals and may not apply to humans. The research into the relationship between rat brain metabolism and the creation of Olney's Lesions has been discredited and may[weasel words] not apply to humans, as has been shown with ketamine.[20][21]

Phencyclidine has also been shown to cause schizophrenia-like changes in N-acetylaspartate and N-acetylaspartylglutamate in the rat brain, which are detectable both in living rats and upon necropsy examination of brain tissue.[22] It also induces symptoms in humans that mimic schizophrenia.[23]

History and medicinal use

PCP was first synthesized in 1926 and later tested after World War II as a surgical anesthetic. Because of its adverse side effects, such as hallucinations, mania, delirium, and disorientation, it was shelved until the 1950s. In 1953, it was patented by Parke-Davis and named Sernyl (referring to serenity),[24] but was only used in humans for a few years because of side-effects. In 1967, it was given the trade name Sernylan and marketed as a veterinary anesthetic, but was again discontinued. Its side effects and long half-life in the human body made it unsuitable for medical applications.

Illicit PCP seized by the DEA in several forms.

PCP began to emerge as a recreational drug in major cities in the United States in 1967.[25] In 1978, People magazine and Mike Wallace of 60 Minutes called PCP the country's "number one" drug problem. Although recreational use of the drug had always been relatively low, it began declining significantly in the 1980s. In surveys, the number of high school students admitting to trying PCP at least once fell from 13% in 1979 to less than 3% in 1990.[26]

PCP comes in both powder and liquid forms (PCP base is dissolved most often in ether), but typically it is sprayed onto leafy material such as cannabis, mint, oregano, parsley, or ginger leaves, then smoked.

In its pure (free base) form, PCP is a yellow oil (usually dissolved in petroleum, diethyl ether, or tetrahydrofuran). Upon treatment with hydrogen chloride gas, or isopropyl alcohol saturated with hydrochloric acid, this oil precipitates into white-tan crystals or powder (PCP hydrochloride). In this, the salt form, PCP can be insufflated, depending upon the purity. However, most PCP on the illicit market often contains a number of contaminants as a result of makeshift manufacturing, causing the color to range from tan to brown, and the consistency to range from powder to a gummy mass.[citation needed] These contaminants can range from unreacted piperidine and other precursors, to carcinogens like benzene and cyanide-like compounds such as PCC (piperidinocyclohexyl carbonitrile).[citation needed]

The term "embalming fluid" is often used to refer to the liquid PCP in which a cigarette is dipped, to be ingested through smoking, commonly known as "boat" or "water." The name most likely originated from the somatic "numbing" effect and feelings of dissociation induced by PCP, and has led to the widespread and mistaken belief that the liquid is made up of or contains real embalming fluid. Occasionally, however, some users and dealers could have, believing this myth, used real embalming fluid mixed with, or in place of, PCP.[27][28] Smoking PCP is known as "getting wet", and a cigarette or joint which has been dipped in PCP may be referred to on the street as a "fry stick," "sherm," "amp," "lovely," "KJ (an abbreviation for 'Killer Joint')," "toe tag", "dipper", "happy stick," or "wet stick." "Getting wet" may have once been a popular method of using PCP, especially in the western United States where it may have been sold for about $10 to $25 per cigarette.[citation needed]

Behavioral effects can vary by dosage. Low doses produce a numbness in the extremities and intoxication, characterized by staggering, unsteady gait, slurred speech, bloodshot eyes, and loss of balance. Moderate doses (5–10 mg intranasal, or 0.01–0.02 mg/kg intramuscular or intravenous) will produce analgesia and anesthesia. High doses may lead to convulsions.[29] Users frequently do not know how much of the drug they are taking due to the tendency of the drug to be made illegally in uncontrolled conditions.[30]

Psychological effects include severe changes in body image, loss of ego boundaries, paranoia and depersonalization. Hallucinations, euphoria, suicidal impulses and aggressive behavior are reported.[29][31] The drug has been known to alter mood states in an unpredictable fashion, causing some individuals to become detached, and others to become animated. Intoxicated individuals may act in an unpredictable fashion, possibly driven by their delusions and hallucinations. PCP may induce feelings of strength, power, and invulnerability as well as a numbing effect on the mind.[5] Occasionally, this leads to bizarre acts of violence.[32] However, studies by the Drug Abuse Warning Network in the 1970s show that media reports of PCP-induced violence are greatly exaggerated and that incidents of violence were unusual and often (but not always) limited to individuals with reputations for aggression regardless of drug use.[33] The reports in question often dealt with a supposed increase in strength imparted by the drug; this could partially be explained by the anaesthetic effects of the drug. The most commonly-cited types of incidents included self-mutilation of various types, breaking handcuffs (a feat reportedly requiring about 550 lbf (2.4 kN) of force), inflicting remarkable property damage, and pulling one's own teeth.[33][34][35]

Included in the portfolio of behavioral disturbances are acts of self-injury including suicide, and attacks on others or destruction of property. The analgesic properties of the drug can cause users to feel less pain, and persist in violent or injurious acts as a result. Recreational doses of the drug can also induce a psychotic state that resembles schizophrenic episodes which can last for months at a time with toxic doses.[36] Users generally report they feel detached from reality, or that one's consciousness seems somewhat disconnected from reality.[37]

Management of phencyclidine intoxication mostly consists of supportive care — controlling breathing, circulation, and body temperature — and, in the early stages, treating psychiatric symptoms.[39][40][41] Benzodiazepines, such as lorazepam, are the drugs of choice to control agitation and seizures (when present). Typical antipsychotics such as phenothiazines and haloperidol have been used to control psychotic symptoms, but may produce many undesirable side effects — such as dystonia — and their use is therefore no longer preferred; phenothiazines are particularly risky, as they may lower the seizure threshold, worsen hyperthermia, and boost the anticholinergic effects of PCP.[39][40] If an antipsychotic is given, intramuscular haloperidol has been recommended.[41][42][43]

Forced acid diuresis (with ammonium chloride or, more safely, ascorbic acid) may increase clearance of PCP from the body, and was somewhat controversially recommended in the past as a decontamination measure.[39][40][41] However, it is now known that only around 10% of a dose of PCP is removed by the kidneys, which would make increased urinary clearance of little consequence; furthermore, urinary acidification is dangerous, as it may induce acidosis and worsen rhabdomyolysis (muscle breakdown), which is not an unusual manifestation of PCP toxicity.[39][40]