Agonist
For other meanings of "agonist" or "agonism", see agonist (disambiguation). For a primary fictional character in a work, see Protagonist and Antagonist. 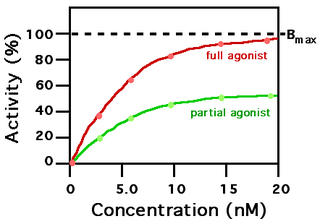 Receptors can be activated or inactivated by either endogenous (such as hormones and neurotransmitters) or exogenous (such as drugs) agonists and antagonists, resulting in the stimulation or inhibition of a biological response. A physiological agonist is a substance that creates the same bodily responses but does not bind to the same receptor.

A superagonist is a compound that is capable of producing a greater maximal response than the endogenous agonist for the target receptor, and thus has an efficacy of more than 100%. This does not necessarily mean that it is more potent than the endogenous agonist, but is rather a comparison of the maximum possible response that can be produced inside the cell following receptor binding.

Partial agonists (such as buspirone, aripiprazole, buprenorphine, or norclozapine) also bind and activate a given receptor, but have only partial efficacy at the receptor relative to a full agonist. One study of benzodiazepine active sedative hypnotics found that partial agonists have just under half the strength of full agonists.[2] Partial agonists such as abecarnil have demonstrated a reduced rate and reduced severity of dependence and withdrawal syndromes.[3]

An inverse agonist is an agent that binds to the same receptor binding-site as an agonist for that receptor and reverses constitutive activity of receptors. Inverse agonists exert the opposite pharmacological effect of a receptor agonist.

A co-agonist works with other co-agonists to produce the desired effect together. NMDA receptor activation requires the binding of both of its glutamate and glycine co-agonists. An antagonist blocks a receptor from activation by agonists.

A selective agonist is selective for one certain type of receptor. It can be of any of the aforementioned types.

New findings that broaden the conventional definition of pharmacology demonstrate that ligands can concurrently behave as agonist and antagonists at the same receptor, depending on effector pathways or tissue type. Terms that describe this phenomenon are "functional selectivity", "protean agonism",[4][5] or selective receptor modulators.[6]

The potency of an agonist is inversely related to its EC50 value. The EC50 can be measured for a given agonist by determining the concentration of agonist needed to elicit half of the maximum biological response of the agonist. The EC50 value is useful for comparing the potency of drugs with similar efficacies producing physiologically similar effects. The smaller the EC50 value, the greater the potency of the agonist the lower the concentration of drug that is required to elicit the maximum biological response.

When a drug is used therapeutically, it is important to understand the margin of safety that exists between the dose needed for the desired effect and the dose that produces unwanted and possibly dangerous side-effects. This relationship, termed the therapeutic index, is defined as the ratio LD50:ED50. In general, the narrower this margin, the more likely it is that the drug will produce unwanted effects. The therapeutic index has many limitations, notably the fact that LD50 cannot be measured in humans and, when measured in animals, is a poor guide to the likelihood of unwanted effects in humans. Nevertheless, the therapeutic index emphasizes the importance of the margin of safety, as distinct from the potency, in determining the usefulness of a drug.