/ˌɛərɨˈpɪprəzoʊl/ air-i-pip-rə-zohl; brand names: Abilify, Aripiprex) is an atypical antipsychotic and antidepressant used in the treatment of schizophrenia, bipolar disorder, and clinical depression. It was approved by the US Food and Drug Administration (FDA) for schizophrenia on November 15, 2002; for acute manic and mixed episodes associated with bipolar disorder on October 1, 2004; as an adjunct for major depressive disorder on November 20, 2007; and to treat irritability in children with autism on 20 November 2009.[1][2] Aripiprazole was developed by Otsuka in Japan, and in the United States, Otsuka America markets it jointly with Bristol-Myers Squibb.

Aripiprazole is used for the treatment of schizophrenia or bipolar disorder.[3]

Aripiprazole has been approved by the FDA for the treatment of acute manic and mixed episodes, in both pediatric patients aged 10–17 and in adults.[4] Several double-blind, placebo-controlled trials support this use.[5][6][7][8] In addition, it is often used as maintenance therapy, either on its own or in conjunction with a mood stabilizer such as lithium or valproate. This use is also supported by a handful of studies.[9][10] Aripiprazole is at least as effective as haloperidol at reducing manic symptoms,[11][unreliable source?] and is much better tolerated by patients.[12]

Aripiprazole's use as a monotherapy in bipolar depression is more controversial. While a few pilot studies have found some effectiveness[13][14] (with one finding a reduction in anhedonia symptoms[15]), two large, double-blind, placebo-controlled studies found no difference between aripiprazole and placebo.[16] One study reported depression as a side effect of the drug.[17]

In 2009, the United States FDA approved aripiprazole to treat irritability in persons with autism.[19] It was approved on the basis of two studies that showed it reduced aggression towards others, self-injury, quickly changing moods, and irritability.

Perhaps owing to its mechanism of action relating to dopamine receptors, there is some evidence to suggest that aripiprazole blocks cocaine-seeking behaviour in animal models without significantly affecting other rewarding behaviours (such as food self-administration).[20]

Aripiprazole should be discontinued gradually, with careful consideration from the prescribing doctor, to avoid withdrawal symptoms or relapse.

Children or adults who ingested acute overdoses have usually manifested central nervous system depression ranging from mild sedation to coma; serum concentrations of aripiprazole and dehydroaripiprazole in these patients were elevated by up to 3-4 fold over normal therapeutic levels, yet to date no deaths have been recorded.[29]

Aripiprazole is a substrate of CYP2D6 and CYP3A4. Coadministration with medications that inhibit (e.g. paroxetine, fluoxetine) or induce (e.g. carbamazepine) these metabolic enzymes are known to increase and decrease, respectively, plasma levels of aripiprazole.[30] As such, anyone taking aripiprazole should be aware that their dosage of aripiprazole may need to be decreased.

Aripiprazole's mechanism of action is different from those of the other FDA-approved atypical antipsychotics (e.g., clozapine, olanzapine, quetiapine, ziprasidone, and risperidone). Rather than antagonizing the D2 receptor, aripiprazole acts as a D2 partial agonist (Ki = 0.34 nM).[33][34] Aripiprazole is also a partial agonist at the 5-HT1A receptor (Ki = 1.65 nM), and like the other atypical antipsychotics displays an antagonist profile at the 5-HT2A receptor (Ki = 0.8 nM).[35][36] It also antagonizes the 5-HT7 receptor (Ki = 39 nM) and acts as a partial agonist at the 5-HT2C receptor (Ki = 15 nM), both with high affinity. The latter action may underlie the minimal weight gain seen in the course of therapy.[37] Aripiprazole has moderate affinity for histamine (Ki = 61 nM), α-adrenergic (Ki = 57 nM), and D4 receptors as well as the serotonin transporter, while it has no appreciable affinity for cholinergic muscarinic receptors.[38]

D2 and D3 receptor occupancy levels are high, with average levels ranging between ~71% at 2 mg/day to ~96% at 40 mg/day.[39][40] Most atypical antipsychotics bind preferentially to extrastriatal receptors, but aripiprazole appears to be less preferential in this regard, as binding rates are high throughout the brain.[41]

Recently, it has been demonstrated that in 5-HT7 receptor knockout mice, aripiprazole does not reduce immobility time in the forced swim test (FST), and actually increases it.[42][43] This implicates 5-HT7 antagonism as playing a major role in aripiprazole's antidepressant effects, similarly to amisulpride.[42][43][44]

Aripiprazole displays linear kinetics and has an elimination half-life of approximately 75 hours. Steady-state plasma concentrations are achieved in about 14 days. Cmax (maximum plasma concentration) is achieved 3–5 hours after oral dosing. Bioavailability of the oral tablets is about 90% and the drug undergoes extensive hepatic metabolization (dehydrogenation, hydroxylation, and N-dealkylation), principally by the enzymes CYP2D6 and CYP3A4. Its only known active metabolite is dehydro-aripiprazole, which typically accumulates to approximately 40% of the aripiprazole concentration. The parenteral drug is excreted only in traces, and its metabolites, active or not, are excreted via feces and urine.[38] When dosed daily, brain concentrations of aripiprazole will increase for a period of 10–14 days, before reaching stable constant levels.[citation needed]

Otsuka's US patent on aripiprazole expires on October 20, 2014;[46] however, due to a pediatric extension, a generic will not become available until at least April 20, 2015.[4] Barr Laboratories (now Teva Pharmaceuticals) initiated a patent challenge under the Hatch-Waxman Act in March 2007.[47] On November 15, 2010, this challenge was rejected by a United States district court in New Jersey.[1][2] 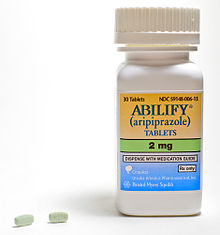