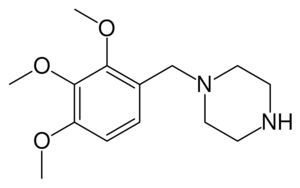 Trimetazidine is a drug for , sometimes referred to by the brand name Vastarel MR. Each tablet contains 35 mg of trimetazidine.Trimetazidine is an anti-ischemic (anti-anginal) metabolic agent, which improves myocardial glucose utilization through stopping of .

By preserving the energy metabolism in cells exposed to hypoxia or , trimetazidine prevents a decrease in intracellular levels, thereby ensuring the proper functioning of ionic pumps and transmembranous sodium-potassium flow whilst maintaining cellular . It also inhibits oxidation of fatty acid in blood vessels.

Controlled studies in angina patients have shown that trimetazidine increases , thereby delaying the onset of ischemia associated with exercise, limits rapid swings in without any significant variations in , significantly decreases the frequency of angina attacks, and leads to a significant decrease in the use of nitrates.

It improves left ventricular function in diabetic patients with . Recently, it has been shown to be effective in patients with of different etiologies.

Trimetazine is described as the first anti-ischemic agent. It acts by directly counteracting all the major metabolic disorders occurring within the ischemic cell. The actions of trimetazidine include limitation of intracellular , correction of disturbances of transmembrane ion exchanges, and prevention of excessive production of free radicals.

Trimetazine is usually prescribed as a long-term treatment of angina pectoris, and in some countries (including France) for and dizziness. It is taken twice a day.

Trimetazine has high safety and tolerability profile. It has no known drug interactions.