Caption = The heart, with cutaways, as viewed from the left side. 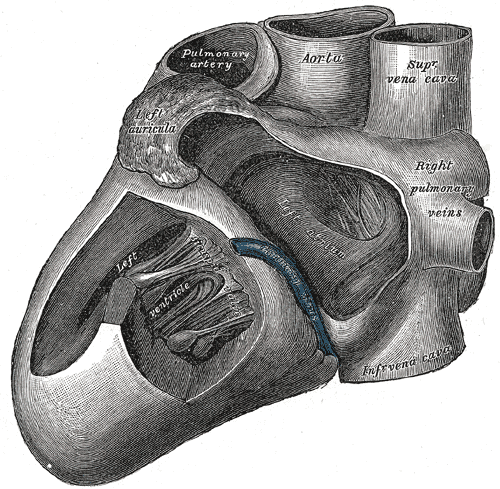 Caption2 = Left ventricle at lower left, cutaway shows some internal cavity detail.
System =
Artery =
Vein =
Precursor = ,
MeshName = Left+Ventricle
MeshNumber = A07.541.560
DorlandsPre = v_06
DorlandsSuf = 12853441
The left ventricle is one of four chambers (two atria and two ventricles) in the . It receives ated from the via the , and pumps it into the via the .

By teenage and adult ages, its walls have thickened to three to six times greater than that of the . This reflects the typical five times greater pressure workload this chamber performs while accepting blood returning from the lungs veins at ~80mmHg pressure (equivalent to around 11 kPa) and pushing it forward to the typical ~120mmHg pressure (around 16.3 kPa) in the aorta during each heartbeat. (The pressures stated are resting values and stated as relative to surrounding atmospheric which is the typical "0" reference pressure used in medicine.)

For excellence of health, the left ventricular muscle must:

* (a) relax very rapidly after each contraction so as to fill rapidly with oxygenated blood flowing from the lung veins, i.e. diastolic relaxation and filling.

* (b) contract rapidly and forcibly to force the majority of this blood into the aorta, overcoming the much higher aortic pressure and the extra pressure required to stretch the aorta and other major arteries enough to expand and make room for the sudden increase in blood volume, i.e. systolic contraction and ejection.

* (c) be able to rapidly increase or decrease its pumping capacity under nervous system control.