Heart chamber is a general term used to refer to any chambers of the mammalian heart. The heart consists of four chambers: the right and left atrium and the right and left ventricle. The top chambers are connected to the bottom chambers by valves and are separated by the coronary sulcus. The left and right side of the heart are separated by the posterior interventricular sulcus. 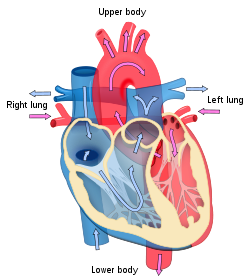 Each heart chamber includes valves vital to the efficiency of the circulatory system. These valves open to allow the blood to flow in the right direction into, within, or out of the heart, and close to prevent the backflow of blood. There are four main valves that allow the chambers of the heart to carry out their function efficiently and they relax and contract during a heartbeat.

The semi-lunar pulmonary valve is located between the right ventricle and the pulmonary trunk. During ventricle systole, the pressure within the chamber will increase until the valve is forced open. De-oxygenated blood can thereby be carried through the pulmonary arteries to each lung. This valve is named because the shape resembles half-moon pockets. When the ventricle relaxes, the pressure within the chamber decreases and blood fills these pockets causing them to close. [1]

The semi-lunar aortic valve is located at the exit of the aorta and the left ventricle. The function of this valve mirrors that of the semi-lunar pulmonary valve, with one exception. Once the pressure in the left ventricle falls back during relaxation phase, oxygenated blood will fill up in the cusps of the semi-lunar aortic valve eventually causing them to close. This blood is what supplies the right and left coronary arteries which distribute blood to the muscle tissues of the heart. [2]

The two ventricles are separated by a septum into the left ventricle and the right ventricle. [3] The ventricles of the heart are muscular chambers because they are responsible for propelling blood out of the heart.[4] The left ventricle is the thickest of the four chambers because it is the final chamber that oxygenated blood must be pumped through before it is distributed throughout the body via the circulatory system. The ventricles are also larger in size compared to the atria.

The right atrium contains the sinoatrial node which sends an impulse throughout the heart causing the cardiac muscle of the atrium to contract in a coordinated, wave-like manner. [5] Since the atria are thin-walled and much less muscular than the ventricles, they are able to easily expand with the addition of blood. The forces of contraction are much weaker within the atria as a result. The contraction is strong enough, however to force 1/4 of the total blood volume entering into the ventricles.[6] The rest of the blood enters the atria passively.