Heart rate is the number of heartbeats per unit of time, typically expressed as beats per minute (bpm). Heart rate can vary as the body's need to absorb oxygen and excrete carbon dioxide changes, such as during exercise or sleep.

The measurement of heart rate is used by medical professionals to assist in the diagnosis and tracking of medical conditions. It is also used by individuals, such as athletes, who are interested in monitoring their heart rate to gain maximum efficiency from their training. The R wave to R wave interval (RR interval) is the inverse of the heart rate.

Heart rate is measured by finding the pulse of the body. This pulse rate can be measured at any point on the body where the artery's pulsation is transmitted to the surface by pressuring it with the index and middle fingers; often it is compressed against an underlying structure like bone. The thumb should not be used for measuring another person's heart rate, as its strong pulse may interfere with correct perception of the target pulse.[1]

Possible points for measuring the heart rate are:

A more precise method of determining pulse involves the use of an electrocardiograph, or ECG (also abbreviated EKG). Continuous electrocardiograph monitoring of the heart is routinely done in many clinical settings, especially in critical care medicine. Commercial heart rate monitors are also available, consisting of a chest strap with electrodes. The signal is transmitted to a wrist receiver for display. Heart rate monitors allow accurate measurements to be taken continuously and can be used during exercise when manual measurement would be difficult or impossible (such as when the hands are being used).

The normal heart rate in children is variable and depends on the child's age. The ranges that should be considered normal are controversial.[4]

The maximum heart rate (HRmax) is the highest heart rate an individual can safely achieve through exercise stress, and depends on age. The most accurate way of measuring HRmax is via a cardiac stress test. In such a test, the subject exercises while being monitored by an EKG. During the test, the intensity of exercise is periodically increased (if a treadmill is being used, through increase in speed or slope of the treadmill), continuing until certain changes in heart function are detected in the EKG, at which point the subject is directed to stop. Typical durations of such a test range from ten to twenty minutes.

Standard textbooks of physiology and medicine mention that heart rate (HR) is readily calculated from the ECG as follows: HR = 1,500/RR interval in millimeters, HR = 60/RR interval in seconds, or HR = 300/number of large squares between successive R waves.[citation needed] In each case, the authors are actually referring to instantaneous HR, which is the number of times the heart would beat if successive RR intervals were constant.

Conducting a maximal exercise test can require expensive equipment. People just beginning an exercise regimen are normally advised to perform this test only in the presence of medical staff due to risks associated with high heart rates. For general purposes, people instead typically use a formula to estimate their individual maximum heart rate. 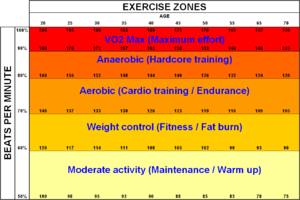 The most common formula encountered, with no indication of standard deviation, is:

The formula has been attributed to various sources, but is widely thought to have been devised in 1970 by Dr. William Haskell and Dr. Samuel Fox.[5] Inquiry into the history of this formula reveals that it was not developed from original research, but resulted from observation based on data from approximately 11 references consisting of published research or unpublished scientific compilations.[6] It gained widespread use through being used by Polar Electro in its heart rate monitors,[5] which Dr. Haskell has "laughed about",[5] as it "was never supposed to be an absolute guide to rule people's training."[5]

While the most common (and easy to remember and calculate), this particular formula is not considered by reputable health and fitness professionals to be a good predictor of HRmax. Despite the widespread publication of this formula, research spanning two decades reveals its large inherent error (Sxy = 7–11 b/min). Consequently, the estimation calculated by HRmax = 220 − age has neither the accuracy nor the scientific merit for use in exercise physiology and related fields.[6]

A 2002 study[6] of 43 different formulae for HRmax (including the one above) concluded the following:

This was found to have a standard deviation that, although large (6.4 bpm), was still considered to be acceptable for the use of prescribing exercise training HR ranges.

Other often cited formulae are:

(Often attributed to "Londeree and Moeschberger from the University of Missouri")

(Another "tweak" to the traditional formula is known as the Tanaka method. Based on a study of thousands of individuals, a new formula was devised which is believed to be more accurate).[7]

These figures are very much averages, and depend greatly on individual physiology and fitness. For example an endurance runner's rates will typically be lower due to the increased size of the heart required to support the exercise, while a sprinter's rates will be higher due to the improved response time and short duration. While each may have predicted heart rates of 180 (= 220 − age), these two people could have actual HRmax 20 beats apart (e.g., 170–190).

Further, note that individuals of the same age, the same training, in the same sport, on the same team, can have actual HRmax 60 bpm apart (160 to 220):[5] the range is extremely broad, and some say "The heart rate is probably the least important variable in comparing athletes."[5]

The 2010 research conducted at Northwestern University revised the maximum heart rate formula for women. According to Martha Gulati, et al., it is:

The Target Heart Rate or Training Heart Rate (THR) is a desired range of heart rate reached during aerobic exercise which enables one's heart and lungs to receive the most benefit from a workout. This theoretical range varies based mostly on age; however, a person's physical condition, gender, and previous training also are used in the calculation. Below are two ways to calculate one's THR. In each of these methods, there is an element called "intensity" which is expressed As a percentage. The THR can Be calculated As a range of 65%–85% intensity. However, it is crucial to derive an accurate HRmax to ensure these calculations are meaningful (see above).

An alternative to the Karvonen method is the Zoladz method, which derives exercise zones by subtracting values from HRmax:

Example for someone with a HRmax of 180:

This is often used to gauge exercise intensity (first used in 1957 by Karvonen).[13]

Karvonen's study findings have been questioned, due to the following:
- The study did not use VO2 data to develop the equation.
- Only six subjects were used, and the correlation between the percentages of HRR and VO2 max was not statistically significant.[14]

Recovery heart rate is the heart rate measured at a fixed (or reference) period after ceasing activity, typically measured over a one minute period.

A greater reduction in heart rate after exercise during the reference period indicates a better-conditioned heart. Heart rates that do not drop by more than 12 bpm one minute after stopping exercise are associated with an increased risk of death.[15]

Training regimes sometimes use recovery heart rate as a guide of progress and to spot problems such as overheating or dehydration.[16] After even short periods of hard exercise it can take a long time (about 30 minutes) for the heart rate to drop to rested levels.

Tachycardia is a resting heart rate more than 100 beats per minute. This number can vary as smaller people and children have faster heart rates than average adults.

Bradycardia is defined as a heart rate less than 60 beats per minute although it is seldom symptomatic until below 50 bpm when a human is at total rest. Bradycardia may be associated with medical conditions such as hypothyroidism.

Trained athletes tend to have slow resting heart rates, and resting bradycardia in athletes should not be considered abnormal if the individual has no symptoms associated with it. For example Miguel Indurain, a Spanish cyclist and five time Tour de France winner, had a resting heart rate of 28 beats per minute, one of the lowest ever recorded in a healthy human. Again, this number can vary as children and small adults tend to have faster heart rates than average adults.

Arrhythmias are abnormalities of the heart rate and rhythm (sometimes felt as palpitations). They can be divided into two broad categories: fast and slow heart rates. Some cause few or minimal symptoms. Others produce more serious symptoms of lightheadedness, dizziness and fainting.

A body with a ventricular assist device, or VAD, installed as an aid to a failing heart will sometimes have no heart beat or pulse and therefore no heart rate, because many VADs are continuous flow pumps.

As a risk factor

An Australian-led international study of patients with cardiovascular disease has shown that heart beat rate is a key indicator for the risk of heart attack. The study, published in The Lancet (September 2008) studied 11,000 people, across 33 countries, who were being treated for heart problems. Those patients whose heart rate was above 70 beats per minute had significantly higher incidence of heart attacks, hospital admissions and the need for surgery. University of Sydney professor of cardiology Ben Freedman from Sydney's Concord hospital, said "If you have a high heart rate there was an increase in heart attack, there was about a 46 percent increase in hospitalizations for non-fatal or fatal heart attack."[18]

Standard textbooks of physiology and medicine mention that heart rate (HR) is readily calculated from the ECG as follows:

HR = 1,500/RR interval in millimeters, HR = 60/RR interval in seconds, or HR = 300/number of large squares between successive R waves. In each case, the authors are actually referring to instantaneous HR, which is the number of times the heart would beat if successive RR intervals were constant. However, because the above formula is almost always mentioned, students determine HR this way without looking at the ECG any further.