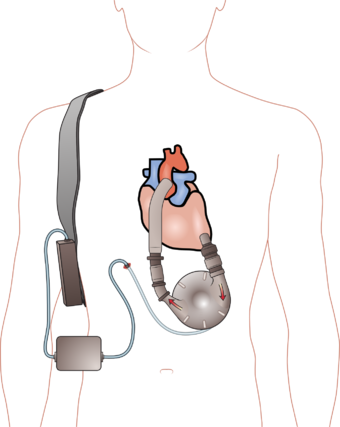 Graphic describing a Left Ventricular Assist Device (LVAD). The device pumps blood from the left ventricle to the aorta.

A Ventricular assist device, or VAD, is a mechanical circulatory device that is used to partially or completely replace the function of a failing heart. Some VADs are intended for short term use, typically for patients recovering from heart attacks or heart surgery, while others are intended for long term use (months to years and in some cases for life), typically for patients suffering from congestive heart failure.

VADs need to be clearly distinguished from artificial hearts, which are designed to completely take over cardiac function and generally require the removal of the patient's heart.

VADs are designed to assist either the right (RVAD) or left (LVAD) ventricle, or both at once (BiVAD). Which of these types is used depends primarily on the underlying heart disease and the pulmonary arterial resistance that determines the load on the right ventricle.

LVADs are most commonly used, but when pulmonary arterial resistance is high, right ventricular assistance becomes necessary. Long term VADs are normally used to keep patients alive with a good quality of life while they wait for a heart transplantation (known as a "bridge to transplantation"). However, LVADs are sometimes used as destination therapy and sometimes as a bridge to recovery.[1][2]

In the last few years, VADs have improved significantly in terms of providing survival and quality of life among recipients.[3]

The pumps used in VADs can be divided into two main categories - pulsatile pumps, that mimic the natural pulsing action of the heart, and continuous flow pumps.[4]

Pulsatile VADs use positive displacement pumps. In some of these pumps, the volume occupied by blood varies during the pumping cycle, and if the pump is contained inside the body then a vent tube to the outside air is required.

Continuous flow VADs normally use either centrifugal pumps or an axial flow pump. Both types have a central rotor containing permanent magnets. Controlled electric currents running through coils contained in the pump housing apply forces to the magnets, which in turn cause the rotors to spin. In the centrifugal pumps, the rotors are shaped to accelerate the blood circumferentially and thereby cause it to move toward the outer rim of the pump, whereas in the axial flow pumps the rotors are more or less cylindrical with blades that are helical, causing the blood to be accelerated in the direction of the rotor's axis.[5]

An important issue with continuous flow pumps is the method used to suspend the rotor. Early versions used solid bearings; however, newer pumps, some of which are approved for use in the EU use either electromagnetic or hydrodynamic suspension. These pumps contain only one moving part.[citation needed]

The early VADs emulated the heart by using a "pulsatile" action where blood is alternately sucked into the pump from the left ventricle then forced out into the aorta. Devices of this kind include the HeartMate IP LVAS, which was approved for use in the US by the FDA in October 1994. These devices are commonly referred to as first generation VADs.[citation needed]

More recent work has concentrated on continuous flow pumps, which can be roughly categorized as either centrifugal pumps or axial flow impeller driven pumps. These pumps have the advantage of greater simplicity resulting in smaller size and greater reliability. These devices are referred to as second generation VADs. A side effect is that the user will not have a pulse, or that the pulse intensity will be seriously reduced, and will need to carry documentation saying that the lack of a pulse does not mean that they are dead.

Third generation VADs suspend the impeller in the pump using either hydrodynamic or electromagnetic suspension, thus removing the need for bearings and reducing the number of moving parts to one.[citation needed]

Another technology undergoing clinical trials is the use of trans cutaneous induction to power and control the device rather than using percutaneous cables. Apart from the obvious cosmetic advantage this reduces the risk of infection and the consequent need to take preventative action. A pulsatile pump using this technology has CE Mark approval and is in clinical trials for US FDA approval.[citation needed]

A very different approach in the early stages of development is the use of an inflatable cuff around the aorta. Inflating the cuff contracts the aorta and deflating the cuff allows the aorta to expand - in effect the aorta becomes a second left ventricle. A proposed refinement is to use the patient's skeletal muscle, driven by a pacemaker, to power this device which would make it truly self contained. However a similar operation (cardiomyoplasty) was tried in the 1990s with disappointing results. In any case, it has substantial potential advantages in avoiding the need to operate on the heart itself and in avoiding any contact between blood and the device. Interestingly this approach involves a return to a pulsatile flow.[citation needed]

A series of studies involving the use of the of HeartMate II LVAD have proven useful in establishing the viability and risks of using LVADs for bridge-to-transplantation and destination therapy.

To date, 73% (11 of 15) of patients who underwent the combination therapy regimen demonstrated sufficient recovery to allow explantation and avoid heart transplantation; freedom from recurrent heart failure in surviving patients was 100% and 89% at one and four years after explantation, respectively; average ejection fraction was 64% at 59 months after explantation - all patients were NYHA Class I; and no significant adverse effects were reported with clenbuterol therapy.

The REMATCH (Randomized Evaluation of Mechanical Assistance for the Treatment of Congestive Heart Failure) clinical trial began in May 1998 and ran through July 2001 in 20 cardiac transplant centers around the country. The trial was designed to compare long-term implantation of left ventricular assist devices with optimal medical management for patients with end-stage heart failure who require, but do not qualify to receive cardiac transplantation. As a result of the clinical outcomes, the device received FDA approval for both indications, in 2001 and 2003, respectively.[24]

The trial demonstrated an 81% improvement in two-year survival among patients receiving HeartMate XVE compared to optimal medical management. In addition, a destination therapy study following the REMATCH trial demonstrated an additional 17% improvement (61% vs. 52%) in one-year survival of patients that were implanted with a VAD (HeartMate XVE), with an implication for the appropriate selection of candidates and timing of VAD implantation.

A test carried out in 2001 by Dr. Eric A. Rose and REMATCH study group with patients with congestive heart failure that were ineligible for a transplant showed a survival at two years of 23% for those implanted with an LVAD compared with 8% for those who were treated with drugs. The two major complications of VAD implantation were infection and mechanical failure (see below).

Complications and side effects

Because the devices generally result in blood flowing over a non biologic surface, predisposing the blood to clotting, there is need for anticoagulation measures. One device, the HeartMate XVE, is designed with a biologic surface derived from fibrin and does not require long term anticoagulation (except aspirin); unfortunately, this biologic surface may also predispose the patient to infection through selective reduction of certain types of leukocytes.[26]

New VAD designs which are now approved for use in the European Community and are undergoing trials for FDA approval have all but eliminated mechanical failure.

VAD-related infection can be caused by a large number of different organisms:[27]

Treatment of VAD-related infection is exceedingly difficult and many patients die of infection despite optimal treatment. Initial treatment should be with broad spectrum antibiotics, but every effort must be made to obtain appropriate samples for culture. A final decision regarding antibiotic therapy must be based on the results of microbiogical cultures.[citation needed]

Other problems include immunosuppression, clotting with resultant stroke, and bleeding secondary to anticoagulation. It is interesting to note that some of the polyurethane components used in the devices cause the deletion of a subset of immune cells when blood comes in contact with them. This predisposes the patient to fungal and some viral infections necessitating appropriate prophylactic therapy.[28]

As of July 2007, 69 year old Peter Houghton was the longest surviving recipient of a VAD for permanent use. He received an experimental Jarvik 2000 LVAD in June 2000. Since then, he completed a 91 mile charity walk, published two books, lectured widely, hiked in the Swiss Alps and the American West, flew in an ultra-light aircraft, and traveled extensively around the world. He died of acute renal failure in 2007.[29][30]

VADs extend the quantity of life. People who have had VADs implanted have had lower rates of depression than those people suffering from cardiac disease that have not undergone implantation surgery.

In a small number of cases left ventricular assist devices, combined with drug therapy, have enabled the heart to recover sufficiently for the device to be able to be removed (explanted).[1][2]

The majority of VADs on the market today are somewhat bulky. The smallest device approved by the FDA, the HeartMate II, weighs about 1 pound (0.45 kg) and measures 3 inches (7.6 cm). This has proven particularly important for women and children, for whom alternatives would have been too large[31]

One device gained CE Mark approval for use in the EU and began clinical trials in the US (VentrAssist). As at June 2007 these pumps had been implanted in over 100 patients including a 10 year old girl. In one case the original heart recovered after the device had been implanted for a year and the device was able to be removed. In 2009, Ventracor was placed into the hands of Administrators due to financial problems and was later that year liquidated. No other companies purchased the technology, so as a result the VentrAssist device was essentially defunct. Around 30-50 patients worldwide remain supported on VentrAssist devices at January 2010.

The Heartware HVAD works very similarly to the VentrAssist - albeit very much smaller and not requiring an abdominal pocket to be implanted into. The device has obtained CE Mark in Europe and is currently in clinical trials in the USA.