In medicine (obstetrics), cardiotocography (CTG) is a technical means of recording (-graphy) the fetal heartbeat (cardio-) and the uterine contractions (-toco-) during pregnancy, typically in the third trimester. The machine used to perform the monitoring is called a cardiotocograph, more commonly known as an electronic fetal monitor (EFM). 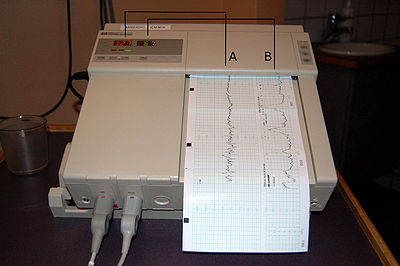 Schematic explanation of cardiotocography: heart rate (A) is calculated from fetal heart motion determined by ultrasound, and uterine contractions are measured by a pressure transducer (B). These numbers are represented on a time scale with the help of a running piece of paper, producing a graphical representation.

Simultaneous recordings are performed by two separate transducers, one for the measurement of the fetal heart rate and a second one for the uterine contractions. Each of the transducers may be either external or internal.

External measurement means taping or strapping the two sensors to the abdominal wall. The heart ultrasonic sensor, similar to a Doppler fetal monitor, detects motion of the fetal heart. The pressure-sensitive contraction transducer, called a tocodynamometer (toco), measures the tension of the maternal abdominal wall - an indirect measure of the intrauterine pressure.

Internal measurement requires a certain degree of cervical dilatation, as it involves inserting a pressure catheter into the uterine cavity, as well as attaching a scalp electrode to the fetal head to adequately measure the electric activity of the fetal heart. Internal measurement is more precise, and might be preferable when a complicated childbirth is expected.

A typical CTG reading is printed on paper and/or stored on a computer for later reference. Use of CTG and a computer network, allows continual remote surveillance: a single obstetrical nurse, midwife, or obstetrician can watch the CTG traces of multiple patients simultaneously, via a computer station. 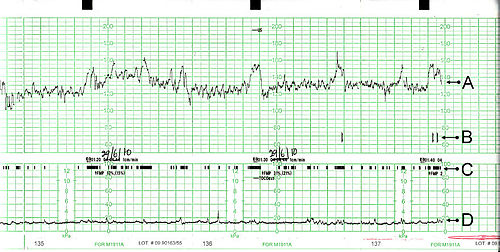 A typical CTG output for a woman not in labour. A: Fetal heartbeat; B: Indicator showing movements felt by mother (caused by pressing a button); C: Fetal movement; D: Uterine contractions

In the US, the Eunice Kennedy Shriver National Institute of Child Health and Human Development sponsored a workshop to develop a standardized nomenclature for use in interpreting intrapartum fetal heart rate and uterine contraction patterns. This nomenclature has been adopted by the Association of Women’s Health, Obstetric, and Neonatal Nurses (AWHONN), the American College of Obstetricians and Gynecologists (ACOG), and the Society for Maternal-Fetal Medicine. [1]

Interpretation of a CTG tracing requires both qualitative and quantitative description of:

There are several factors used in assessing uterine activity.

The NICHD nomenclature[1] defines uterine activity by quantifying the number of contractions present in a 10-minute window, averaged over 30 minutes. Uterine activity may be defined as:

Additionally decelerations can be recurrent or intermittent based on their frequency (more or less than 50% of the time) within a 20 min window.[1]

The NICHD workgroup proposed terminology of a three-tiered system to replace the older undefined terms "reassuring" and "nonreassuring".[1]

A Cochrane Collaboration review has shown that use of cardiotocography reduces the rate of seizures in the newborn, but there is no clear benefit in the prevention of cerebral palsy, perinatal death and other complications of labour. In contrast, labour monitored by CTG is slightly more likely to result in instrumental delivery (forceps or vacuum extraction) or Cesarean section.[4] The false-positive rate of cardiotocography for cerebral palsy is given as high as 99%, meaning that only 1-2 of one hundred babies with non-reassuring patterns will develop cerebral palsy.[5] The introduction of additional methods of intrapartum assessment has given mixed results.[6]

When introduced, this practice was expected to reduce the incidence of fetal demise in labor and make for a reduction in cerebral palsy (CP). Its use became almost universal for hospital births in the U.S. In recent years there has been some controversy as to the utility of the cardiotocograph in low-risk pregnancies, and the related belief that over-reliance on the test has led to increased misdiagnoses of fetal distress and hence increased (and possibly unnecessary) cesarean deliveries.[7]