The uterus (from Latin "uterus", plural uteri or "uteruses") or womb is a major female hormone-responsive reproductive sex organ of most mammals including humans. One end, the cervix, opens into the vagina, while the other is connected to one or both fallopian tubes, depending on the species. It is within the uterus that the fetus develops during gestation, usually developing completely in placental mammals such as humans and partially in marsupials such as kangaroos and opossums. Two uteruses usually form initially in a female fetus, and in placental mammals they may partially or completely fuse into a single uterus depending on the species. In many species with two uteruses, only one is functional. Humans and other higher primates such as chimpanzees, along with horses, usually have a single completely fused uterus, although in some individuals the uteruses may not have completely fused. The term uterus is used consistently within the medical and related professions, while the Germanic derived term womb is also common in everyday usage in the English language.

Most animals that lay eggs, such as birds and reptiles, including most ovoviviparous species, have an oviduct instead of a uterus. Note however, that recent research into the biology of the viviparous (not merely ovoviviparous) skink Trachylepis ivensi has revealed development of a very close analogue to eutherian mammalian placental development.[1]

In monotremes, mammals which lay eggs, namely the platypus and the echidnas, either the term uterus or oviduct is used to describe the same organ, but the egg does not develop a placenta within the mother and thus does not receive further nourishment after formation and fertilization.

Marsupials have two uteruses, each of which connect to a lateral vagina and which both use a third, middle "vagina" which functions as the birth canal. Marsupial embryos form a choriovitelline "placenta" (which can be thought of as something between a monotreme egg and a "true" placenta), in which the egg's yolk sac supplies a large part of the embryo's nutrition but also attaches to the uterine wall and takes nutrients from the mother's bloodstream.

The uterus consists of a body and a cervix.The cervix protrudes into the vagina. The uterus is held in position within the pelvis by condensations of endopelvic fascia, which are called ligaments. These ligaments include the pubocervical, transverse. cervical ligaments cardinal ligaments, and the uterosacral ligaments. It is covered by a sheet-like fold of peritoneum, the broad ligament.[2]

The uterus is essential in sexual response by directing blood flow to the pelvis and to the external genitalia, including the ovaries, vagina, labia, and clitoris.

The reproductive function of the uterus is to accept a fertilized ovum which passes through the utero-tubal junction from the fallopian tube. It implants into the endometrium, and derives nourishment from blood vessels which develop exclusively for this purpose. The fertilized ovum becomes an embryo, attaches to a wall of the uterus, creates a placenta, and develops into a fetus (gestates) until childbirth. Due to anatomical barriers such as the pelvis, the uterus is pushed partially into the abdomen due to its expansion during pregnancy. Even during pregnancy the mass of a human uterus amounts to only about a kilogram (2.2 pounds). 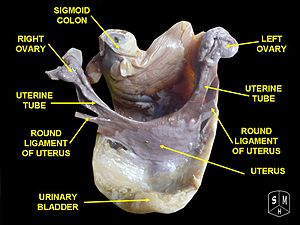 In mammals, the four main forms in which it is found are:

Duplex
There are two wholly separate uteri, with one fallopian tube each. Found in marsupials (such as kangaroos, Tasmanian devils, opossums, etc.), rodents (such as mice, rats, and guinea pigs), and lagomorpha (rabbits and hares).
Bipartite
The two uteri are separate for most of their length, but share a single cervix. Found in ruminants (deer, moose, elk etc.), and cats.
Bicornuate
The upper parts of the uterus remain separate, but the lower parts are fused into a single structure. Found in dogs, pigs, elephants, whales, dolphins, and prosimian primates among others.
Simplex
The entire uterus is fused into a single organ. Found in higher primates (including humans and chimpanzees) . Occasionally, some individual females (including humans) may have a bicornuate uterus, a uterine malformation where the two parts of the uterus fail to fuse completely during fetal development.

In monotremes such as the platypus, the uterus is duplex and rather than nurturing the embryo, secretes the shell around the egg. It is essentially identical with the shell gland of birds and reptiles, with which the uterus is homologous.[3]

The uterus is located inside the pelvis immediately dorsal (and usually somewhat rostral) to the urinary bladder and ventral to the rectum. The human uterus is pear-shaped and about 3 in. (7.6 cm) long. A female's uterus can be divided anatomically into four segments: The fundus, corpus, cervix and the internal os.

From outside to inside, the path to the uterus is as follows:

The layers, from innermost to outermost, are as follows:

Endometrium
The lining of the uterine cavity is called the "endometrium". It consists of the functional endometrium and the basal endometrium from which the former arises. Damage to the basal endometrium results in adhesion formation and/or fibrosis (Asherman's syndrome). In all placental mammals, including humans, the endometrium builds a lining periodically which is shed or reabsorbed if no pregnancy occurs. Shedding of the functional endometrial lining is responsible for menstrual bleeding (known colloquially as a "period" in humans with a cycle of about 28 days) throughout the fertile years of a female and for some time beyond. Depending on the species, menstrual cycles may vary from a few days to six months, but can vary widely even in the same individual, often stopping for several cycles before resuming. Marsupials and monotremes do not have menstruation.
Myometrium
The uterus mostly consists of smooth muscle, known as "myometrium." The innermost layer of myometrium is known as the junctional zone, which becomes thickened in adenomyosis.
Parametrium
The loose connective tissue around the uterus.
Perimetrium
The peritoneum covering of the fundus and ventral and dorsal aspects of the uterus.

The uterus is primarily supported by the pelvic diaphragm, perineal body and the urogenital diaphragm. Secondarily, it is supported by ligaments and the peritoneum (broad ligament of uterus)[4]

Normally the uterus lies in anteversion & anteflexion.Antiversion is a forward angle between the axis of the cervix and that of the vagina measuring about 90 degree,provided the urinary bladder and the rectum are empty.Antiflexion is a forward angle between the body and cervix at the isthmus measuring about 125 degree,provided the bladder and rectum are empty.

It is held in place by several peritoneal ligaments, of which the following are the most important (there are two of each):

The uterus is in the middle of the pelvic cavity in frontal plane (due to ligamentum latum uteri). The fundus does not surpass the linea terminalis, while the vaginal part of the cervix does not extend below interspinal line. The uterus is mobile and moves under the pressure of the full bladder or full rectum anteriorly, whereas if both are full it moves upwards. Increased intraabdominal pressure pushes it downwards. The mobility is conferred to it by musculo-fibrous apparatus that consists of suspensory and sustentacular part. Under normal circumstances the suspensory part keeps the uterus in anteflexion and anteversion (in 90% of women) and keeps it "floating" in the pelvis. The meaning of these terms are described below:

The pathological changes of the position of the uterus are:

In cases where the uterus is "tipped", also known as retroverted uterus, women may have symptoms of pain during sexual intercourse, pelvic pain during menstruation, minor incontinence, urinary track infections, problems trying to conceive, and difficulty using tampons. A pelvic examination by a doctor can determine if a uterus is tipped.[5]

Vessels of the uterus and its appendages, rear view. 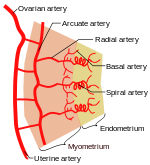 Schematic diagram of uterine arterial vasculature seen as a cross-section through the myometrium and endometrium.

The uterus is supplied by arterial blood both from the uterine artery and the ovarian artery.

The bilateral Müllerian ducts form during early fetal life. In males, MIF secreted from the testes leads to their regression. In females these ducts give rise to the Fallopian tubes and the uterus. In humans the lower segments of the two ducts fuse to form a single uterus, however, in cases of uterine malformations this development may be disturbed. The different uterine forms in various mammals are due to various degrees of fusion of the two Müllerian ducts.

Some pathological states include: