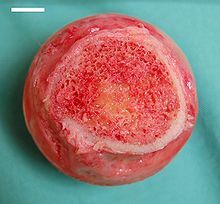 A femur with a cortex of cortical bone and medulla of trabecular bone, showing its red bone marrow and a focus of yellow bone marrow.

There are two types of bone marrow: medulla ossium rubra (red marrow - consisting mainly of hematopoietic tissue) and medulla ossium flava (yellow marrow - consisting mainly of fat cells). Red blood cells, platelets and most white blood cells arise in red marrow. Both types of bone marrow contain numerous blood vessels and capillaries. At birth, all bone marrow is red. With age, more and more of it is converted to the yellow type; only around half of adult bone marrow is red. Red marrow is found mainly in the flat bones, such as the hip bone, breast bone, cranium, ribs, vertebrae and shoulder blades, and in the cancellous ("spongy") material at the epiphyseal ends of long bones such as the femur and humerus. Yellow marrow is found in the medullary cavity, the hollow interior of the middle portion of long bones. In cases of severe blood loss, the body can convert yellow marrow back to red marrow to increase blood cell production. 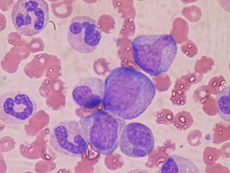 Hematopoietic precursor cells: promyelocyte in the center, two metamyelocytes next to it and band cells from a bone marrow aspirate.

In addition, the bone marrow contains hematopoietic stem cells, which give rise to the three classes of blood cells that are found in the circulation: white blood cells (leukocytes), red blood cells (erythrocytes), and platelets (thrombocytes).[2]

There is biologic compartmentalization in the bone marrow, in that certain cell types tend to aggregate in specific areas. For instance, erythrocytes, macrophages, and their precursors tend to gather around blood vessels, while granulocytes gather at the borders of the bone marrow.

The normal bone marrow architecture can be displaced by malignancies, aplastic anemia, or infections such as tuberculosis, leading to a decrease in the production of blood cells and blood platelets. In addition, cancers of the hematologic progenitor cells in the bone marrow can arise; these are the leukemias.

Exposure to radiation or chemotherapy will kill many of the rapidly dividing cells of the bone marrow, and will therefore result in a depressed immune system. Many of the symptoms of radiation sickness are due to damage to the bone marrow cells.

To diagnose diseases involving the bone marrow, a bone marrow aspiration is sometimes performed. This typically involves using a hollow needle to acquire a sample of red bone marrow from the crest of the ilium under general or local anesthesia. 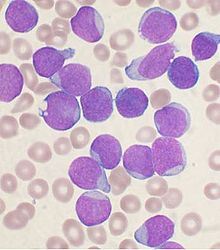 A Wright's-stained bone marrow aspirate smear from a patient with leukemia.

Donation and transplantation of bone marrow

A bone marrow harvest in progress.

In a bone marrow transplant, hematopoietic stem cells are removed from a person and infused into another person (allogenic) or into the same person at a later time (autologous). If donor and recipient are compatible, these infused cells will then travel to the bone marrow and initiate blood cell production. Transplantation from one person to another is performed in severe cases of disease of the bone marrow. The patient's marrow is first killed off with drugs or radiation, and then the new stem cells are introduced. Before radiation therapy or chemotherapy in cases of cancer, some of the patient's hematopoietic stem cells are sometimes harvested and later infused back when the therapy is finished to restore the immune system.

The stem cells are harvested directly from the red marrow in the crest of the ilium, often under general anesthesia. The procedure is minimally invasive and does not require stitches afterwards. Depending on the donor health and reaction to the procedure, the actual harvesting can be an outpatient procedure or requiring 1–2 days of recovery in the hospital.[4] Another option is to administer certain drugs that stimulate the release of stem cells from the bone marrow into circulating blood.[5] An IV is inserted into the donor's arm, and the stem cells are filtered out of the blood. The procedure is similar to donating blood or platelets. It may also be taken from the sternum. The tibia may seem a good source, since it is very superficial. However, except in children, this bone marrow does not contain any substantial amount of red bone marrow, only yellow bone marrow.[6] In newborns, stem cells may be retrieved from the umbilical cord.[7]

Bone marrow as a food 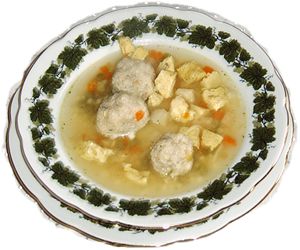 In some parts of Germany, beef soup is served with "Markklößchen" (bone marrow balls).

Many cultures have utilized bone marrow as a food throughout history. Some anthropologists believe that early humans were scavengers rather than hunters. Marrow would then have been a food source (largely for its fat content) for tool-using hominids, who were able to crack open the bones of carcasses left by apex predators such as lions.[8]

In Vietnam, beef bone marrow is used as the soup base for the national staple dish, phở, while in the Philippines, the soup bulalo is made primarily of beef stock and marrow bones, seasoned with vegetables and boiled meat; a similar soup in the Philippines is called kansi.[9] In Indonesia, bone marrow is called sumsum and can be found especially in Minangkabau cuisine. Sumsum is often cooked as soup or as gulai (a curry-like dish). In India and Pakistan, slow-cooked marrow is the core ingredient of the dish nalli nihari.

In Hungary, tibia is a main ingredient of beef soup; the bone is chopped into short (10–15 cm) pieces and the ends are covered with salt to prevent the marrow from leaking from the bone while cooking. Upon serving the soup, the marrow is usually spread on toast.

In Iranian cuisine, lamb shanks are usually broken before cooking to allow diners to suck out and eat the marrow when the dish is served. Similar practices are also common in Pakistani cuisine. Some Native Alaskans eat the bone marrow of caribou and moose.

European diners in the 18th century often used a marrow scoop (or marrow spoon), often of silver and with a long thin bowl, as a table implement for removing marrow from a bone.

Though once used in various preparations, including pemmican, bone marrow's popularity is now relatively limited in the western world. Nonetheless, it remains in use in some gourmet restaurants and is popular among food enthusiasts.[10]