White blood cells, or leukocytes (also spelled "leucocytes", leuco- Ancient Greek "white"), are cells of the immune system involved in defending the body against both infectious disease and foreign materials. Five[1] different and diverse types of leukocytes exist, but they are all produced and derived from a multipotent cell in the bone marrow known as a hematopoietic stem cell. They live for about 3 to 4 days in the average human body. Leukocytes are found throughout the body, including the blood and lymphatic system.[2]

The number of leukocytes in the blood is often an indicator of disease. There are normally between 4×109 and 1.1×1010 white blood cells in a litre of blood, and ranging from 7 and 21 micrometres in diameter, they make up approximately 1% of blood in a healthy adult.[3] An increase in the number of leukocytes over the upper limits is called leukocytosis, and a decrease below the lower limit is called leukopenia. The physical properties of leukocytes, such as volume, conductivity, and granularity, may change due to activation, the presence of immature cells, or the presence of malignant leukocytes in leukemia.

The name "white blood cell" derives from the fact that after centrifugation of a blood sample, the white cells are found in the buffy coat, a thin, typically white layer of nucleated cells between the sedimented red blood cells and the blood plasma. The scientific term leukocyte directly reflects this description, derived from Ancient Greek λευκό (white), and κύτταρο (cell). Blood plasma may sometimes be green if there are large amounts of neutrophils in the sample, due to the heme-containing enzyme myeloperoxidase that they produce.

There are several different types of white blood cells. They all have many things in common, but are all distinct in form and function. A major distinguishing feature of some leukocytes is the presence of granules; white blood cells are often characterized as granulocytes or agranulocytes: 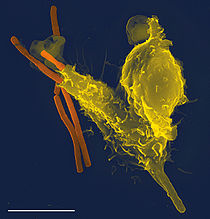 Neutrophils defend against bacterial or fungal infection and other very small inflammatory processes that are usually first responders to microbial infection; their activity and death in large numbers forms pus. They are commonly referred to as polymorphonuclear (PMN) leukocytes, although technically PMN refers to all granulocytes. They have a multi-lobed nucleus which may appear like multiple nuclei, hence the name polymorphonuclear leukocyte. The cytoplasm may look transparent because of fine granules that are pale lilac. Neutrophils are very active in phagocytosing bacteria and are present in large amount in the pus of wounds. These cells are not able to renew their lysosomes (used in digesting microbes) and die after having phagocytosed a few pathogens.[9] Neutrophils are the most common cell type seen in the early stages of acute inflammation, and make up 60-70% of total leukocyte count in human blood.[3] The life span of a circulating human neutrophil is about 5.4 days.[10]

Eosinophils primarily deal with parasitic infections. Eosinophils are also the predominant inflammatory cells in allergic reactions. The most important causes of eosinophilia include allergies such as asthma, hay fever, and hives; and also parasitic infections. Generally their nucleus is bi-lobed. The cytoplasm is full of granules which assume a characteristic pink-orange color with eosin stain.

Basophils are chiefly responsible for allergic and antigen response by releasing the chemical histamine causing vasodilation. The nucleus is bi- or tri-lobed, but it is hard to see because of the number of coarse granules which hide it. They are characterized by their large blue granules.

Lymphocytes are much more common in the lymphatic system. Lymphocytes are distinguished by having a deeply staining nucleus which may be eccentric in location, and a relatively small amount of cytoplasm. The blood has three types of lymphocytes:

Monocytes share the "vacuum cleaner" (phagocytosis) function of neutrophils, but are much longer lived as they have an additional role: they present pieces of pathogens to T cells so that the pathogens may be recognized again and killed, or so that an antibody response may be mounted. Monocytes eventually leave the bloodstream to become tissue macrophages which remove dead cell debris as well as attacking microorganisms. Neither of these can be dealt with effectively by the neutrophils. Unlike neutrophils, monocytes are able to replace their lysosomal contents and are thought to have a much longer active life. They have the kidney shaped nucleus and are typically agranulated. They also possess abundant cytoplasm.

Once monocytes move from the bloodstream out into the body tissues, they undergo changes (differentiate) allowing phagocytosis and are then known as macrophages.

Some medications can have an impact on the number and function of white blood cells. Leukopenia is the reduction in the number of white blood cells, which may affect the overall white cell count or one of the specific populations of white blood cells. For example, if the number of neutrophils is low, the condition is known as neutropenia. Likewise, low lymphocyte levels are termed lymphopenia. Medications which can cause leukopenia include clozapine, an antipsychotic medication with a rare adverse effect leading to the total absence of all granulocytes (neutrophils, basophils, eosinophils). Other medications include immunosuppressive drugs, such as sirolimus, mycophenolate mofetil, tacrolimus, and cyclosporine. Interferons used to treat multiple sclerosis, like Rebif, Avonex, and Betaseron, can also cause leukopenia. 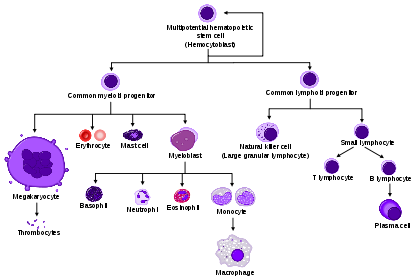 Some leukocytes migrate into the tissues of the body to take up a permanent residence at that location rather than remaining in the blood. Often these cells have specific names depending upon which tissue they settle in, such as fixed macrophages in the liver which become known as Kupffer cells. These cells still serve a role in the immune system.