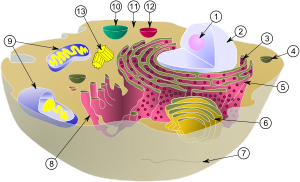 The cytoplasm is a small gel-like substance residing between the cell membrane holding all the cell's internal sub-structures (called organelles), except for the nucleus. All the contents of the cells of prokaryote organisms (which lack a cell nucleus) are contained within the cytoplasm. Within the cells of eukaryote organisms the contents of the cell nucleus are separated from the cytoplasm, and are then called the nucleoplasm.

It is within the cytoplasm that most cellular activities occur, such as many metabolic pathways including glycolysis, and processes such as cell division. The inner, granular mass is called the endoplasm and the outer, clear and glassy layer is called the cell cortex or the ectoplasm.

The part of the cytoplasm that is not held within organelles is called the cytosol. The cytosol is a complex mixture of cytoskeleton filaments, dissolved molecules, and water that fills much of the volume of a cell. The cytosol is a gel, with a network of fibers dispersed through water. Due to this network of pores and high concentrations of dissolved macromolecules, such as proteins, an effect called macromolecular crowding occurs and the cytosol does not act as an ideal solution. This crowding effect alters how the components of the cytosol interact with each other.

Movement of calcium ions in and out of the cytoplasm is thought to be a signaling activity for metabolic processes.[1]

The cytoplasm has three major elements; the cytosol, organelles and inclusions.

The cytosol is the portion not within membrane-bound organelles. The cytosol is a translucent fluid in which the plasmic elements are suspended. Cytosol makes up about 70% of the cell volume and is composed of water, salts and organic molecules.[2] The cytoplasm also contains the protein filaments that make up the cytoskeleton, as well as soluble proteins and small structures such as ribosomes, proteasomes, and the mysterious vault complexes.[3] The inner, granular and more fluid portion of the cytoplasm is referred to as endoplasm. 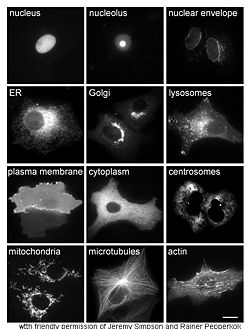 Organelles are membrane-bound "organs" inside the cell that have specific functions. Some major organelles that are suspended in the cytosol are the mitochondria, the endoplasmic reticulum, the Golgi apparatus, vacuoles, lysosomes,and in plant cells chloroplasts.

The inclusions are small particles of insoluble substances suspended in the cytosol. A huge range of inclusions exist in different cell types, and range from crystals of calcium oxalate or silicon dioxide in plants,[4][5] to granules of energy-storage materials such as starch,[6] glycogen,[7] or polyhydroxybutyrate.[8] A particularly widespread example are lipid droplets, which are spherical droplets composed of lipids and proteins that are used in both prokaryotes and eukaryotes as a way of storing lipids such as fatty acids and sterols.[9] Lipid droplets make up much of the volume of adipocytes, which are specialized lipid-storage cells, but they are also found in a range of other cell types.