Immunity is a biological term that describes a state of having sufficient biological defenses to avoid infection, disease, or other unwanted biological invasion. Immunity involves both specific and non-specific components. The non-specific components act either as barriers or as eliminators of wide range of pathogens irrespective of antigenic specificity. Other components of the immune system adapt themselves to each new disease encountered and are able to generate pathogen-specific immunity.

Innate immunity, or nonspecific, immunity is the natural resistance with which a person is born. It provides resistance through several physical, chemical, and cellular approaches. Microbes first encounter the epithelial layers, physical barriers that line our skin and mucous membranes. Subsequent general defenses include secreted chemical signals (cytokines), antimicrobial substances, fever, and phagocytic activity associated with the inflammatory response. The phagocytes express cell surface receptors that can bind and respond to common molecular patterns expressed on the surface of invading microbes. Through these approaches, innate immunity can prevent the colonization, entry, and spread of microbes.

History of theories of immunity 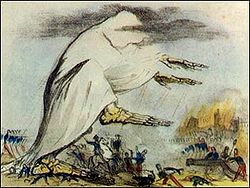 A representation of the cholera epidemic of the nineteenth century.

The concept of immunity has intrigued mankind for thousands of years. The prehistoric view of disease was that it was caused by supernatural forces, and that illness was a form of theurgic punishment for “bad deeds” or “evil thoughts” visited upon the soul by the gods or by one’s enemies.[1] Between the time of Hippocrates and the 19th century, when the foundations of the scientific method were laid, diseases were attributed to an alteration or imbalance in one of the four humors (blood, phlegm, yellow bile or black bile).[2] Also popular during this time was the miasma theory, which held that diseases such as cholera or the Black Plague were caused by a miasma, a noxious form of "bad air".[1] If someone were exposed to the miasma, they could get the disease.

The modern word “immunity” derives from the Latin immunis, meaning exemption from military service, tax payments or other public services.[3] The first written descriptions of the concept of immunity may have been made by the Athenian Thucydides who, in 430 BC, described that when the plague hit Athens “the sick and the dying were tended by the pitying care of those who had recovered, because they knew the course of the disease and were themselves free from apprehensions. For no one was ever attacked a second time, or not with a fatal result”.[3] The term “immunes”, is also found in the epic poem “Pharsalia” written around 60 B.C. by the poet Marcus Annaeus Lucanus to describe a North African tribe’s resistance to snake venom.[2]

The first clinical description of immunity which arose from a specific disease causing organism is probably Kitab fi al-jadari wa-al-hasbah (A Treatise on Smallpox and Measles, translated 1848[4]) written by the Islamic physician Al-Razi in the 9th century. In the treatise, Al Razi describes the clinical presentation of smallpox and measles and goes on to indicate that that exposure to these specific agents confers lasting immunity (although he does not use this term).[2] However, it was with Louis Pasteur’s Germ theory of disease that the fledgling science of immunology began to explain how bacteria caused disease, and how, following infection, the human body gained the ability to resist further infections.[3] 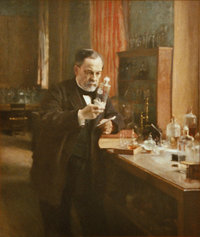 Louis Pasteur in his laboratory, 1885.

The birth of active immunotherapy may have begun with Mithridates VI of Pontus.[5] To induce active immunity for snake venom, he recommended using a method similar to modern toxoid serum therapy, by drinking the blood of animals which fed on venomous snakes.[5] According to Jean de Maleissye, Mithridates assumed that animals feeding on venomous snakes acquired some detoxifying property in their bodies, and their blood must contain attenuated or transformed components of the snake venom. The action of those components might be strengthening the body to resist against the venom instead of exerting toxic effect. Mithridates reasoned that, by drinking the blood of these animals, he could acquire the similar resistance to the snake venom as the animals feeding on the snakes.[5] Similarly, he sought to harden himself against poison, and took daily sub-lethal doses to build tolerance. Mithridates is also said to have fashioned a 'universal antidote' to protect him from all earthly poisons.[2] For nearly 2000 years, poisons were thought to be the proximate cause of disease, and a complicated mixture of ingredients, called Mithridate, was used to cure poisoning during the Renaissance.[2] An updated version of this cure, Theriacum Andromachi, was used well into the 19th century.[6] In 1888 Emile Roux and Alexandre Yersin isolated diphtheria toxin, and following the 1890 discovery by Behring and Kitasato of antitoxin based immunity to diphtheria and tetanus, the antitoxin became the first major success of modern therapeutic Immunology.[2]

In Europe, the induction of active immunity emerged in an attempt to contain smallpox. Immunization, however, had existed in various forms for at least a thousand years.[3] The earliest use of immunization is unknown, however, around 1000 A.D. the Chinese began practicing a form of immunization by drying and inhaling powders derived from the crusts of smallpox lesions.[3] Around the fifteenth century in India, the Ottoman Empire, and east Africa, the practice of variolation (poking the skin with powdered material derived from smallpox crusts) became quite common.[3] Variolation was introduced to the west in the early 18th century by Lady Mary Wortley Montagu.[3] In 1796, Edward Jenner introduced the far safer method of inoculation with the cowpox virus, a non-fatal virus that also induced immunity to smallpox. The success and general acceptance of Jenner's procedure would later drive the general nature of vaccination developed by Pasteur and others towards the end of the 19th century.[2]

Passive immunity is the transfer of active immunity, in the form of readymade antibodies, from one individual to another. Passive immunity can occur naturally, when maternal antibodies are transferred to the fetus through the placenta, and can also be induced artificially, when high levels of human (or horse) antibodies specific for a pathogen or toxin are transferred to non-immune individuals. Passive immunization is used when there is a high risk of infection and insufficient time for the body to develop its own immune response, or to reduce the symptoms of ongoing or immunosuppressive diseases.[7] Passive immunity provides immediate protection, but the body does not develop memory, therefore the patient is at risk of being infected by the same pathogen later.[8]

Maternal passive immunity is a type of naturally acquired passive immunity, and refers to antibody-mediated immunity conveyed to a fetus by its mother during pregnancy. Maternal antibodies (MatAb) are passed through the placenta to the fetus by an FcRn receptor on placental cells. This occurs around the third month of gestation.[9] IgG is the only antibody isotype that can pass through the placenta.[9] Passive immunity is also provided through the transfer of IgA antibodies found in breast milk that are transferred to the gut of the infant, protecting against bacterial infections, until the newborn can synthesize its own antibodies.[8]

One of the first bottles of diphtheria antitoxin produced (Dated 1895).

Artificially acquired passive immunity is a short-term immunization induced by the transfer of antibodies, which can be administered in several forms; as human or animal blood plasma, as pooled human immunoglobulin for intravenous (IVIG) or intramuscular (IG) use, and in the form of monoclonal antibodies (MAb). Passive transfer is used prophylactically in the case of immunodeficiency diseases, such as hypogammaglobulinemia.[10] It is also used in the treatment of several types of acute infection, and to treat poisoning.[7] Immunity derived from passive immunization lasts for only a short period of time, and there is also a potential risk for hypersensitivity reactions, and serum sickness, especially from gamma globulin of non-human origin.[8]

The artificial induction of passive immunity has been used for over a century to treat infectious disease, and prior to the advent of antibiotics, was often the only specific treatment for certain infections. Immunoglobulin therapy continued to be a first line therapy in the treatment of severe respiratory diseases until the 1930’s, even after sulfonamide lot antibiotics were introduced.[10]

Passive or "adoptive transfer" of cell-mediated immunity, is conferred by the transfer of "sensitized" or activated T-cells from one individual into another. It is rarely used in humans because it requires histocompatible (matched) donors, which are often difficult to find. In unmatched donors this type of transfer carries severe risks of graft versus host disease.[7] It has, however, been used to treat certain diseases including some types of cancer and immunodeficiency. This type of transfer differs from a bone marrow transplant, in which (undifferentiated) hematopoietic stem cells are transferred. 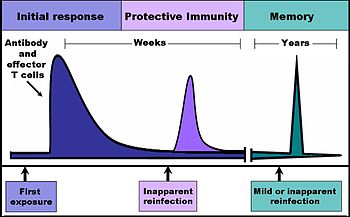 The time course of an immune response. Due to the formation of immunological memory, reinfection at later time points leads to a rapid increase in antibody production and effector T cell activity. These later infections can be mild or even inapparent.

When B cells and T cells are activated by a pathogen, memory B-cells and T- cells develop. Throughout the lifetime of an animal these memory cells will “remember” each specific pathogen encountered, and are able to mount a strong response if the pathogen is detected again. This type of immunity is both active and adaptive because the body's immune system prepares itself for future challenges. Active immunity often involves both the cell-mediated and humoral aspects of immunity as well as input from the innate immune system. The innate system is present from birth and protects an individual from pathogens regardless of experiences, whereas adaptive immunity arises only after an infection or immunization and hence is "acquired" during life.

For more details on this topic, see Immune system.

Naturally acquired active immunity occurs when a person is exposed to a live pathogen, and develops a primary immune response, which leads to immunological memory.[7] This type of immunity is “natural” because it is not induced by deliberate exposure. Many disorders of immune system function can affect the formation of active immunity such as immunodeficiency (both acquired and congenital forms) and immunosuppression.

Artificially acquired active immunity can be induced by a vaccine, a substance that contains antigen. A vaccine stimulates a primary response against the antigen without causing symptoms of the disease.[7] The term vaccination was coined by Edward Jenner and adapted by Louis Pasteur for his pioneering work in vaccination. The method Pasteur used entailed treating the infectious agents for those diseases so they lost the ability to cause serious disease. Pasteur adopted the name vaccine as a generic term in honor of Jenner's discovery, which Pasteur's work built upon. 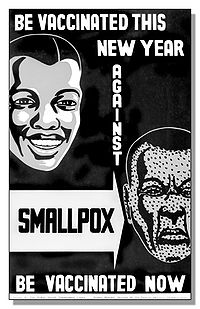 Poster from before the 1979 eradication of smallpox, promoting vaccination.

In 1807, the Bavarians became the first group to require that their military recruits be vaccinated against smallpox, as the spread of smallpox was linked to combat.[11] Subsequently the practice of vaccination would increase with the spread of war.

There are four types of traditional vaccines:[12]