Immune tolerance in pregnancy or gestational/maternal immune tolerance is the absence of a maternal immune response against the fetus and placenta, which thus may be viewed as unusually successful allografts, since they genetically differ from the mother.[1] In the same way, many cases of spontaneous abortion may be described in the same way as maternal transplant rejection.[1] It is studied within the field of reproductive immunology. 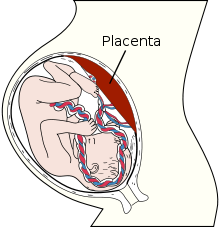 The placenta functions as an immunological barrier between the mother and the fetus.

The placenta functions as an immunological barrier between the mother and the fetus, creating an immunologically privileged site. For this purpose, it uses several mechanisms:

In any case, the placenta does not block maternal IgG antibodies, which thereby may pass through the human placenta, providing immune protection to the fetus against infectious diseases.

One model for the induction of tolerance during the very early stages of pregnancy is the Eutherian Fetoembryonic Defense System (eu-FEDS) hypothesis.[9] The basic premise of the eu-FEDS hypothesis is that both soluble and cell surface associated glycoproteins, present in the reproductive system and expressed on gametes, suppress any potential immune responses, and inhibit rejection of the fetus.[9] The eu-FEDS model further suggests that specific carbohydrate sequences (oligosaccharides) are covalently linked to these immunosuppressive glycoproteins and act as “functional groups” that suppress the immune response. The major uterine and fetal glycoproteins that are associated with the eu-FEDS model in the human include alpha-fetoprotein, CA125, and glycodelin-A (also known as placental protein 14 (PP14)).

Also, a shift from cell-mediated immunity toward humoral immunity is believed to occur.[11]

Many cases of spontaneous abortion may be described in the same way as maternal transplant rejection,[1] and a chronic insufficient tolerance may cause infertility. Other examples of insufficient immune tolerance in pregnancy are Rh disease and pre-eclampsia:

Pregnancies resulting from egg donation, where the carrier is less genetically similar to the fetus than a biological mother, are associated with a higher incidence of pregnancy-induced hypertension and placental pathology.[14] The local and systemic immunologic changes are also more pronounced than in normal pregnancies, so it has been suggested that the higher frequency of some conditions in egg donation may be caused by reduced immune tolerance from the mother.[14]

Antinuclear antibodies cause an inflammation in the uterus that does not allow it to be a suitable host for implantation of the embryo. Natural killer cells misinterpret the fetal cells as cancer cells and attack them. An individual that presents with reproductive autoimmune failure syndrome has unexplained infertility, endometriosis, and repetitive miscarriages due to elevated levels of antinuclear antibodies circulating.[15] Both the presence of anti-phospholipids antibodies and antinuclear antibodies have toxic effects on the implantation of embryos. This does not apply to anti-thyroid antibodies. Elevated levels do not have a toxic effect, but they are indicative of a risk of miscarriage. Elevated anti-thyroid antibodies act as a marker for females who have T-lymphocyte dysfunction because these levels indicate T cells that are secreting high levels of cytokines that induce inflammation in the uterine wall.[15]

Still, there is currently no drug that has evidence of preventing miscarriage by inhibition of maternal immune responses; aspirin has no effect in this case.[16]

If the mechanisms of rejection-immunity of the fetus could be elucidated, it could avail for interspecific pregnancy, having, for example pigs carry human fetuses to term as an alternative to a human surrogate mother, providing a sober, drug-free and nonsmoking carrier. [17] However, this is unlikely to occur given the ethical issues concerning interspecies pregnancies and the viability of the human fetus in a pig.