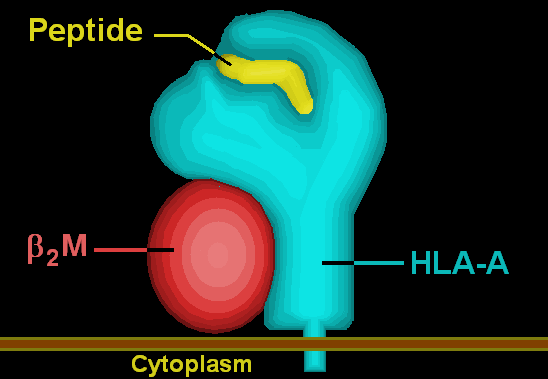 HLA-A are a group of s (HLA) that are by the HLA-A locus on human chromosome 6p. The HLA genes constitute the major histocompatibility gene complex (MHC) of human. HLA-A is a component of certain isoforms that resides on most cells of the body. The receptor is a , and is composed of a heavy, α chain, and smaller, β chain. The alpha chain is encoded by a variant HLA-A gene and the beta chain (β2-microglobulin) is compose by the invariant gene.

MHC Class I molecules are part of a process that presents polypeptides from host of foreign derivation to the immune system. Normally if a peptide of foreign, pathogenic, source is detected it alerts the immune system that the cell may be infected with a virus, and thus target the cell for destruction.

For humans, as in most mammalian populations, MHC Class I molecules are extremely variable in their , and HLA-A is ranked among the genes in humans with the fastest evolving coding sequence. After typing millions of individuals 100s of variant s and isoforms have been identified.

The HLA-A gene is part of the Human MHC complex on chromosome 6. The region is at the telomeric end of the HLA complex between the and genes. HLA-A gene encodes the larger, α-chain, constituent of HLA-A. Variation of HLA-A α-chain in certain ways is key to HLA function. This variation promotes diversity of class I recognition in the individual and also promotes genetic diversity in the population. This diversity allows more types of foreign, virus or cancer, antigens to be 'presented' on the cell surface, but also allows a subset of the population to survive if a new virus spreads rapidly through the population.

These changes are also key to inter-individual "histo"compatibility of organs and tissues. Difference in exposed structures of homologous proteins between individuals gives rise to antigen-antibody reactions when tissues are transplanted. This form of "antigenicity" gives rise to serotypes in tissue recipients. Refined serotypes are what scientist have used for grouping HLA.

There are a large number of alleles, so that classification by serotype simplifies catagorization.For example HLA-AHAwA|0101, HAwA|0102, HAwA|0103, . . . HAwA|0130 are assigned to the serotype A1.

There are 673 gene alleles capable of producing 527 HLA-A isoforms and 46 nulls.

HLA alleles and specificity are assigned as consequence of workshops and working groups. Some Allele groups have been updated with recent information from the [http://www.ebi.ac.uk/imgt/hla/allele.html IMGT/HLA Database]

MHC Class I molecules present smaller peptides, generally 9 amino acids in length, but somewhat longer molecules are tolerated, to the immune system. Several target cells include CD8+ T-lymphocytes. In response to signalling these lymphocytes result in programmed cell death (apoptosis). This mechanism is the result of responses to viral infection or intracellular microbial infections in which, as a means of preventing propagation, affected cells are killed and the antigens are presented to the immune system for Class II presentation and antibody development. Over a short period of time antibodies develop that can neutralize the ability of viruses and invasive bacteria to invade cells.

One major activity of HLA-A receptors resulted from the era of organ transplantation initiated after WWII. By the 1960s it became evident that factors on the donated organs and tissues resulted in an inflammatory destruction of those transplants by the host. The MHC class I receptors were a primary target on donor tissues. As a consequence donated organs need to be matched with regard to HLA between donor and recipient.

HLA often suffer a peculiar problem in genetics, many of the haplotypes associated with disease are very large, often millions of nucleotides. Therefore associations with disease often mark a variable gene that is close to a susceptibility gene for a disease. Most of the susceptibility for inflammatory disease lie between HLA-B locus and HLA-DP locus with a substantial fraction linked to DR-DQ haplotypes. There are a few diseases however that link to the region telomeric from HLA-B which contains most of the Class I loci, HLA-F, HLA-G, and HLA-E as well as other genes.