Macrophages (Greek: big eaters, from makros "large" + phagein "eat"; abbr. MΦ) are cells produced by the differentiation of monocytes in tissues. Human macrophages are about 21 micrometres (0.00083 in) in diameter.[1] Monocytes and macrophages are phagocytes. Macrophages function in both non-specific defense (innate immunity) as well as help initiate specific defense mechanisms (adaptive immunity) of vertebrate animals. Their role is to phagocytose (engulf and then digest) cellular debris and pathogens, either as stationary or as mobile cells. They also stimulate lymphocytes and other immune cells to respond to pathogens. They are specialized phagocytic cells that attack foreign substances, infectious microbes and cancer cells through destruction and ingestion. Macrophages can be identified by specific expression of a number of proteins including CD14, CD11b, F4/80 (mice)/EMR1 (human), lysozyme M, MAC-1/MAC-3 and CD68 by flow cytometry or immunohistochemical staining.[2] They move by action of amoeboid movement.

When a leukocyte enters damaged tissue through the endothelium of a blood vessel (a process known as the leukocyte extravasation), it undergoes a series of changes to become a macrophage. Monocytes are attracted to a damaged site by chemical substances through chemotaxis, triggered by a range of stimuli including damaged cells, pathogens and cytokines released by macrophages already at the site. At some sites such as the testis, macrophages have been shown to populate the organ through proliferation. Unlike short-lived neutrophils, macrophages survive longer in the body up to a maximum of several months. 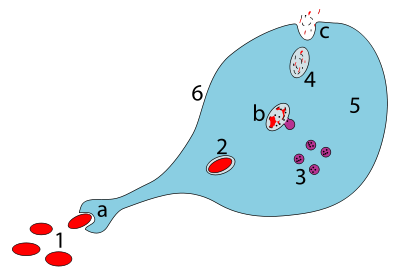 Steps of a macrophage ingesting a pathogen:
a. Ingestion through phagocytosis, a phagosome is formed
b. The fusion of lysosomes with the phagosome creates a phagolysosome; the pathogen is broken down by enzymes
c. Waste material is expelled or assimilated (the latter not pictured)
Parts:
1. Pathogens
2. Phagosome
3. Lysosomes
4. Waste material
5. Cytoplasm
6. Cell membrane

One important role of the macrophage is the removal of necrotic cellular debris in the lungs. Removing dead cell material is important in chronic inflammation, as the early stages of inflammation are dominated by neutrophil granulocytes, which are ingested by macrophages if they come of age (see CD-31 for a description of this process.)

The removal of necrotic tissue is, to a greater extent, handled by fixed macrophages, which will stay at strategic locations such as the lungs, liver, neural tissue, bone, spleen and connective tissue, ingesting foreign materials such as pathogens and recruiting additional macrophages if needed.

When a macrophage ingests a pathogen, the pathogen becomes trapped in a phagosome, which then fuses with a lysosome. Within the phagolysosome, enzymes and toxic peroxides digest the pathogen. However, some bacteria, such as Mycobacterium tuberculosis, have become resistant to these methods of digestion. Macrophages can digest more than 100 bacteria before they finally die due to their own digestive compounds.

Macrophages are versatile cells that play many roles. As scavengers, they rid the body of worn-out cells and other debris. Along with dendritic cells, they are foremost among the cells that "present" antigen, a crucial role in initiating an immune response. As secretory cells, monocytes and macrophages are vital to the regulation of immune responses and the development of inflammation; they produce a wide array of powerful chemical substances (monokines) including enzymes, complement proteins, and regulatory factors such as interleukin-1. At the same time, they carry receptors for lymphokines that allow them to be "activated" into single-minded pursuit of microbes and tumour cells.

After digesting a pathogen, a macrophage will present the antigen (a molecule, most often a protein found on the surface of the pathogen, used by the immune system for identification) of the pathogen to the corresponding helper T cell. The presentation is done by integrating it into the cell membrane and displaying it attached to an MHC class II molecule, indicating to other white blood cells that the macrophage is not a pathogen, despite having antigens on its surface.

Eventually, the antigen presentation results in the production of antibodies that attach to the antigens of pathogens, making them easier for macrophages to adhere to with their cell membrane and phagocytose. In some cases, pathogens are very resistant to adhesion by the macrophages.

The antigen presentation on the surface of infected macrophages (in the context of MHC class II) in a lymph node stimulates TH1 (type 1 helper T cells) to proliferate (mainly due to IL-12 secretion from the macrophage). When a B-cell in the lymph node recognizes the same unprocessed surface antigen on the bacterium with its surface bound antibody, the antigen is endocytosed and processed. The processed antigen is then presented in MHCII on the surface of the B-cell. T cells that express the T cell receptor which recognizes the antigen-MHCII complex (with co-stimulatory factors- CD40 and CD40L) cause the B-cell to produce antibodies that help opsonisation of the antigen so that the bacteria can be better cleared by phagocytes.

Macrophages provide yet another line of defense against tumor cells and somatic cells infected with fungus or parasites. Once a T cell has recognized its particular antigen on the surface of an aberrant cell, the T cell becomes an activated effector cell, producing chemical mediators known as lymphokines that stimulate macrophages into a more aggressive form.

Currently, it is a major opinion that there are several activated forms of macrophages.[3] In spite of a spectrum of ways to activate macrophages, historically they have been classfied into two main groups designated M1 and M2. M1 macrophages are immune effector cells that are aggressive against microbes and can engulf and digest affected cells much more readily, and they also produce many lymphokines.[4] As more ways to activate macrophages become apparent, the M2 designation is becoming a catch-all to describe other types, including those that function in wound healing and tissue repair, and those that turn off immune system activation by producing anti-inflammatory cytokines like IL-10.

The first step to understanding the importance of macrophages in muscle repair, growth, and regeneration is that there are two “waves” of macrophages with the onset of damageable muscle use – subpopulations that do and do not directly have an influence on repairing muscle. The initial wave is a phagocytic population that comes along during periods of increased muscle use that are sufficient to cause muscle membrane lysis and membrane inflammation, which can enter and degrade the contents of injured muscle fibers.[5][6][7] These early-invading, phagocytic macrophages reach their highest concentration about 24 hours following the onset of some form of muscle cell injury or reloading.[8] Their concentration rapidly declines after 48 hours.[6] The second group is the non-phagocytic types that are distributed near regenerative fibers. These peak between two and four days and remain elevated for several days during the hopeful muscle rebuilding.[6] The first subpopulation has no direct benefit to repairing muscle, while the second non-phagocytic group does.

It is thought that macrophages release soluble substances that influence the proliferation, differentiation, growth, repair, and regeneration of muscle, but at this time the factor that is produced to mediate these effects is unknown.[8] It is known that macrophages' involvement in promoting tissue repair is not muscle specific; they accumulate in numerous tissues during the healing process phase following injury.[9]

A study conducted in 2006 showcased macrophage influences on muscle repair of soleus muscle on mice.[10]

The first procedural step was to make sure macrophages are present in the muscle after onset of muscle injury, and then decrease their presence to see what effects were had on the muscle. By using anti-F4/80 to bind to macrophages and render them useless, it was seen that when the second wave of macrophages were depleted, there were many more lesions in the muscle cell membrane between the second and fourth day – showing muscle damage when repairing is supposed to occur. After testing for membrane lesions in both the total amount of muscle fibers present, it was noticed that most of the damage occurred in muscle cells that did not have the second subpopulation of macrophages present. Macrophages depletion prevents muscle membrane repair.

The study attempted to examine the appearances of Pax7 and MyoD, but data was not consistent with previous findings.

A majority of macrophages are stationed at strategic points where microbial invasion or accumulation of dust is likely to occur. Each type of macrophage, determined by its location, has a specific name:

Investigations concerning Kupffer cells are hampered because in humans Kupffer cells are only accessible for immunohistochemical analysis from biopsies or autopsies. From rats and mice they are difficult to isolate and after purification only approximately 5 million cells can be obtained from one mouse.

Macrophages can express paracrine functions within organs that are specific to the function of that organ. In the testis for example, macrophages have been shown to be able to interact with Leydig cells by secreting 25-hydroxycholesterol, an oxysterol that can be converted to testosterone by neighbouring Leydig cells.[11] Also, testicular macrophages may participate in creating an immune privileged environment in the testis, and in mediating infertility during inflammation of the testis.

Due to their role in phagocytosis, macrophages are involved in many diseases of the immune system. For example, they participate in the formation of granulomas, inflammatory lesions that may be caused by a large number of diseases. Some disorders, mostly rare, of ineffective phagocytosis and macrophage function have been described, for example.[citation needed]

Once engulfed by a macrophage the causititve agent of tuberculosis, Mycobacterium tuberculosis [12] avoids cellular defenses and uses the cell to replicate.

Macrophages are the predominant cells involved in creating the progressive plaque lesions of atherosclerosis.[13]

Macrophages also play a role in Human Immunodeficiency Virus (HIV) infection. Like T cells, macrophages can be infected with HIV, and even become a reservoir of ongoing virus replication throughout the body. HIV can enter the macrophage through binding of gp120 to CD4 and second membrane receptor, CCR5 (a chemokine receptor). Both circulating monocytes and macrophages serve as a reservoir for the virus.[14]

Macrophages are believed to help cancer cells proliferate as well. They are attracted to oxygen-starved (hypoxic) tumour cells and promote chronic inflammation. Inflammatory compounds such as Tumor necrosis factor (TNF) released by the macrophage activates the gene switch nuclear factor-kappa B. NF-κB then enters the nucleus of a tumour cell and turns on production of proteins that stop apoptosis and promote cell proliferation and inflammation.[15]