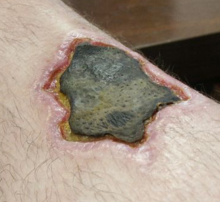 Necrosis (from the Greek νεκρός, "dead", νέκρωσις, "death, the stage of dying, the act of killing") is the premature death of cells and living tissue. Necrosis is caused by factors external to the cell or tissue, such as infection, toxins, or trauma. This is in contrast to apoptosis, which is a naturally occurring cause of cellular death. While apoptosis often provides beneficial effects to the organism, necrosis is almost always detrimental and can be fatal.

Cells that die due to necrosis do not usually send the same chemical signals to the immune system that cells undergoing apoptosis do. This prevents nearby phagocytes from locating and engulfing the dead cells, leading to a build-up of dead tissue and cell debris at or near the site of the cell death. For this reason, it is often necessary to remove necrotic tissue surgically, a process known as debridement.

There are seven distinctive morphologic patterns of necrosis:

In the United States, only spider bites from the brown recluse spider (genus Loxosceles) have been proven to cause necrosis.[1] Other spiders of the same genus, such as the Chilean recluse in South America, have similarly been shown to cause necrosis in other countries.[2][3] While both the yellow sac spiders and Hobo spider are often claimed to possess necrotic venom,[4][5] these claims have been challenged.[6][1][7][8]

A few other spiders commonly suspected (but not all conclusively proven) of having necrotic venom include: 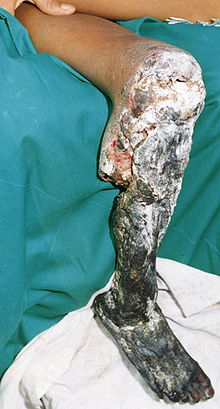 Example of severe tissue necrosis seen on an 11-year old boy following a bite from the Bothrops asper snake. Amputation above the knee would have been the only viable treatment

Cellular necrosis can be induced by a number of external sources, including injury, infection, cancer, infarction, poisons, ROS (Reactive Oxygen Species), and inflammation. For example, an infarction (blockage of blood flow to muscular tissue) causes necrosis of muscle tissue due to lack of oxygen to the affected cell, such as occurs in a myocardial infarction -- a heart attack. Certain spider (brown recluse) and snake (rattlesnake, Bothrops) venoms can cause necrosis of the tissue near the bite wound, as can a Group A streptococcus infection (one of the "flesh-eating" bacteria).[citation needed]

Necrotic tissue does not undergo the same chemical reactions that normally dying apoptotic tissue does. The sudden failure of one part of the cell triggers a cascade of events. In addition to the lack of chemical signals to the immune system, cells undergoing necrosis can release harmful chemicals into the surrounding tissue. In particular, cells contain small organelles called lysosomes, which are capable of digesting cellular material. Damage to the lysosome membrane can trigger release of the contained enzymes, destroying other parts of the cell. Worse, when these enzymes are released from the non-dead cell, they can trigger a chain reaction of further cell death. If a sufficient amount of contiguous tissue necrotizes, it is termed gangrene. Proper care and treatment of wounds or animal bites plays a key role in preventing this type of widespread necrosis. During a surgical biopsy, this necrosis chain-reaction is halted by fixation or freezing.[citation needed]

Necrosis typically begins with cell swelling, chromatin digestion, and disruption of the plasma membrane and organelle membranes. Late necrosis is characterized by extensive DNA hydrolysis, vacuolation of the endoplasmic reticulum, organelle breakdown, and cell lysis. The release of intracellular content after plasma membrane rupture is the cause of inflammation in necrosis.[citation needed]

Treatment of necrosis typically involves two distinct processes. Usually, the underlying cause of the necrosis must be treated before the dead tissue itself can be dealt with. For example, a snake or spider bite victim will receive anti-venom to halt the spread of the toxins, while an infected patient will receive antibiotics.

Even after the initial cause of the necrosis has been halted, the necrotic tissue will remain in the body. The body's immune response to apoptosis, the automatic breaking down and recycling of the cell material, is not triggered by necrotic cell death.

The standard therapy of necrosis (wounds, bedsores, burns, etc.) is surgical removal of necrotic tissue. Depending on the severity of the necrosis, this may range from removal of small patches of skin, to complete amputation of affected limbs or organs. Chemical removal, via an enzymatic debriding agent, is another option. In select cases, special maggot therapy has been utilized with good results.

If calcium is deficient, pectin cannot be synthesized, and therefore the cell walls cannot be bonded and thus an impediment of the meristems. This will lead to necrosis of stem and root tips and leaf edges.[9]