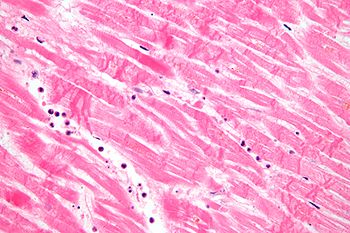 Histopathology (compound of three Greek words: ἱστός histos "tissue", πάθος pathos "disease-suffering", and -λογία -logia) refers to the microscopic examination of tissue in order to study the manifestations of disease. Specifically, in clinical medicine, histopathology refers to the examination of a biopsy or surgical specimen by a pathologist, after the specimen has been processed and histological sections have been placed onto glass slides. In contrast, cytopathology examines free cells or tissue fragments.

Histopathological examination of tissues starts with surgery, biopsy, or autopsy. The tissue is removed from the body or plant, and then placed in a fixative which stabilizes the tissues to prevent decay. The most common fixative is formalin (10% formaldehyde in water).

The tissue is then prepared for viewing under a microscope using either chemical fixation or frozen section.

In chemical fixation, the samples are transferred to a cassette, a container designed to allow reagents to freely act on the tissue inside. This cassette is immersed in multiple baths of progressively more concentrated ethanol, to dehydrate the tissue, followed by toluene or xylene, and finally extremely hot liquid (usually paraffin). During this 12 to 16 hour process, paraffin will replace the water in the tissue, turning soft, moist tissues into a sample miscible with paraffin, a type of wax. This process is known as tissue processing.

The processed tissue is then taken out of the cassette and set in a mold. Through this process of embedding, additional paraffin is added to create a paraffin block which is attached to the outside of the cassette.

The process of embedding then allows the sectioning of tissues into very thin (2 - 7 micrometer) sections using a microtome. The microtome slices the tissue ready for microscopic examination. The slices are thinner than the average cell, and are layered on a glass slide for staining.

The second method of histology processing is called frozen section processing. In this method, the tissue is frozen and sliced thinly using a microtome mounted in a below-freezing refrigeration device called the cryostat. The thin frozen sections are mounted on a glass slide, fixed immediately & briefly in liquid fixative, and stained using the similar staining techniques as traditional wax embedded sections. The advantages of this method is rapid processing time, less equipment requirement, and less need for ventilation in the laboratory. The disadvantage is the poor quality of the final slide. It is used in intra-operative pathology for determinations that might help in choosing the next step in surgery during that surgical session (for example, to preliminarily determine clearness of the resection margin of a tumor during surgery).

Staining of the Processed Histology Slides

This can be done to slides processed by the chemical fixation or frozen section slides. To see the tissue under a microscope, the sections are stained with one or more pigments. The aim of staining is to reveal cellular components; counterstains are used to provide contrast.

The most commonly used stain in histopathology is a combination of hematoxylin and eosin (often abbreviated H&E). Hematoxylin is used to stain nuclei blue, while eosin stains cytoplasm and the extracellular connective tissue matrix pink. There are hundreds of various other techniques which have been used to selectively stain cells. Other compounds used to color tissue sections include safranin, Oil Red O, congo red, silver salts and artificial dyes. Histochemistry refers to the science of using chemical reactions between laboratory chemicals and components within tissue. A commonly performed histochemical technique is the Perls Prussian Blue reaction, used to demonstrate iron deposits in diseases like Hemochromatosis. [1]

Recently, antibodies have been used to stain particular proteins, lipids and carbohydrates. Called immunohistochemistry, this technique has greatly increased the ability to specifically identify categories of cells under a microscope. Other advanced techniques include in situ hybridization to identify specific DNA or RNA molecules. These antibody staining methods often require the use of frozen section histology. Digital cameras are increasingly used to capture histopathological images.

The histological slides are examined under a microscope by a pathologist, a medically qualified specialist who has completeted a recognised training programme (5 - 5.5 years in the United Kingdom). This medical diagnosis is formulated as a pathology report describing the histological findings and the opinion of the pathologist. In the case of cancer, this represents the tissue diagnosis required for most treatment protocols. In the removal of cancer, the pathologist will indicate whether the surgical margin is cleared, or is involved (residual cancer is left behind). This is done using either the bread loafing or CCPDMA method of processing.

After a myocardial infarction, no histopathology is seen the first ~30 minutes. The only possible sign the first 4 hours is waviness of fibres at border. Later, however, a coagulation necrosis is initiated, with edema and hemorrhage. After 12 hours, there can be seen karyopyknosis and hypereosinophilia of myocytes with contraction band necrosis in margins, as well as beginning of neutrophil infiltration. At 1 – 3 days there is continued coagulation necrosis with loss of nuclei and striations and an increased infiltration of neutrophils to interstitium. Until the end of the first week after infarction there is beginning of disintegration of dead muscle fibres, necrosis of neutrophils and beginning of macrophage removal of dead cells at border, which increases the succeeding days. After a week there is also beginning of granulation tissue formation at margins, which matures during the following month, and gets increased collagen deposition and decreased cellularity until the myocardial scarring is fully mature at approximately 2 months after infarction.[2]