Necrotizing fasciitis is a quickly progressing and severe disease of sudden onset and is usually treated immediately with high doses of intravenous antibiotics.

Historically, Group A streptococcus made up most cases of Type II infections. However, since as early as 2001, another serious form of monomicrobial necrotizing fasciitis has been observed with increasing frequency.[3] In these cases, the bacterium causing it is methicillin-resistant Staphylococcus aureus (MRSA), a strain of S. aureus that is resistant to methicillin, the antibiotic used in the laboratory that determines the bacterium's sensitivity to flucloxacillin or nafcillin that would be used for treatment clinically.

Several studies[4] have demonstrated a link between absorption of non-steroidal anti-inflammatory drugs and flesh-eating disease, though it has not been established whether the drugs just masked the symptoms or were a cause per se.

Over 70% of cases are recorded in patients with one of the following clinical situations: immunosuppression, diabetes, alcoholism/drug abuse, malignancies, and chronic systemic diseases. It occasionally occurs in people with an apparently normal general condition.[5]

The infection begins locally at a site of trauma, which may be severe (such as the result of surgery), minor, or even non-apparent. Patients usually complain of intense pain that may seem excessive given the external appearance of the skin. With progression of the disease, often within hours, tissue becomes swollen. Diarrhea and vomiting are also common symptoms.

In the early stages, signs of inflammation may not be apparent if the bacteria are deep within the tissue. If they are not deep, signs of inflammation, such as redness and swollen or hot skin, develop very quickly. Skin color may progress to violet, and blisters may form, with subsequent necrosis (death) of the subcutaneous tissues.

Patients with necrotizing fasciitis typically have a fever and appear very ill. Mortality rates have been noted as high as 73 percent if left untreated.[6] Without surgery and medical assistance, such as antibiotics, the infection will rapidly progress and will eventually lead to death.[7]

"Flesh-eating bacteria" is a misnomer, as the bacteria do not actually "eat" the tissue. They cause the destruction of skin and muscle by releasing toxins (virulence factors), which include streptococcal pyogenic exotoxins. S. pyogenes produces an exotoxin known as a superantigen. This toxin is capable of activating T-cells non-specifically, which causes the overproduction of cytokines and severe systemic illness (Toxic shock syndrome).

Free air in the soft tissues due to necrotizing fasciitis

The Laboratory Risk Indicator for Necrotizing Fasciitis (LRINEC) score can be utilized to risk stratify patients presenting with signs of cellulitis to determine the likelihood of necrotizing fasciitis being present. It uses six serologic measures: C-reactive protein, total white cell count, hemoglobin, sodium, creatinine and glucose. A score greater than 6 indicates that necrotizing fasciitis should be seriously considered. The scoring criteria are as follows 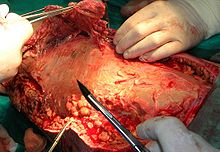 Necrotic tissue from the left leg is being surgically debrided in a patient with necrotizing fasciitis (same patient as above).

Patients are typically taken to surgery based on a high index of suspicion, determined by the patient's signs and symptoms. In necrotizing fasciitis, aggressive surgical debridement (removal of infected tissue) is always necessary to keep it from spreading and is the only treatment available. Diagnosis is confirmed by visual examination of the tissues and by tissue samples sent for microscopic evaluation.

Early medical treatment is often presumptive; thus, antibiotics should be started as soon as this condition is suspected. Initial treatment often includes a combination of intravenous antibiotics including penicillin, vancomycin, and clindamycin. Cultures are taken to determine appropriate antibiotic coverage, and antibiotics may be changed when culture results are obtained.

As in other maladies characterized by massive wounds or tissue destruction, hyperbaric oxygen treatment can be a valuable adjunctive therapy but is not widely available.[10] Amputation of the affected organ(s) may be necessary. Repeat explorations usually need to be done to remove additional necrotic tissue. Typically, this leaves a large open wound, which often requires skin grafting. The associated systemic inflammatory response is usually profound, and most patients will require monitoring in an intensive care unit.