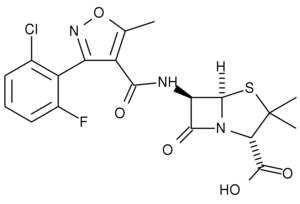 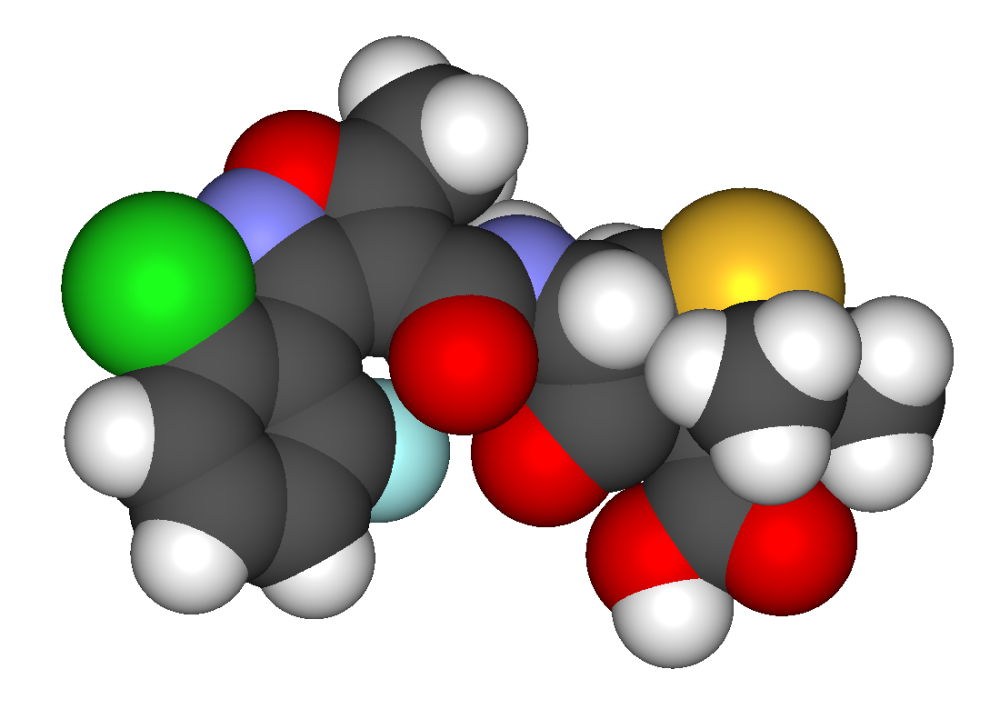 Flucloxacillin (INN) or floxacillin (USAN) is a narrow spectrum of the class. It is used to treat infections caused by susceptible . Nowadays, it is no longer recommended against -producing organisms such as "", since like in other s, it has become not active against such infections. It is very similar to and these two agents are considered interchangeable. Flucloxacillin is also available under a variety of trade names including Flopen (CSL) and Floxapen (GSK).

Like other β-lactam antibiotics, flucloxacillin acts by inhibiting the synthesis of bacterial s. It inhibits cross-linkage between the linear polymer chains that make up a major component of the cell wall of bacteria.

Flucloxacillin is insensitive to (also known as penicillinase) enzymes secreted by many penicillin-resistant bacteria. The presence of the isoxazolyl group on the of the penicillin nucleus facilitates the β-lactamase resistance, since they are relatively intolerant of side-chain . Thus it is able to bind to s (PBPs) and inhibit crosslinking, but is not bound by or inactivated by β-lactamases.

Flucloxacillin is more acid-stable than many other penicillins and can be given orally, in addition to routes. However, like , it is less potent than against non-β-lactamase-producing bacteria.

Flucloxacillin is indicated for the treatment of infections caused by susceptible bacteria. Specific approved indications include:

Flucloxacillin has relatively poor activity, as noted above, against non-β-lactamase-producing bacteria including "". Therefore empirical therapy for significant cellulitis often involves dual-therapy to cover both staphylococci and streptococci, using either or in addition to flucloxacillin. The latter is available as a standardised combination preparation (flucloxacillin+ampicillin).

It should be used with caution in the elderly, patients with renal impairment, where a reduced dose is required; and those with hepatic impairment, due to the risk of cholestatic hepatitis.

Common s (ADRs) associated with the use of flucloxacillin include: , , , , and at injection site, (including ), , and transient increases in liver enzymes and bilirubin.

Rarely, cholestatic jaundice (also referred to as cholestatic hepatitis) has been associated with flucloxacillin therapy. The reaction may occur up to several weeks after treatment has stopped, and takes weeks to resolve. The estimated incidence is 1 in 15,000 exposures, and is more frequent in people >55 years, females, and those with treatment longer than 2 weeks.

Despite flucloxacillin being insensitive to beta-lactamases, some organisms have developed resistance to it and other narrow-spectrum β-lactam antibiotics including methicillin. Such organisms include methicillin-resistant "Staphylococcus aureus" (MRSA).