Staphylococcus
Not to be confused with Streptococcus.

Staphylococcus (from the Greek: σταφυλή, staphylē, "bunch of grapes" and κόκκος, kókkos, "granule") is a genus of Gram-positive bacteria. Under the microscope they appear round (cocci), and form in grape-like clusters.[1]

The Staphylococcus genus includes at least forty species. Of these, nine have two subspecies and one has three subspecies.[2] Most are harmless and reside normally on the skin and mucous membranes of humans and other organisms. Found worldwide, they are a small component of soil microbial flora.[3]

The taxonomy is based on 16s rRNA sequences[4] and most of the staphylococcal species fall into 11 clusters:

A twelfth group - that of S. caseolyticus - has now been moved to a new genus Macrococcus the species of which are currently the closest known relatives of the Staphylococci.[5]

Members of the S. sciuri group are oxidase positive due to their possession of the enzyme cytochrome c oxidase. This group is the only clade within the Staphylococci to possess this gene.

The S. sciuri group appear to be the closest relations to the genus Macrococcus.

Within these clades the S. haemolyticus and S. simulans groups appear to be related as do the S. aureus and S. epidermidis groups.[8]

S. lugdunensis appears to be related to the S. haemolyticus group.

S. croceolyticus may be related to S. haemolyticus but this needs to be confirmed.

The taxonomic position of S. croceolyticus, S. leei, S. lyticans and S. pseudolugdunensis has yet to be clarified. The published descriptions of these species do not appear to have been validly published to date (2010).

Assignment of a strain to the genus Staphylococcus requires that it is a Gram-positive coccus that forms clusters, produces catalase, has an appropriate cell wall structure (including peptidoglycan type and teichoic acid presence) and G + C content of DNA in a range of 30-40 mol%.

Staphylococcus species can be differentiated from other aerobic and facultative anaerobic gram positive cocci by several simple tests. Staphylococcus spp. are facultative anaerobes (capable of growth both aerobically and anaerobically). All species grow in the presence of bile salts and all are catalase positive. Growth can also occur in a 6.5% NaCl solution. On Baird Parker Medium Staphylococcus spp. grow fermentatively, except for S. saprophyticus which grows oxidatively. Staphylococcus spp. are resistant to bacitracin (0.04 U disc: resistance = <10mm zone of inhibition) and susceptible to furazolidone (100μg disc: resistance = <15mm zone of inhibition). Further biochemical testing is needed to identify down to the species level.

One of the most important phenotypical features used in the classification of staphylococci is their ability to produce coagulase, an enzyme that causes blood clot formation.

A seventh species has also been described - Staphylococcus leei - from patients with gastritis.[9]

S. aureus (formerly called Staphylococcus pyogenes[citation needed]) is coagulase-positive, meaning that it produces coagulase. However, while the majority of S. aureus are coagulase-positive, some may be atypical in that they do not produce coagulase. S aureus is catalase-positive (meaning that it can produce the enzyme catalase) and able to convert hydrogen peroxide (H2O2) to water and oxygen, which makes the catalase test useful to distinguish Staphylococci from Enterococci and Streptococci.

S. pseudintermedius inhabits and sometimes infects the skin of domestic dogs and cats. This organism, too, can carry the genetic material that imparts multiple bacterial resistance. It is rarely implicated in infections in humans, as a zoonosis.

S. epidermidis, a coagulase-negative staphylococcus species, is a commensal of the skin, but can cause severe infections in immune-suppressed patients and those with central venous catheters. S. saprophyticus, another coagulase-negative species that is part of the normal vaginal flora, is predominantly implicated in genitourinary tract infections in sexually-active young women. In recent years, several other Staphylococcus species have been implicated in human infections, notably S. lugdunensis, S. schleiferi, and S. caprae.

Common abbreviations for coagulase-negative staphylococcus species are CoNS and CNS.

The first S. aureus genomes to be sequenced were those of N315 and Mu50 in 2001. Many more complete S. aureus genomes have been submitted to the public databases, making S. aureus one of the most extensively sequenced bacteria. The use of genomic data is now widespread and provides a valuable resource for researchers working with S. aureus. Whole genome technologies such as sequencing projects and microarrays have shown there is an enormous variety of S. aureus strains. Each contains different combinations of surface proteins and different toxins. Relating this information to pathogenic behaviour is one of the major areas of staphylococcal research. The development of molecular typing methods has enabled the tracking of different strains of S. aureus. This may lead to better control of outbreak strains. A greater understanding of how the staphylococci evolve, especially due to the acquisition of mobile genetic elements encoding resistance and virulence genes is helping to identify new outbreak strains and may even prevent their emergence.[10]

The widespread of antibiotic resistance across various strains of S. aureus, or across different species of Staphylococcus has been attributed to horizontal gene transfer of genes encoding antibiotic/metal resistance and virulence. A recent study demonstrates the extent of horizontal gene transfer among Staphylococcus to be much greater than one previously expected, and encompasses genes with functions beyond antibiotic resistance and virulence, and beyond genes residing within the mobile genetic elements.[11]

Various strains of Staphylococcus are available from biological research centres such as the National Collection of Type Cultures (NCTC). 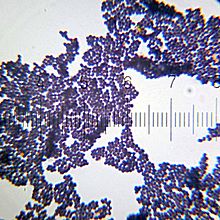 Unknown variety of Staphylococcus. Gram-stained. Numbered ticks on the scale are 11 microns apart.

Members of the genus Staphylococcus frequently colonize the skin and upper respiratory tracts of mammals and birds. Some species specificity has been observed in host range, such that the Staphylococcus species observed on some animals appear more rarely on more distantly related host species.[12] Some of the observed host specificity includes:

Staphylococcus can cause a wide variety of diseases in humans and other animals through either toxin production or penetration. Staphylococcal toxins are a common cause of food poisoning, as it can grow in improperly-stored food items.
The most common sialadenitis is caused by staphylococcus, as bacterial infection.[13]