Grape
This article is about the fruits of the genus Vitis. For the European grapevine, see Vitis vinifera. For other uses, see Grape (disambiguation). 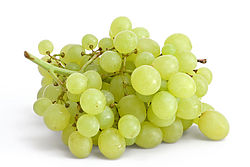 A grape is a non-climacteric fruit, specifically a berry, that grows on the perennial and deciduous woody vines of the genus Vitis. Grapes can be eaten raw or they can be used for making jam, juice, jelly, vinegar, wine, grape seed extracts, raisins, molasses and grape seed oil. Grapes are also used in some kinds of confectionery. Grapes are typically an ellipsoid shape resembling a prolate spheroid.

The cultivation of the domesticated grape began 6,000-8,000 years ago in the Near East.[1] Yeast, one of the earliest domesticated microorganisms, occurs naturally on the skins of grapes, leading to the innovation of alcoholic drinks such as wine. First traces of red wine is seen in ancient Armenia where apparently, to date, the oldest winery was found, dating to around 4,000 BC. By the 9th century AD the city of Shiraz was known to produce some of the finest wines in the Middle east. Thus it has been proposed that Syrah red wine is named after Shiraz a city in Persia where the grape was used to make Shirazi wine. Ancient Egyptian hieroglyphics record the cultivation of purple grapes, and history attests to the ancient Greeks, Phoenicians and Romans growing purple grapes for both eating and wine production. Later, the growing of grapes spread to Europe, North Africa, and eventually North America.

Native purple grapes belonging to the Vitis genus proliferated in the wild across North America, and were a part of the diet of many North American Native Americans, but were considered by European colonists to be unsuitable for wine. The first Old World Vitis vinifera purple grapes were cultivated in California.[citation needed]

Grapes are a type of fruit that grow in clusters of 15 to 300, and can be crimson, black, dark blue, yellow, green, orange, and pink. "White" grapes are actually green in color, and are evolutionarily derived from the purple grape. Mutations in two regulatory genes of white grapes turn off production of anthocyanins which are responsible for the color of purple grapes.[2] Anthocyanins and other pigment chemicals of the larger family of polyphenols in purple grapes are responsible for the varying shades of purple in red wines.[3][4] 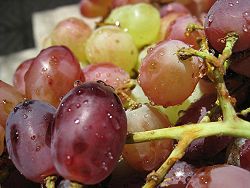 Most grapes come from cultivars of Vitis vinifera, the European grapevine native to the Mediterranean and Central Asia. Minor amounts of fruit and wine come from American and Asian species such as:

According to the Food and Agriculture Organization (FAO), 75,866 square kilometres of the world are dedicated to grapes. Approximately 71% of world grape production is used for wine, 27% as fresh fruit, and 2% as dried fruit. A portion of grape production goes to producing grape juice to be reconstituted for fruits canned "with no added sugar" and "100% natural". The area dedicated to vineyards is increasing by about 2% per year.

The following table of top wine-producers shows the corresponding areas dedicated to grapes for wine making:

There are no reliable statistics that break down grape production by variety. It is, however, believed that the most widely planted variety is Sultana, also known as Thompson Seedless, with at least 3,600 km2. (880,000 acres) dedicated to it. The second most common variety is Airén. Other popular varieties include Cabernet Sauvignon, Sauvignon blanc, Cabernet Franc, Merlot, Grenache, Tempranillo, Riesling and Chardonnay.[5] 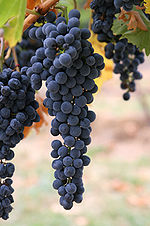 Wine grapes on the vine

Commercially cultivated grapes can usually be classified as either table or wine grapes, based on their intended method of consumption: eaten raw (table grapes) or used to make wine (wine grapes). While almost all of them belong to the same species, Vitis vinifera, table and wine grapes have significant differences, brought about through selective breeding. Table grape cultivars tend to have large, seedless fruit (see below) with relatively thin skin. Wine grapes are smaller, usually seeded, and have relatively thick skins (a desirable characteristic in winemaking, since much of the aroma in wine comes from the skin). Wine grapes also tend to be very sweet: they are harvested at the time when their juice is approximately 24% sugar by weight. By comparison, commercially produced "100% grape juice", made from table grapes is usually around 15% sugar by weight.[6]

Although grape seeds contain many nutrients, some consumers choose seedless grapes; seedless cultivars now make up the overwhelming majority of table grape plantings. Because grapevines are vegetatively propagated by cuttings, the lack of seeds does not present a problem for reproduction. It is, however, an issue for breeders, who must either use a seeded variety as the female parent or rescue embryos early in development using tissue culture techniques.

There are several sources of the seedlessness trait, and essentially all commercial cultivators get it from one of three sources: Thompson Seedless, Russian Seedless, and Black Monukka, all being cultivars of Vitis vinifera. There are currently more than a dozen varieties of seedless grapes. Several, such as Einset Seedless, Reliance and Venus, have been specifically cultivated for hardiness and quality in the relatively cold climates of northeastern United States and southern Ontario.[7]

An offset to the improved eating quality of seedlessness is the loss of potential health benefits provided by the enriched phytochemical content of grape seeds (see Health claims, below).[8][9] 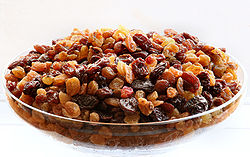 In most of Europe, dried grapes are referred to as "raisins" or the local equivalent. In the UK, three different varieties are recognized, forcing the EU to use the term "Dried vine fruit" in official documents.

A raisin is any dried grape. While raisin is a French loanword, the word in French refers to the fresh fruit; grappe (from which the English grape is derived) refers to the bunch (as in une grappe de raisins).

A currant is a dried Zante Black Corinth grape, the name being a corruption of the French raisin de Corinthe (Corinth grape). Currant has also come to refer to the blackcurrant and redcurrant, two berries unrelated to grapes.

A sultana was originally a raisin made from Sultana grapes of Turkish origin (known as Thompson Seedless in the United States), but the word is now applied to raisins made from either white grapes, or red grapes which are bleached to resemble the traditional sultana.

Comparing diets among Western countries, researchers have discovered that although the French tend to eat higher levels of animal fat, surprisingly the incidence of heart disease remains low in France. This phenomenon has been termed the French Paradox, and is thought to occur from protective benefits of regularly consuming red wine. Apart from potential benefits of alcohol itself, including reduced platelet aggregation and vasodilation,[10] polyphenols (e.g., resveratrol) mainly in the grape skin provide other suspected health benefits, such as:[11]

Although adoption of wine consumption is not recommended by some health authorities,[12] a significant volume of research indicates moderate consumption, such as one glass of red wine a day for women and two for men, may confer health benefits.[13][14][15] Emerging evidence is that wine polyphenols like resveratrol[16] provide physiological benefit whereas alcohol itself may have protective effects on the cardiovascular system.[17]

Grape phytochemicals such as resveratrol (a polyphenol antioxidant), have been positively linked to inhibiting any cancer, heart disease, degenerative nerve disease, viral infections and mechanisms of Alzheimer's disease.[18][19]

Protection of the genome through antioxidant actions may be a general function of resveratrol.[20] In laboratory studies, resveratrol bears a significant transcriptional overlap with the beneficial effects of calorie restriction in heart, skeletal muscle and brain. Both dietary interventions inhibit gene expression associated with heart and skeletal muscle aging, and prevent age-related heart failure.[21]

Resveratrol is the subject of several human clinical trials,[22] among which the most advanced is a one year dietary regimen in a Phase III study of elderly patients with Alzheimer's disease.[23]

Synthesized by many plants, resveratrol apparently serves antifungal and other defensive properties. Dietary resveratrol has been shown to modulate the metabolism of lipids and to inhibit oxidation of low-density lipoproteins and aggregation of platelets.[24]

Resveratrol is found in wide amounts among grape varieties, primarily in their skins and seeds which, in muscadine grapes, have about one hundred times higher concentration than pulp.[25] Fresh grape skin contains about 50 to 100 micrograms of resveratrol per gram.[26]

Anthocyanins and other phenolics 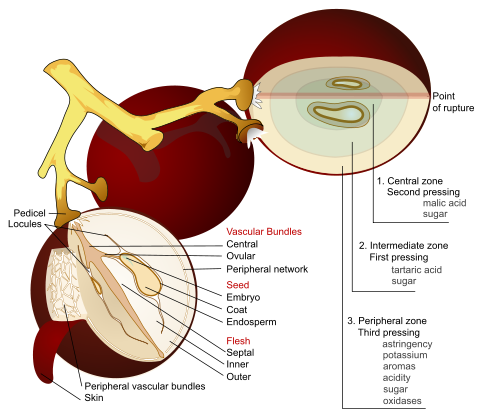 Anthocyanins tend to be the main polyphenolics in purple grapes whereas flavan-3-ols (i.e. catechins) are the more abundant phenolic in white varieties.[27] Total phenolic content, a laboratory index of antioxidant strength, is higher in purple varieties due almost entirely to anthocyanin density in purple grape skin compared to absence of anthocyanins in white grape skin.[27] It is these anthocyanins that are attracting the efforts of scientists to define their properties for human health.[28] Phenolic content of grape skin varies with cultivar, soil composition, climate, geographic origin, and cultivation practices or exposure to diseases, such as fungal infections.

Red wine may offer health benefits more so than white because potentially beneficial compounds are present in grape skin, and only red wine is fermented with skins. The amount of fermentation time a wine spends in contact with grape skins is an important determinant of its resveratrol content.[29] Ordinary non-muscadine red wine contains between 0.2 and 5.8 mg/L,[30] depending on the grape variety, because it is fermented with the skins, allowing the wine to absorb the resveratrol. By contrast, a white wine contains lower phenolic contents because it is fermented after removal of skins.

Since the 1980s, biochemical and medical studies have demonstrated significant antioxidant properties of grape seed oligomeric proanthocyanidins.[34] Together with tannins, polyphenols and polyunsaturated fatty acids, these seed constituents display inhibitory activities against several experimental disease models, including cancer, heart failure and other disorders of oxidative stress.[35][36]

Grape seed oil from crushed seeds is used in cosmeceuticals and skincare products for many perceived health benefits. Grape seed oil is notable for its high contents of tocopherols (vitamin E), phytosterols, and polyunsaturated fatty acids such as linoleic acid, oleic acid and alpha-linolenic acid.[37][38][39]

Commercial juice products from Concord grapes have been applied in medical research studies, showing potential benefits against the onset stage of cancer,[40] platelet aggregation and other risk factors of atherosclerosis,[41] loss of physical performance and mental acuity during aging[42] and hypertension in humans.[43]

In the Bible, grapes are first mentioned when Noah grows them on his farm (Genesis 9:20-21). Instructions concerning wine are given in the book of Proverbs and in the book of Isaiah, such as in Proverbs 20:1 and Isaiah 5:20-25. Deuteronomy 18:3-5,14:22-27,16:13-15 tell of the use of wine during Jewish feasts. Grapes were also significant to both the Greeks and Romans, and their God of agriculture, Dionysus, was linked to grapes and wine, being frequently portrayed with grape leaves on his head.[44] Grapes are especially significant for Christians, who since the Early Church have used wine in their celebration of the Eucharist.[45] Views on the significance of the wine vary between denominations. In Christian art, grapes often represent the blood of Christ, such as the grape leaves in Caravaggio’s John the Baptist.