Root
This article is about the part of a plant. For other uses, see Root (disambiguation). 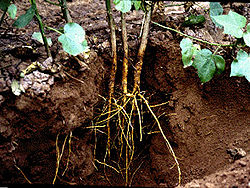 Primary and secondary roots in a cotton plant

In vascular plants, the root is the organ of a plant that typically lies below the surface of the soil. This is not always the case, however, since a root can also be aerial (growing above the ground) or aerating (growing up above the ground or especially above water). Furthermore, a stem normally occurring below ground is not exceptional either (see rhizome). So, it is better to define root as a part of a plant body that bears no leaves, and therefore also lacks nodes. There are also important internal structural differences between stems and roots.

The first root that comes from a plant is called the radicle. The four major functions of roots are 1) absorption of water and inorganic nutrients, 2) anchoring of the plant body to the ground and 3) storage of food and nutrients and 4) to prevent soil erosion. In response to the concentration of nutrients, roots also synthesise cytokinin, which acts as a signal as to how fast the shoots can grow. Roots often function in storage of food and nutrients. The roots of most vascular plant species enter into symbiosis with certain fungi to form mycorrhizas, and a large range of other organisms including bacteria also closely associate with roots.

When dissected, the arrangement of the cells in a root is root hair, epidermis, epiblem, cortex, endodermis, pericycle and lastly the vascular tissue in the centre of a root to transport the water absorbed by the root to other places of the plant. 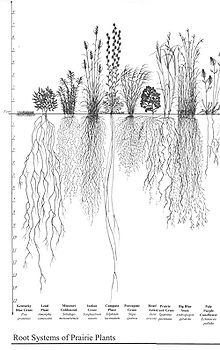 Early root growth is one of the functions of the apical meristem located near the tip of the root. The meristem cells more or less continuously divide, producing more meristem, root cap cells (these are sacrificed to protect the meristem), and undifferentiated root cells. The latter become the primary tissues of the root, first undergoing elongation, a process that pushes the root tip forward in the growing medium. Gradually these cells differentiate and mature into specialized cells of the root tissues.

Roots will generally grow in any direction where the correct environment of air, mineral nutrients and water exists to meet the plant's needs. Roots will not grow in dry soil. Over time, given the right conditions, roots can crack foundations, snap water lines, and lift sidewalks. At germination, roots grow downward due to gravitropism, the growth mechanism of plants that also causes the shoot to grow upward. In some plants (such as ivy), the "root" actually clings to walls and structures.

In plants with secondary growth, the vascular cambium, originating between the xylem and the phloem, forms a cylinder of tissue along the stem and root. The vascular cambium forms new cells on both the inside and outside of the cambium cylinder, with those on the inside forming secondary xylem cells, and those on the outside forming secondary phloem cells. As secondary xylem accumulates, the "girth" (lateral dimensions) of the stem and root increases. As a result, tissues beyond the secondary phloem (including the epidermis and cortex, in many cases) tend to be pushed outward and are eventually "sloughed off" (shed).

At this point, the cork cambium begins to form the periderm, consisting of protective cork cells containing suberin. In roots, the cork cambium originates in the pericycle, a component of the vascular cylinder.

The vascular cambium produces new layers of secondary xylem annually. The xylem vessels are dead at maturity but are responsible for most water transport through the vascular tissue in stems and roots.

A true root system consists of a primary root and secondary roots (or lateral roots).

Aerating roots of a mangrove 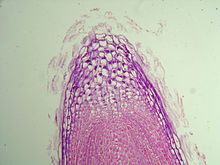 The growing tip of a fine root 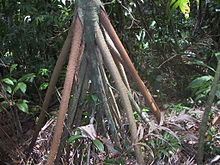 The stilt roots of Socratea exorrhiza

The roots, or parts of roots, of many plant species have become specialized to serve adaptive purposes besides the two primary functions described in the introduction. 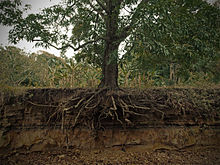 Cross section of a mango tree

The distribution of vascular plant roots within soil depends on plant form, the spatial and temporal availability of water and nutrients, and the physical properties of the soil. The deepest roots are generally found in deserts and temperate coniferous forests; the shallowest in tundra, boreal forest and temperate grasslands. The deepest observed living root, at least 60 m below the ground surface, was observed during the excavation of an open-pit mine in Arizona, USA. Some roots can grow as deep as the tree is high. The majority of roots on most plants are however found relatively close to the surface where nutrient availability and aeration are more favourable for growth. Rooting depth may be physically restricted by rock or compacted soil close below the surface, or by anaerobic soil conditions. 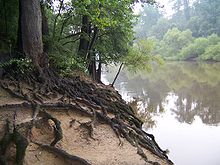 Tree roots at Cliffs of the Neuse State Park

The pattern of development of a root system is termed root architecture, and is important in providing a plant with a secure supply of nutrients and water as well as anchorage and support. The architecture of a root system can be considered in a similar way to above-ground architecture of a plant—i.e. in terms of the size, branching and distribution of the component parts. In roots, the architecture of fine roots and coarse roots can both be described by variation in topology and distribution of biomass within and between roots. Having a balanced architecture allows fine roots to exploit soil efficiently around a plant, but the plastic nature of root growth allows the plant to then concentrate its resources where nutrients and water are more easily available. A balanced coarse root architecture, with roots distributed relatively evenly around the stem base, is necessary to provide support to larger plants and trees.

The fossil record of roots – or rather, infilled voids where roots rotted after death – spans back to the late Silurian,[3] but their identification is difficult, because casts and molds of roots are so similar in appearance to animal burrows – although they can be discriminated on the basis of a range of features.[4]

Sugar beet is an important source of sugar. Yam roots are a source of estrogen compounds used in birth control pills. The fish poison and insecticide rotenone is obtained from roots of Lonchocarpus spp. Important medicines from roots are ginseng, aconite, ipecac, gentian and reserpine. Several legumes that have nitrogen-fixing root nodules are used as green manure crops, which provide nitrogen fertilizer for other crops when plowed under. Specialized bald cypress roots, termed knees, are sold as souvenirs, lamp bases and carved into folk art. Native Americans used the flexible roots of white spruce for basketry.

Tree roots can heave and destroy concrete sidewalks and crush or clog buried pipes. The aerial roots of strangler fig have damaged ancient Mayan temples in Central America and the temple of Angkor Wat in Cambodia.

Vegetative propagation of plants via cuttings depends on adventitious root formation. Hundreds of millions of plants are propagated via cuttings annually including chrysanthemum, poinsettia, carnation, ornamental shrubs and many houseplants.

Roots can also protect the environment by holding the soil to prevent soil erosion. This is especially important in areas such as sand dunes. 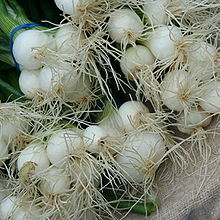