The cherry is the fruit of many plants of the genus Prunus, and is a fleshy stone fruit. The cherry fruits of commerce are usually obtained from a limited number of species, including especially cultivars of the wild cherry, Prunus avium.

The name 'cherry', often as the compound term 'cherry tree', may also be applied to many other members of the genus Prunus, or to all members of the genus as a collective term. The fruits of many of these are not cherries, and have other common names, including plum, apricot, peach, and others. The name 'cherry' is also frequently used in reference to cherry blossom.

True cherry fruits are members of the subgenus Cerasus, which is distinguished by having the flowers in small corymbs of several together (not singly, nor in racemes), and by having a smooth fruit with only a weak groove or none along one side. The subgenus is native to the temperate regions of the Northern Hemisphere, with two species in America, three in Europe, and the remainder in Asia.

The majority of eating cherries are derived from either Prunus avium, the wild cherry (sometimes called the sweet cherry), or from Prunus cerasus, the sour cherry.

The list below contains many Prunus species that bear the common name cherry, but they are not necessarily members of the subgenus Cerasus, or bear edible fruit. For a complete list of species, see Prunus. Some common names listed here have historically been used for more than one species, e.g. "rock cherry" is used as an alternative common name for both P. prostrata and P. mahaleb.

The native range of the wild cherry extends through most of Europe, western Asia and parts of northern Africa, and the fruit has been consumed through its range since prehistoric times. A cultivated cherry is recorded as having been brought to Rome by Lucius Licinius Lucullus from northeastern Anatolia, modern day Turkey, also known as the Pontus region, in 72 BC.[1]

A form of cherry was introduced into England at Teynham, near Sittingbourne in Kent by order of Henry VIII, who had tasted them in Flanders.[2][3][4]

The English word cherry, French cerise and Spanish cereza all come from the classical Greek (κέρασος) through the Latin cerasum, thus the ancient Roman place name Cerasus, today a city in northern Turkey Giresun from which the cherry was first exported to Europe.[5]

Cherries contain anthocyanins, the red pigment in berries. Cherry anthocyanins have been shown to reduce pain and inflammation in rats.[6] Anthocyanins are also potent antioxidants under active research for a variety of potential health benefits. According to a study funded by the Cherry Marketing Institute presented at the Experimental Biology 2008 meeting in San Diego, rats that received whole tart cherry powder mixed into a high-fat diet did not gain as much weight or build up as much body fat, and their blood showed much lower levels of inflammation indicators that have been linked to heart disease and diabetes. In addition, they had significantly lower blood levels of cholesterol and triglycerides than the other rats.[7]

Cherry trees also provide food for the caterpillars of several Lepidoptera. See List of Lepidoptera which feed on Prunus.

The cultivated forms are of the species wild cherry (P. avium) to which most cherry cultivars belong, and the sour cherry (P. cerasus), which is used mainly for cooking. Both species originate in Europe and western Asia; they do not cross-pollinate. Some other species, although having edible fruit, are not grown extensively for consumption, except in northern regions where the two main species will not grow. Irrigation, spraying, labor and their propensity to damage from rain and hail make cherries relatively expensive. Nonetheless, there is high demand for the fruit. Cherry is harvested by using shaker in commercial production.[8]

Cherries have a very short growing season and can grow in most temperate latitudes. The peak season for cherries is in the summer. In Australia, they are usually at their peak in late December, in southern Europe in June, in North America in June, in south British Columbia (Canada) in July to mid August, and in the UK in mid July. In many parts of North America, they are among the first tree fruits to ripen.

In Orange, NSW - A cool climate cherry region, the season begins in mid November and finishes towards the end of January. 'Kordia' is an early variety which ripens during the beginning of December, 'Lapins peak' near the end of December, and 'Sweethearts' appear slightly later. 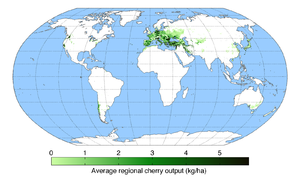 Major commercial cherry orchards in Europe are in Turkey (mainly Anatolia), Italy and Spain. To a smaller extent is also grown in the Baltic States and southern Scandinavia.

In the United States, most sweet cherries are grown in Washington, California, Oregon, and Michigan.[10] Important sweet cherry cultivars include Bing, Brooks, Tulare, King and Rainier. In addition, the Lambert variety is grown on the eastern side of Flathead Lake in northwestern Montana.[11] Both Oregon and Michigan provide light-colored Royal Ann (Napoleon; alternately Queen Anne) cherries for the maraschino cherry process. Most sour (also called tart) cherries are grown in Michigan, followed by Utah, New York, and Washington.[10] Additionally, native and nonnative cherries grow well in Canada (Ontario and British Columbia). Sour cherries include Nanking and Evans cherry. Traverse City, Michigan claims to be the "Cherry Capital of the World", hosting a National Cherry Festival and making the world's largest cherry pie. The specific region of northern Michigan is known for tart cherry production is referred to as the "Traverse Bay" region.

In Australia, cherries are grown in all the states except for the Northern Territory. The major producing regions are located in the temperate areas within New South Wales, Victoria, South Australia and Tasmania. Western Australia has limited production in the elevated parts in southwest of the state. Key production areas include Young, [[Orange, New South Wales|Orange] and Bathurst in New South Wales, Wandin, the Goulburn and Murray valley areas in Victoria, the Adelaide Hills region in South Australia, and the Huon and Derwent Valleys in Tasmania.

The New South Wales town of Young is called the "Cherry Capital of Australia" and hosts the National Cherry Festival.