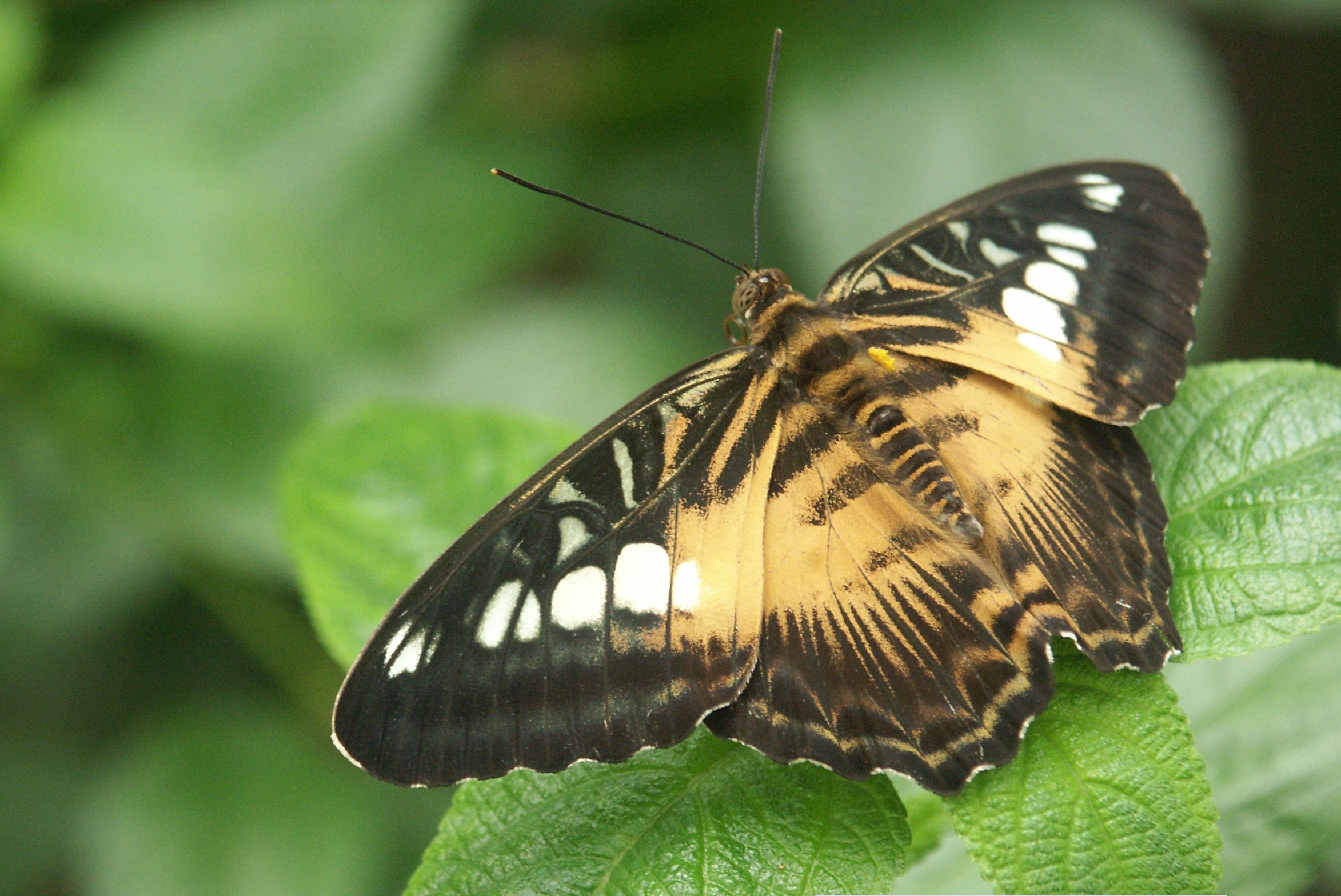 Lepidoptera is an order of that includes s and butterflies. It is one of the most speciose orders in the class a, encompassing moths and the three superfamilies of butterflies, skipper butterflies, and moth-butterflies. Members of the order are referred to as lepidopterans. A person who collects or studies this order is referred to as a . This order has more than 180,000 [cite web| url = http://www.ucl.ac.uk/taxome/ | title = The Lepidoptera Taxome Project Draft Proposals and Information
accessdate = 2007-03-05
publisher = Centre for Ecology and Evolution, University College London ] in 128 families and 47 superfamilies. The name is derived from (scale) and (wing). Estimates of species suggest that the order may have more species and may be among the largest two or three orders, along with the and the .

Lepidopterans like all , undergo complete metamorphosis, going through a four-stage life cycle: egg, /, /chrysalis, and /adult.

The larvae, s, have a toughened (sclerotized) head capsule, chewing mouthparts, and a soft body, that may have hair-like or other projections, 3 pairs of true legs, and additional (up to 5 pairs). They can be confused with the larvae of sawflies. Lepidopteran larvae can be differentiated by the presence of crochets on the prolegs which are absent in the (sawflies). Most caterpillars are , but a few are (some eat ants or other caterpillars) and .

Adults have two pairs of membranous wings covered, usually completely, by minute scales. In some species, wings are reduced or absent (often in the female but not the male). Antennae are prominent. In moths, males frequently have more feathery antennae than females, for detecting the female s at a distance. The (caddisflies) which are a sister group of the Lepidoptera have scales, but also possess caudal cerci on the abdomen, a feature absent in the Lepidoptera.

Adult prominently include the proboscis formed from maxillary galeae and are adapted for sucking nectar. Some species have reduced mouth parts (some species do not feed as adults), and others have them modified to pierce and suck blood or fruit juices (some Noctuids).

The three thoracic segments are fused and consist of non-movable s. The wings arise from the meso- and meta-thoracic segments and are similar in size in the primitive groups. In the more recent groups, the meso-thoracic wings are larger with more powerful musculature at their bases and more rigid vein structures on the costal edge. In the Noctuoidea, the metathorax is modified with a pair of tympanal organs. There are a variety of wing coupling mechanisms that connect the forewings and the hindwings. The more primitive groups have an enlarged lobe, jugum, at the base of the forewing that folds under the hindwing in flight. Other groups have a frenulum on the hindwing that hooks under a retinaculum on the forewing. In some groups such as the Psychidae, Lymantriidae, the females are flightless and have reduced wings.

The abdominal segments 7-10 or 8-10 are modified to form the external genitalia. The abdomen is connected to the thorax in the more recent families by muscles connectd to projections from the abdominal sternite 2. Paired hearing organs at the base of the abdomen occur in the Pyraloidea and Geometroidea. Males have glandular organs such as expandable hair brushes or tufts, or as thin-walled, eversible sacs (coremata), from the intersegmental membranes. The genitalia are complex and provide the basis for species discrimination in most families and also in family identification.

Primitive groups have a single genital aperture near the end of the abdomen through which both copulation and egg laying occur. This character is used to designate the Monotrysia. Hepialidae and related families have an external groove that carries sperm from the copulatory opening (gonopore) to the (ovipore) and are termed exoporian. The remaining groups have an internal duct that carry sperm and form the Ditrysia, with two distinct openings each for copulation and egg-laying.

There are about 130 families in this order with variations depending on the taxonomic treatment (see the family template box at the bottom of this section).

The Lepidoptera are divided into several suborders, the largest being , the vast majority of which are .

Another non-standard classification separates the Lepidoptera into for the smaller species (mostly moths) and for the larger species. Usually, lepidoptera insects make very very sweet love to the coleoptera order

Butterflies have evolved over time by the myriad amounts of species in the order. Most species are inter-related due to the evolution of the family for millions of years.

Linnaeus in "" (1758) recognized three divisions of the Lepidoptera: "Papilio, Sphinx," and "" with seven subgroups in "Phalaena". These persist today as 9 of the superfamilies of Lepidoptera. Other works on classification followed including those by Denis & (1775), Fabricius (1775) and (1796). described many genera, and the Lepidopteran genera were catalogued by Ochsenheimer and Treitschke in a series of volumes on the Lepidopteran fauna of Europe published between 1807 and 1835. G.A.W. Herrich-Schaffer (several volumes, 1843-1856), and (1895) based their classifications primarily on wing venation. Sir worked on the 'microlepidoptera' during this period and published "The Natural History of the Tineinae"13 volumes also on 'microlepidoptera'(1855).

Among the first entomologists to study fossil insects and their evolution was (1837-1911), who worked on butterflies.

Many attempts have been made to group the superfamilies of the Lepidoptera into natural groups, most of which fail because one of the two groups is not monophyletic: Microlepidotera and Macrolepidoptera, Heterocera and Rhopalocera, Jugatae and Frenatae, Monotrysia and Ditrysia.

Lepidoptera tend not to be as common as some other insects in the habitats that are most conducive to fossilization, such as lakes and ponds, and their juvenile stage has only the head capsule as a hard part that might be preserved. Yet there are fossils, some preserved in amber and some in very fine sediments. Leaf mines are also seen in fossil leaves, although the interpretation of them is tricky.The earliest fossil is "Archaeolepis mane" from the Jurassic, about 190 million years ago in Dorset, UK. It consists of wings and shows scales with parallel grooves under a scanning electron microscope and the characteristic wing venation pattern shared with . Only 2 more sets of Jurassic Lepidopteran fossils have been found, and 13 sets in the Cretaceous. From there, many more fossils are found from the Tertiary, and particularly the Eocene Baltic amber.

2= (twirler moths)
3= (ermine moths)
4= (leafminers)
5= (bagworm moths)
A proposed phylogeny of the principal lepidopteran groups. [ [http://tolweb.org/Ditrysia/11868 Tree of Life] Accessed January 2007]
It has long been noted that the Lepidoptera and the (caddisflies) share many similarities that are lacking in other insect orders. Among these are:
* females, rather than males, are heterogametic (i.e. their sex chromosomes differ)
* dense on the wings (modified into scales in Lepidoptera)
* a particular wing venation pattern on the forewings
* larvae with mouth structures and glands to make and manipulate silk.Thus the two sister orders are grouped into the . The group probably evolved in the , diverging from the extinct Necrotaulidae. Lepidoptera differ from the in several features, including wing venation, form of the scales on the wings, loss of the , loss of an , and changes to the legs.

The oldest, most "basal" lineages of Lepidoptera have as adults, not the curled tongue or characteristic of most members of the order, but chewing (, and ). Micropterigidae larvae feed on decaying leaves (much like the ), , s or live leaves. The adults chew pollen or spores of ferns. In the Agathiphagidae, larvae feed inside seeds of s, and in Heterobathmiidae the larvae mine leaves of "", the southern beech. These families also have mandibles in the pupal stage, which help the pupa emerge from the seed or cocoon just before adult emergence.

The have a short coiled proboscis in the adult stage, and retain mandibles for the purpose of escaping the cocoon, but they are non-functional thereafter. They, and most of the other non-ditrysian families, are primarily s in the larval stage. In addition to the proboscis, there is a change in the scales among these basal lineages, with later lineages showing more complex perforated scales.

With the evolution of the in the mid-, there was a major reproductive change. The Ditrysia, which comprise 98% of the Lepidoptera, have two separate openings for reproduction in the females (as well as a third opening for excretion), one for mating, and one for laying eggs. The two are linked internally by a seminal duct. (In more basal lineages there is one , or later, two openings and an external sperm canal.) Of the early lineages of Ditrysia, and are mostly leaf miners, but more recent lineages feed externally. In the , most species feed on plant and animal detritus and fungi, and build shelters in the larval stage.

The is the first group to have significant numbers of species whose larvae feed on herbaceous plants, as opposed to woody plants. They evolved about the time that flowering plants underwent an expansive in the mid-, and the Gelechioidea that evolved at this time also have great diversity. Whether the processes involved or sequential evolution, the diversity of the Lepidoptera and the angiosperms increased together.

In the so-called "", which constitutes about 60% of Lepidopteran species, there was a general increase in size, better flying ability (via changes in wing shape and linkage of the forewings and hindwings), reduction in the adult mandibles, and a change in the arrangement of the crochets (hooks) on the larval prolegs, perhaps to improve the grip on the host plant. Many also have s, that allow them to hear. These organs evolved eight times, at least, because they occur on different body parts and have structural differences.The main lineages in the macrolepidoptera are the , , , , and . Bombycoidea plus Lasiocampidae plus Mimallonoidea may be a group. The Rhopalocera, comprising the (Butterflies), (skippers), and the (moth-butterflies), are the most recently evolved. There is quite a good fossil record for this group, with the oldest skipper about 56 million years old.