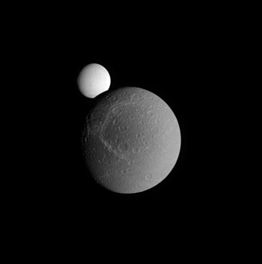 A natural satellite or moon is a celestial body that orbits a planet or smaller body, which is called its primary. The two terms are used synonymously for non-artificial satellites of planets, of dwarf planets, and of minor planets.

As of July 2009[update], 336 bodies in the solar system are formally classified as moons[citation needed]. They include 168 orbiting six of the eight planets, seven orbiting three of the five dwarf planets, 104 asteroid moons, and 58 satellites of trans-Neptunian objects, some of which will likely turn out to be smaller or dwarf planets. Some 150 additional small bodies were observed within rings of Saturn, but they were not tracked long enough to establish orbits. Planets around other stars are likely to have natural satellites as well, although none have yet been observed. 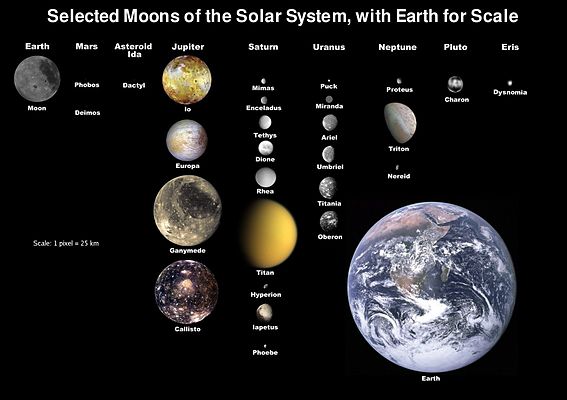 Nineteen moons are large enough to be round, and one, Titan, has a substantial atmosphere.

Of the inner planets, Mercury and Venus have no moons; Earth has one large moon, known as the Moon; and Mars has two tiny moons, Phobos and Deimos. The large gas giants have extensive systems of moons, including half a dozen comparable in size to Earth's moon: the four Galilean moons, Saturn's Titan, and Neptune's Triton. Saturn has an additional six mid-sized moons massive enough to have achieved hydrostatic equilibrium, and Uranus has five. It has been suggested that some satellites may potentially harbour life, though there is currently no direct evidence to support this theory.

The Earth–Moon system is unique in that the ratio of the mass of the Moon to the Earth is much greater than any other planet-moon ratio in the Solar System, and the Moon's orbit with respect to the Sun is always concave.[1]

Among the dwarf planets, Ceres has no moons. Pluto has the relatively large moon Charon and three smaller moons. Haumea has two moons, and Eris has one. The Pluto–Charon system is unusual in that the center of mass lies in open space between the two, a characteristic of a double planet system.

The natural satellites orbiting relatively close to the planet on prograde, uninclined circular orbits (regular satellites) are generally believed to have been formed out of the same collapsing region of the protoplanetary disk that created its primary. In contrast, irregular satellites (generally orbiting on distant, inclined, eccentric and/or retrograde orbits) are thought to be captured asteroids possibly further fragmented by collisions. Most of the major moons in the solar system have regular orbits, while most of the small moons have irregular orbits.[2] The Earth's Moon[3] and possibly Charon[4] are exceptions among large bodies in that they are believed to have originated by the collision of two large proto-planetary objects (see the giant impact hypothesis). The material that would have been placed in orbit around the central body is predicted to have reaccreted to form one or more orbiting moons. As opposed to planetary-sized bodies, asteroid moons are thought to commonly form by this process. Triton is another exception; although large and in a close, circular orbit, its motion is retrograde and it is thought to be a captured dwarf planet.

The regular natural satellites in the Solar System are tidally locked to their primaries, meaning that the same side of the moon always faces the planet. The only known exception is Saturn's moon Hyperion, which rotates chaotically because of the gravitational influence of Titan.

In contrast, the outer moons of the gas giants (irregular satellites) are too far away to have become locked. For example, Jupiter's moon Himalia, Saturn's moon Phoebe, and Neptune's moon Nereid have rotation period in the range of ten hours, while their orbital periods are hundreds of days.

No moons of moons (natural satellites that orbit the natural satellite of another body) are known. In most cases, the tidal effects of the primary would make such a system unstable.

However, calculations performed after the recent detection[5] of a possible ring system around Saturn's moon Rhea indicate that satellites orbiting Rhea would have stable orbits. Furthermore, the suspected rings are thought to be narrow,[6] a phenomenon normally associated with shepherd moons. However, targeted images taken by the Cassini spacecraft failed to detect any rings associated with Rhea.[7]

It has also been proposed that Saturn's satellite Iapetus possessed a sub-satellite in the past; this is one of several hypotheses that have been put forward to account for its equatorial ridge.[8]

The discovery of 243 Ida's moon Dactyl in the early 1990s confirmed that some asteroids have moons; indeed, 87 Sylvia has two. Some, such as 90 Antiope, are double asteroids with two comparably sized components. 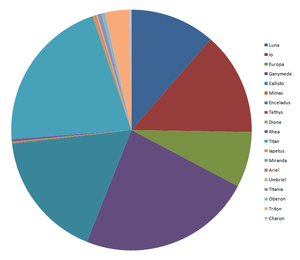 Proteus is the largest irregularly shaped moon. All other known moons the size of Miranda and above have lapsed into a rounded ellipsoid under hydrostatic equilibrium. The planets are not truly spherical but oblate spheroids, squatter at the pole than at the equator, but with a constant equatorial diameter. The larger moons, however, since they are all tidally locked, are scalene, squat at the poles but with the equatorial axis directed at their planet longer than the axis along their direction of motion. The most distorted moon is Mimas, where the major axis is 9% greater than its polar axis and 5% greater than its other equatorial axis, giving it a notable egg shape. The effect is smaller with the largest moons, where self gravity is greater relative to tidal distortion, especially when they orbit a less massive planet or at a greater distance, as our moon does.

Of the nineteen known moons massive enough to have lapsed into hydrostatic equilibrium, several remain geologically active today. Io is the most volcanically active body in the Solar System, while Europa, Enceladus, Titan and Triton display evidence of ongoing tectonic activity and cryovolcanism. In the first three cases, the geological activity is powered by the tidal heating resulting from having eccentric orbits close to their gas giant primaries. (This mechanism would have also operated on Triton in the past, before its orbit was circularized.) Many other moons, such as Earth's Moon, Ganymede, Tethys and Miranda, show evidence of past geological activity, resulting from energy sources such as the decay of their primordial radioisotopes, greater past orbital eccentricities (due in some cases to past orbital resonances), or the differentiation or freezing of their interiors. Enceladus and Triton both have active features resembling geysers, although in the case of Triton solar heating appears to provide the energy. Titan and Triton have significant atmospheres; Titan also has hydrocarbon lakes, and presumably methane rain. Four of the largest moons, Europa, Ganymede, Callisto, and Titan, are thought to have subsurface oceans of liquid water, while smaller Enceladus may have localized subsurface liquid water.

Natural satellites of the Solar System

The 7 largest natural satellites in the Solar System (those bigger than 2,500 km across) are Jupiter's Galilean moons (Ganymede, Callisto, Io, and Europa), Saturn's moon Titan, Earth's moon, and Neptune's captured moon Triton. Triton, the smallest of these, has more mass than all smaller moons together. Similarly in the next size group of 9 moons, between 1,000 km and 1,600 km across, Titania, Oberon, Rhea, Iapetus, Charon, Ariel, Umbriel, Dione, and Tethys, the smallest, Tethys, has more mass than all smaller moons together. As well as the moons of the various planets, there are also over 80 known moons of the dwarf planets, asteroids and other small solar system bodies. Some studies estimate that up to 15% of all trans-Neptunian objects could have satellites.

The following is a comparative table classifying the moons of the solar system by diameter. The column on the right includes some notable planets, dwarf planets, asteroids, and Trans-Neptunian Objects for comparison. The moons of the planets are named after mythological figures. These are predominately Greek, except for the Uranian moons, which are named after Shakespearean characters. The nineteen bodies massive enough to have achieved hydrostatic equilibrium are in bold in the chart below and labeled on the chart at right, though a few of the smaller ones are not visible at the scale of the chart. Minor planets suspected but not proven to have achieved a hydrostatic equilibrium are italicized in the table below.

The first known natural satellite was the Moon, but it was considered a "planet" until Copernicus' introduction of heliocentrism in 1543. Until the discovery of the Galilean satellites in 1610, however, there was no opportunity for referring to such objects as a class. Galileo chose to refer to his discoveries as Planetæ ("planets"), but later discoverers chose other terms to distinguish them from the objects they orbited.

Christiaan Huygens, the discoverer of Titan, was the first to use the term moon for such objects, calling Titan Luna Saturni or Luna Saturnia – "Saturn's moon" or "The Saturnian moon", because it stood in the same relation to Saturn as the Moon did to the Earth.

The first to use of the term satellite to describe orbiting bodies was the German astronomer Johannes Kepler in his pamphlet Narratio de Observatis a se quatuor Iouis satellitibus erronibus ("Narration About Four Satellites of Jupiter Observed") in 1610. He derived the term from the Latin word satelles, meaning "guard", "attendant", or "companion", because the satellites accompanied their primary planet in their journey through the heavens.

As additional moons of Saturn were discovered the term "moon" was abandoned. Giovanni Domenico Cassini sometimes referred to his discoveries as planètes in French, but more often as satellites.

The term satellite thus became the normal one for referring to an object orbiting a planet, as it avoided the ambiguity of "moon". In 1957, however, the launching of the artificial object Sputnik created a need for new terminology. The terms man-made satellite or artificial moon were very quickly abandoned in favor of the simpler satellite, and as a consequence, the term has become linked primarily with artificial objects flown in space – including, sometimes, even those not in orbit around a planet.

Because of this shift in meaning, the term moon, which had continued to be used in a generic sense in works of popular science and in fiction, has regained respectability and is now used interchangeably with satellite, even in scientific articles. When it is necessary to avoid both the ambiguity of confusion with the Earth's moon on the one hand, and artificial satellites on the other, the term natural satellite (using "natural" in a sense opposed to "artificial") is used.

The definition of a moon 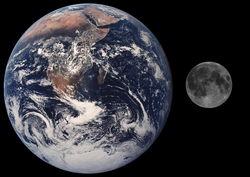 Comparison of Earth and the Moon 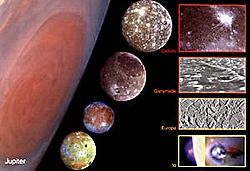 Comparison of (a part of) Jupiter
and its four largest moons.

There is not an established lower limit on what is considered a moon. Every body with an identified orbit, some as small as a kilometer across, has been identified as a moon, though objects a tenth that size within Saturn's rings, which have not been directly observed, have been called moonlets. Small asteroid moons, such as Dactyl, have also been called moonlets.

The upper limit is also vague. When the masses of two orbiting bodies are similar enough that one cannot be said to orbit the other[citation needed], they are described as a double body rather than primary and satellite. Asteroids such as 90 Antiope are considered double asteroids, but they have not forced a clear definition of what constitutes a moon. Some authors consider the Pluto-Charon system to be a double (dwarf) planet. The most common dividing line on what is considered a moon rests upon whether the barycentre is below the surface of the larger body, though this is somewhat arbitrary, as it relies on distance as well as relative mass.