90482 Orcus is a trans-Neptunian object in the Kuiper belt with a large moon. It was discovered on February 17, 2004 by Michael Brown of Caltech, Chad Trujillo of the Gemini Observatory, and David Rabinowitz of Yale University. Precovery images as early as November 8, 1951 were later identified.[1] It is thought by Michael Brown to be "nearly certainly" a dwarf planet,[11][12] although the IAU has not yet formally designated it as such.

Orcus is a plutino, locked in a 2:3 resonance with Neptune, making two revolutions around the Sun, while Neptune makes three. This is much like Pluto, except that it is constrained to always be in the opposite phase of its orbit from Pluto: Orcus is at aphelion when Pluto is at perihelion and vice versa. Because of this, along with its large moon Vanth that recalls Pluto's large moon Charon, Orcus has been seen as the anti-Pluto. This was a major consideration in selecting its name, as the deity Orcus was the Etruscan equivalent of the Roman Pluto, and later became an alternate name for Pluto.[13]

The surface of Orcus is relatively bright with albedo reaching 30%, grey in color and water rich. The ice is predominantly in crystalline form, which may be related to past cryovolcanic activity. Other compounds like methane or ammonia may also be present. The existence of a satellite allowed astronomers to determine the mass of the system, which is approximately equal to that of the Saturnian moon Tethys. The ratio of masses of Orcus and Vanth is uncertain, possibly anywhere from 1:33 to 1:12. The diameter of Orcus is 800–900 km, while Vanth is thought to be 280 to 380 km, depending on what its albedo turns out to be. 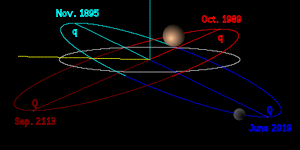 The orbits of Orcus (blue), Pluto (red) and Neptune (grey). Orcus and Pluto are shown in the April 2006 positions. The dates of their perihelia (q) and aphelia (Q) are also marked.

Orcus is a large plutino (an object in 2:3 orbital resonance with Neptune).[2] Orcus's 247-year orbit is shaped similarly to Pluto's (both have perihelia above the ecliptic), but is differently oriented. Although at one point its orbit approaches that of Neptune, the resonance between the two bodies means that Orcus itself is always a great distance away from Neptune (there is always an angular separation of over 60 degrees between them). Over a 14,000 year period Orcus stays more than 18 AU from Neptune.[14] Because their mutual resonance with Neptune constrains Orcus and Pluto to remain in opposite phases of their otherwise very similar motions, Orcus is sometimes described as the "anti-Pluto".[13]

Orcus is currently 47.8 AU from the Sun[9] and will come to aphelion (farthest distance from the Sun) in 2019.[10] Simulations by the Deep Ecliptic Survey (DES) show that over the next 10 million years Orcus can acquire a perihelion distance (qmin) as small as 27.8 AU.[2]

The rotation period is not known. Different photometric surveys have produced different results. Some show low amplitude variations with periods ranging from 7 to 21 hours, while others showed no variability.[15] The value obtained by Ortiz et al., about 10 hours, is often cited in the literature.[7] The rotational poles of Orcus probably coincide with the orbital poles of its moon, Vanth. This means that Orcus is currently viewed pole-on, which could explain the near absence of any rotational modulation of its brightness.[15] The true rotational period may coincide with the 9.5-day orbital period of Vanth.[5]

Under the guidelines of the International Astronomical Union's naming conventions, objects with a similar size and orbit to that of Pluto are named after underworld deities. Accordingly, the discoverers suggested naming the object after Orcus, a god of the dead in Etruscan and Roman mythology. The name was also a private reference to the homonymous Orcas Island, where Brown's wife Diane had lived as a child and which they visit frequently.[16] Orcus was approved and published on November 22, 2004.

The absolute magnitude of Orcus is about 2.3[1] (comparable with the 2.6 of cubewano 50000 Quaoar). The detection of Orcus by the Spitzer space telescope in the far infrared[4] and by Herschel Space Telescope in submillimeter constrains its diameter to 850 ± 90 km.[6] The diameter determined based solely on Spitzer measurements is 940 ± 70 km.[5] Orcus appears to have an albedo of about 22% to 34%,[6] which may be typical of trans-Neptunian objects approaching the 1000 km diameter range.[17]

In the magnitude and size estimates reported above it was assumed that Orcus is a singular object. The presence of a relatively large satellite (Vanth, see below) may change them considerably. The absolute magnitude of Vanth is estimated at 4.88, which means that it is about 11 times fainter than Orcus itself. If the albedos of both bodies are the same then the size of Orcus is about 900 km (assuming single body diameter of 940 km), while the size of Vanth is about 280 km. If, however, the albedo of Vanth is two times lower than that of Orcus, their sizes are 860 and 380 km, respectively.[5]

Since Orcus is known to be a binary system, the mass of the system has been estimated to be 6.32 ± 0.05×1020 kg, or about 3.8% the mass of largest known dwarf planet Eris.[5] How this mass is partitioned between Orcus and Vanth depends of their relative sizes. If the satellite's size is less than 1/3d of that of the primary, then its mass is only 3% of the total mass. On the other hand, if the size of Vanth is 380 km (see above), then its mass could be as high as 1/13 of the total system mass or about 8% of the mass of Orcus.[5]

The orbital resonances of Orcus and Pluto in a rotating frame with a period equal to Neptune's orbital period. (Neptune is held stationary.)

The first spectroscopic observations in 2004 showed that the visible spectrum of Orcus is flat (neutral in color) and featureless, while in the near-infrared there were moderately strong water absorption bands at 1.5 and 2.0 μm. Thus Orcus appeared to be different from other Trans-Neptunian objects like Ixion with red visible and often featureless infrared spectra.[18] Further Infrared observations in 2004 by the European Southern Observatory and the Gemini telescope give results consistent with mixtures of water ice and carbonaceous compounds, such as tholins.[8] The water and methane ices can cover no more than 50% and 30% of the surface, respectively.[19] This means the proportion of ice on the surface is less than on Charon, but similar to that on Triton.[19]

Later in 2008–2010 new infrared spectroscopic observations with a higher signal-to-noise ratio revealed additional spectral features. Among them are a deep water ice absorption band at 1.65 μm, which is an evidence of the crystalline water ice on the surface of Orcus, and a new absorption band at 2.22 μm. The origin of the latter feature is not completely clear. It can be caused either by ammonia/ammonium dissolved in the water ice or by methane/ethane ices.[7] The radiative transfer modeling showed that a mixture of water ice, tholins (as a darkening agent), ethane ice and ammonium ion (NH4+) provides the best match to the spectra, while a combination of water ice, tholins, methane ice and ammonia hydrate gives a slightly inferior result. On the other hand, a mixture of only ammonia hydrate, tholins and water ice failed to provide a satisfactory match.[15] So, as of 2010, the only reliably identified compounds on the surface of Orcus are crystalline water ice and, possibly, dark tholins. A firm identification of ammonia, methane and other hydrocarbons requires better infrared spectra.[15]

Comparison with moons and other TNOs 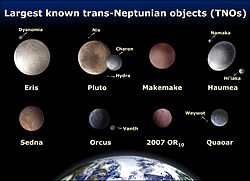 Orcus straddles the edge for trans-Neptunian objects massive enough to retain volatiles such as methane on the surface.[15] The reflectance spectrum of Orcus shows the deepest water-ice absorption bands of any Kuiper belt object (KBO) that is not associated with the Haumea collisional family.[5] The large icy satellites of Uranus have infrared spectra quite similar to that of Orcus.[5] Among other trans-Neptunian objects Pluto's moon Charon appears to be most similar to Orcus. It has a higher albedo but very similar visible and near-infrared spectra. Their densities are also similar and both have water ice rich surfaces.[7] Quaoar—a trans-Neptunian object of similar size—has strong water ice absorption features in its spectra but also has a very red color in the visible implying the presence of the ultrared matter on its surface. Dwarf planet Haumea and objects from its collisional family have much higher albedos and much deeper water absorption bands than Orcus. Finally, (208996) 2003 AZ84—another large object in 3:2 resonance with Neptune—has spectral properties very similar to Orcus.[15]

The presence of crystalline water ice, and possibly ammonia ice may indicate that a renewal mechanism was active in the past on the surface of Orcus.[7] Ammonia so far has not been detected on any TNO or icy satellite of the outer planets other than Miranda.[7] The 1.65 μm band on Orcus is broad and deep (12%), as on Charon, Quaoar, Haumea, and icy satellites of giant planets.[7] On the other hand the crystalline water ice on the surfaces of TNOs should be completely amorphized by the galactic and Solar radiation in about 10 million years.[7] Some calculations indicate that cryovolcanism, which is considered one of the possible renewal mechanisms, may indeed be possible for TNOs larger than about 1000 km.[15] Orcus may have experienced at least one such episode in the past, which turned the amorphous water ice on its surface into crystalline. The preferred type of volcanism may have been explosive aqueous volcanism driven by an explosive dissolution of methane from water–ammonia melts.[15]

Models of internal heating via radioactive decay suggest that Orcus may be capable of sustaining an internal ocean of liquid water.[20]

Using observations with the Hubble Space Telescope from November 13, 2005, Mike Brown and T.A. Suer detected a satellite.[21] The discovery of a satellite of Orcus was reported in IAUC 8812 on 22 February 2007.[22] The satellite was given the designation S/2005 (90482) 1 before later being named Vanth. It orbits Orcus in a nearly face-on circular orbit with an eccentricity less than 0.0036, and an orbital period of 9.53 days.[5] Vanth orbits only 8980 ± 20 km from Orcus and is too close to Orcus for ground-based spectroscopy to determine the surface composition of the satellite.[5] Mike Brown suspects that like the Pluto-Charon system, Orcus and Vanth are tidally locked.[13] Vanth does not resemble known collisional satellites because its spectrum is very different from that of its primary, and it may be a captured KBO.[13]

On March 23, 2009, Brown asked readers of his weekly column to suggest possible names for the satellite, with the best one to be submitted to the International Astronomical Union (IAU) on April 5.[13] The name Vanth, after the Etruscan goddess who guided the souls of the dead to the underworld, was eventually chosen from among a large pool of submissions.[16] This submission will be assessed by the IAU's Committee for Small Body Nomenclature, which will vote on whether to approve it, in accordance with the normal object naming procedures.[23]