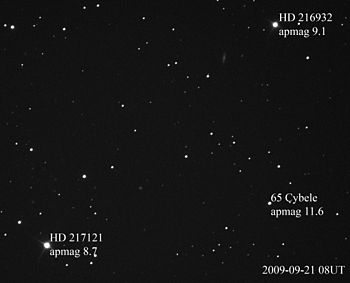 Asteroid 65 Cybele and 2 stars with their magnitudes labeled

The apparent magnitude (m) of a celestial body is a measure of its brightness as seen by an observer on Earth, normalized to the value it would have in the absence of the atmosphere. The brighter the object appears, the lower the value of its magnitude.

The scale now used to indicate magnitude originates in the Hellenistic practice of dividing stars visible to the naked eye into six magnitudes. The brightest stars were said to be of first magnitude (m = 1), while the faintest were of sixth magnitude (m = 6), the limit of human visual perception (without the aid of a telescope). Each grade of magnitude was considered twice the brightness of the following grade (a logarithmic scale). This somewhat crude method of indicating the brightness of stars was popularized by Ptolemy in his Almagest, and is generally believed to originate with Hipparchus. This original system did not measure the magnitude of the Sun. (For a more detailed discussion of the history of the magnitude system, see Magnitude.)

In 1856, Norman Robert Pogson formalized the system by defining a typical first magnitude star as a star that is 100 times as bright as a typical sixth magnitude star; thus, a first magnitude star is about 2.512 times as bright as a second magnitude star. The fifth root of 100 is known as Pogson's Ratio.[2] Pogson's scale was originally fixed by assigning Polaris a magnitude of 2. Astronomers later discovered that Polaris is slightly variable, so they first switched to Vega as the standard reference star, and then switched to using tabulated zero points[clarification needed] for the measured fluxes.[3] The magnitude depends on the wavelength band (see below).

The above are only approximate values at visible wavelengths (in reality the values depend on the precise bandpass used) — see airglow for more details of telescope sensitivity. 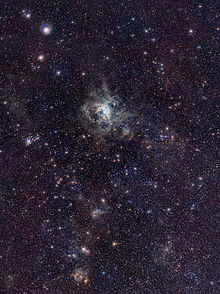 30 Doradus image taken by ESO's VISTA. This nebula has an apparent magnitude of 8.

The apparent magnitude, m, in the band, x, can be defined as mx below (noting that

is the observed flux in the band x, and

is a reference flux in the same band x, such as the Vega star's for example. See Aller et al. 1982 for the most commonly used system.

Since an increase of 1 in the magnitude scale corresponds to a decrease in brightness by a certain factor, the factor would be

The variation in brightness between two luminous objects can be calculated another way by subtracting the magnitude number of the brighter object from the magnitude number of the fainter object, then using the difference as an exponent for the base number 2.512; that is to say (mf − mb = x; and 2.512x = variation in brightness).

What is the ratio in brightness between the Sun and the full moon?

In terms of apparent magnitude, the Sun is about 398,359 times brighter than the full moon.

What is the ratio in brightness between Sirius and Polaris?

In terms of apparent magnitude, Sirius is 23.124 times brighter than Polaris the North Star.

The second thing to notice is that the scale is logarithmic: the relative brightness of two objects is determined by the difference of their magnitudes. For example, a difference of 3.2 means that one object is about 19 times as bright as the other, because Pogson's ratio raised to the power 3.2 is 19.054607... A common misconception is that the logarithmic nature of the scale is because the human eye itself has a logarithmic response. In Pogson's time this was thought to be true (see Weber-Fechner law), but it is now believed that the response is a power law (see Stevens' power law).[42]

Magnitude is complicated by the fact that light is not monochromatic. The sensitivity of a light detector varies according to the wavelength of the light, and the way it varies depends on the type of light detector. For this reason, it is necessary to specify how the magnitude is measured for the value to be meaningful. For this purpose the UBV system is widely used, in which the magnitude is measured in three different wavelength bands: U (centred at about 350 nm, in the near ultraviolet), B (about 435 nm, in the blue region) and V (about 555 nm, in the middle of the human visual range in daylight). The V band was chosen for spectral purposes and gives magnitudes closely corresponding to those seen by the light-adapted human eye, and when an apparent magnitude is given without any further qualification, it is usually the V magnitude that is meant, more or less the same as visual magnitude.

Since cooler stars, such as red giants and red dwarfs, emit little energy in the blue and UV regions of the spectrum their power is often under-represented by the UBV scale. Indeed, some L and T class stars have an estimated magnitude of well over 100, since they emit extremely little visible light, but are strongest in infrared.

Measures of magnitude need cautious treatment and it is extremely important to measure like with like. On early 20th century and older orthochromatic (blue-sensitive) photographic film, the relative brightnesses of the blue supergiant Rigel and the red supergiant Betelgeuse irregular variable star (at maximum) are reversed compared to what our eyes see since this archaic film is more sensitive to blue light than it is to red light. Magnitudes obtained from this method are known as photographic magnitudes, and are now considered obsolete.

For objects within our Galaxy with a given absolute magnitude, 5 is added to the apparent magnitude for every tenfold increase in the distance to the object. This relationship does not apply for objects at very great distances (far beyond our galaxy), since a correction for General Relativity must then be taken into account due to the non-Euclidean nature of space.

For planets and other Solar System bodies the apparent magnitude is derived from its phase curve and the distances to the Sun and observer.