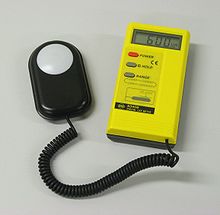 A lux meter for measuring illuminances in work places.

The lux (symbol: lx) is the SI unit of illuminance and luminous emittance measuring luminous power per area. It is used in photometry as a measure of the intensity, as perceived by the human eye, of light that hits or passes through a surface. It is analogous to the radiometric unit watts per square metre, but with the power at each wavelength weighted according to the luminosity function, a standardized model of human visual brightness perception. In English, "lux" is used in both singular and plural.[1]

One lux is equal to one lumen per square metre:

Achieving an illuminance of 500 lux might be possible in a home kitchen with a single fluorescent light fixture with an output of 12,000 lumens. To light a factory floor with dozens of times the area of the kitchen would require dozens of such fixtures. Thus, lighting a larger area to the same level of lux requires a greater number of lumens.

As with other SI units, SI prefixes can be used, for example a kilolux (klx) is 1,000 lux.

Unicode has a symbol for "lx": (㏓). It is a legacy code to accommodate old code pages in some Asian languages. Use of this code is not recommended.

Relationship between illuminance and irradiance

The lux is one lumen/metre2, and the corresponding radiometric unit, which measures irradiance, is the watt/metre2. There is no single conversion factor between lux and watt/metre2; there is a different conversion factor for every wavelength, and it is not possible to make a conversion unless one knows the spectral composition of the light.

For a light source with mixed wavelengths, the number of lumens per watt can be calculated by means of the luminosity function. In order to appear reasonably "white," a light source cannot consist solely of the green light to which the eye's visual photoreceptors are most sensitive, but must include a generous mixture of red and blue wavelengths to which they are much less sensitive.

Use in video camera specifications

Specifications for video cameras such as camcorders and surveillance cameras often include a minimum illuminance level in lux at which the camera will record a satisfactory image. A camera with good low-light capability will have a lower lux rating. Still cameras do not use such a specification, since longer exposure times can generally be used to make pictures at very low illuminance levels, as opposed to the case in video cameras where a maximum exposure time is generally set by the frame rate.

The corresponding unit in English and American traditional units is the foot-candle. One foot candle is about 10.764 lux. Since one foot-candle is the illuminance cast on a surface by a one-candela source one foot away., a lux could be thought of as a "metre-candle", although this term is discouraged because it does not conform to SI standards for unit names.