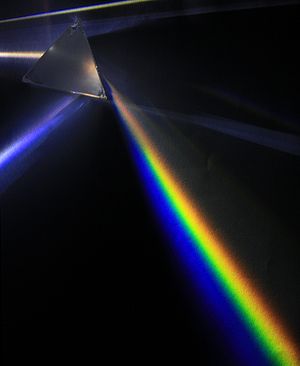 White light is dispersed by a prism into the colors of the optical spectrum.

The visible spectrum is the portion of the electromagnetic spectrum that is visible to (can be detected by) the human eye. Electromagnetic radiation in this range of wavelengths is called visible light or simply light. A typical human eye will respond to wavelengths from about 390 to 750 nm.[1] In terms of frequency, this corresponds to a band in the vicinity of 400–790 THz. A light-adapted eye generally has its maximum sensitivity at around 555 nm (540 THz), in the green region of the optical spectrum (see: luminosity function). The spectrum does not, however, contain all the colors that the human eyes and brain can distinguish. Unsaturated colors such as pink, or purple variations such as magenta, are absent, for example, because they can only be made by a mix of multiple wavelengths.

Visible wavelengths also pass through the "optical window", the region of the electromagnetic spectrum that passes largely unattenuated through the Earth's atmosphere. Clean air scatters blue light more than wavelengths toward the red, which is why the mid-day sky appears blue.

Many species can see light with frequencies outside the "visible spectrum," which is defined in terms of human vision. Bees and many other insects can see light in the ultraviolet, which helps them find nectar in flowers. Plant species that depend on insect pollination may owe reproductive success to their appearance in ultraviolet light, rather than how colorful they appear to humans. Birds, too, can see into the ultraviolet (300–400 nm), and some have sex-dependent markings on their plumage, which are only visible in the ultraviolet range.[2][3] 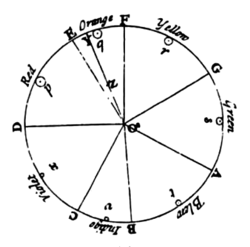 Newton's color circle, from Opticks of 1704, showing the colors correlated with musical notes. The spectral colors from red to violet are divided by the notes of the musical scale, starting at D. The circle completes a full octave, from D to D. Newton's circle places red, at one end of the spectrum, next to violet, at the other. This reflects the fact that non-spectral purple colors are observed when red and violet light are mixed.

An earliest reference to sunlight composed of seven components can be found in Surya Ashtaka hymns of Samba Purana which is a Vedic text in ancient India. Here the sun is identified as a lustrous chariot riding seven horses, white in color and highly radiant like a hibiscus flower[4] . The text belongs to Śruti tradition when the teachings were oral, hence true dating is unknown. The written portion can be dated to belong to the Vedic period which is around 1500 BC.

In 17th century the explanations of the optical spectrum came from Isaac Newton, when he wrote his book Opticks. In 18th century Goethe wrote about optical spectra in his Theory of Colours. Earlier observations had been made by Roger Bacon who recognized the visible spectrum in a glass of water, four centuries before Newton discovered that prisms could disassemble and reassemble white light.[5]

Newton first used the word spectrum (Latin for "appearance" or "apparition") in print in 1671 in describing his experiments in optics. The word "spectrum" [Spektrum] was strictly used to designate a ghostly optical afterimage by Goethe in his Theory of Colors and Schopenhauer in On Vision and Colors. Newton observed that when a narrow beam of sunlight strikes the face of a glass prism at an angle, some is reflected and some of the beam passes into and through the glass, emerging as different colored bands. Newton hypothesized that light was made up of "corpuscles" (particles) of different colors, and that the different colors of light moved at different speeds in transparent matter, with red light moving more quickly in glass than violet. The result is that red light bends (refracted) less sharply than violet as it passes through the prism, creating a spectrum of colors.

Newton divided the spectrum into seven named colors: red, orange, yellow, green, blue, indigo, and violet. (Often abbreviated ROY G. BIV) He chose seven colors out of a belief, derived from the ancient Greek sophists, that there was a connection between the colors, the musical notes, the known objects in the solar system, and the days of the week.[6][7] The human eye is relatively insensitive to indigo's frequencies, and some otherwise well-sighted people cannot distinguish indigo from blue and violet. For this reason some commentators, including Isaac Asimov, have suggested that indigo should not be regarded as a color in its own right but merely as a shade of blue or violet.

Johann Wolfgang von Goethe argued that the continuous spectrum was a compound phenomenon. Where Newton narrowed the beam of light to isolate the phenomenon, Goethe observed that a wider aperture produces not a spectrum, but rather reddish-yellow and blue-cyan edges with white between them. The spectrum only appears when these edges are close enough to overlap.

In the early 19th century, the concept of the visible spectrum became more definite, as light outside the visible range was discovered and characterized by William Herschel (infrared) and Johann Wilhelm Ritter (ultraviolet), Thomas Young, Thomas Johann Seebeck, and others.[8] Young was the first to measure the wavelengths of different colors of light, in 1802.[9]

The connection between the visible spectrum and color vision was explored by Thomas Young and Hermann von Helmholtz in the early 19th century. Their theory of color vision correctly proposed that the eye uses three distinct receptors to perceive color.

Colors that can be produced by visible light of a narrow band of wavelengths (monochromatic light) are called pure spectral colors. The various color ranges indicated in the diagram on the right are an approximation: the spectrum is continuous, with no clear boundaries between one color and the next.[10]

Spectroscopy is the study of objects based on the spectrum of color they emit or absorb. Spectroscopy is an important investigative tool in astronomy where scientists use it to analyze the properties of distant objects. Typically, astronomical spectroscopy uses high-dispersion diffraction gratings to observe spectra at very high spectral resolutions. Helium was first detected by analyzing the spectrum of the Sun. Chemical elements can be detected in astronomical objects by emission lines and absorption lines.

The shifting of spectral lines can be used to measure the Doppler shift (red shift or blue shift) of distant objects. The first exoplanets were discovered by analyzing the Doppler shift of the parent star which revealed variations in radial velocity, the star's speed relative to Earth, caused by the planet's gravitational influence.

Color spectrum of the complete RGB color wheel generated in a display device.

Color displays (e.g., computer monitors and televisions) mix red, green, and blue color to create colors within their respective color triangles, and so can only approximately represent spectral colors, which are in general outside any color triangle.

A render of the visible spectrum into the sRGB color space on a gray background.