Magenta is a color evoked by light stronger in blue and red wavelengths than in yellowish-green wavelengths (complements of magenta have wavelength 500–530 nm, i.e. green).[2] In light experiments, magenta can be produced by removing the lime-green wavelengths from white light. It is an extra-spectral color, meaning it cannot be generated by a single wavelength of light, being a mixture of red and blue wavelengths.[3] The name magenta comes from the dye magenta, commonly called fuchsine, discovered shortly after the 1859 Battle of Magenta (from the color of the land all covered by the blood) at Magenta, Lombardy (Italy) near Milan.[4]

In the Munsell color system, magenta is called red-purple. In the CMYK color model used in printing, it is one of the primary colors of ink. In the RGB color model, the secondary color created by mixing the red and blue primaries is called magenta or fuchsia, though this color differs in hue from printer’s magenta.

Before printer's magenta was invented in the 1890s for CMYK printing, this artificially engineered color was preceded by the color originally called fuchsine made from coal tar dyes in the year 1859. The name of the color was soon changed to magenta, being named after the Battle of Magenta fought at Magenta (due to the color of the land covered by the blood of the casualties of the battle), Lombardy-Italy.[5]

In color printing, the color called process magenta, or pigment magenta, or printer's magenta is one of the three primary pigment colors which, along with yellow and cyan, constitute the three subtractive primary colors of pigment (the secondary colors of pigment are blue, green, and red). As such, the hue magenta, is the complement of green: magenta pigments absorb green light; thus magenta and green are opposite colors.

The CMYK printing process was invented in the 1890s, when newspapers began to publish color comic strips.

Process magenta is not an RGB color, and there is no fixed conversion from CMYK primaries to RGB. Different formulations are used for printer's ink, so there can be variations in the printed color that is pure magenta ink. A typical formulation of process magenta is shown in the color box at right. The source of the color shown at right is the color magenta that is shown in the diagram located at the bottom of the following website offering tintbooks for CMYK printing: [2]. A printer’s magenta is usually out of gamut on a computer display, so the color at right is only an approximation.

Electric magenta, shown at the right, is one of the three secondary colors in the RGB color model. For computer color rendition, that specific hue of magenta composed of equal parts of red and blue light was termed the web color fuchsia and was assigned as an alias for the RGB code of magenta on a list of standardized web colors. "Electric" magenta and fuchsia are exactly the same color. Sometimes electric magenta is called electronic magenta.

While both of these colors are called magenta they are actually substantially different from one another. Process magenta (the color used for magenta printing ink is also called printer's or pigment magenta) is much less vivid than the color electric magenta achievable on a computer screen — indeed, CMYK printing technology cannot accurately reproduce pure magenta as described above as electric magenta (1/2 100% blue light + 1/2 100% red light=magenta) on paper.

When electric magenta is reproduced on paper, it is called fuchsia and it is physically impossible for it to appear on paper as vivid as on a computer screen. In order to reproduce it, a small amount of cyan printer's ink must be added to printer's magenta to make fuchsia, and therefore fuchsia is not a primary color of pigment — it is the color of printer's magenta that is one of the primary colors of pigment (along with cyan and yellow).

The name fuchsia was chosen as the alias for electric magenta because that is the color name for the color that in printed reproduction is its equivalent.

Since prior to the introduction of personal computers magenta was synonymous with printer's magenta, colored pencils and crayons called "magenta" are usually colored the color of process magenta (printer's magenta) shown above.

On the color wheel

If the visible spectrum is wrapped to form a color wheel, magenta (additive secondary) appears midway between red and blue: 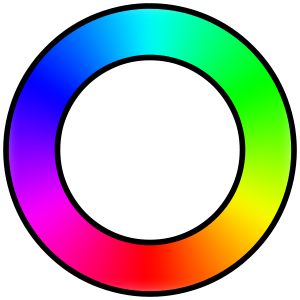 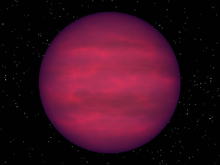