Non-ionizing (or non-ionising) radiation refers to any type of electromagnetic radiation that does not carry enough energy per quantum to ionize atoms or molecules—that is, to completely remove an electron from an atom or molecule.[1] Instead of producing charged ions when passing through matter, the electromagnetic radiation has sufficient energy only for excitation, the movement of an electron to a higher energy state. Nevertheless, different biological effects are observed for different types of non-ionizing radiation.[2][3]

Near ultraviolet, visible light, infrared, microwave, radio waves, and low-frequency RF (longwave) are all examples of non-ionizing radiation. Visible and near ultraviolet may induce photochemical reactions, ionize some molecules or accelerate radical reactions, such as photochemical aging of varnishes[4] or the breakdown of flavoring compounds in beer to produce the "lightstruck flavor".[5] The light from the Sun that reaches the earth is largely composed of non-ionizing radiation, with the notable exception of some ultraviolet rays. However, most ionizing radiation is filtered out by the Earth's atmosphere. Static fields do not radiate.[3] 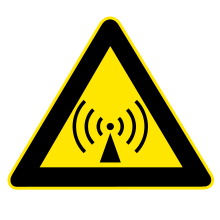 Non-ionizing radiation can produce non-mutagenic[citation needed] effects such as inciting thermal energy in biological tissue that can lead to burns.

In terms of potential biological effects, the non-ionizing portion of the spectrum can be subdivided into:

Ultraviolet light can cause burns to skin[6] and cataracts to the eyes.[6] Ultraviolet is classified into near, medium and far UV according to energy, where near ultraviolet is non-ionizing. Ultraviolet light produces free radicals that induce cellular damage, which can be carcinogenic. Ultraviolet light also induces melanin production from melanocyte cells to cause sun tanning of skin. Vitamin D is produced on the skin by a radical reaction initiated by UV radiation.

Plastic (polycarbonate) sunglasses generally absorb UV radiation. UV overexposure to the eyes causes snow blindness, which is a risk particularly on the sea or when there is snow on the ground.