In genetics, a mutagen (Latin, literally origin of change) is a physical or chemical agent that changes the genetic material, usually DNA, of an organism and thus increases the frequency of mutations above the natural background level. As many mutations cause cancer, mutagens are therefore also likely to be carcinogens. Not all mutations are caused by mutagens: so-called "spontaneous mutations" occur due to spontaneous hydrolysis, errors in DNA replication, repair and recombination.

The first mutagens to be identified were carcinogens, substances that were shown to be linked to cancer. Tumors were described more than 2,000 years before the discovery of chromosomes and DNA; in 500 B.C., the Greek physician Hippocrates named crab-shaped tumors karkinos (from which the word "cancer" is derived via Latin), meaning crab. In 1567, Swiss physician Paracelsus suggested unidentified substance in mined ore caused a wasting disease in miners, and in England, in 1761, John Hill made the first direct link of cancer to chemical substances by noting that excessive use of snuff may cause nasal cancer. In 1775, Dr. Percivall Pott wrote a paper on the high incidence of scrotal cancer in chimney sweeps, and suggested chimney soot as the cause of scrotal cancer.[1] In 1915, Yamagawa and Ichikawa showed that repeated application of coal tar to rabbit's ears produced malignant cancer.[2] Subsequently in the 1930s the carcinogen component in coal tar was identified as a polyaromatic hydrocarbon (PAH), benzo(a)pyrene.[3][4] Polyaromatic hydrocarbons are also present in soot, which was suggested to be a causative agent of cancer over 150 years earlier.

The mutagenic property of mutagens was first demonstrated in 1927, when Hermann Muller discovered that x-rays can cause genetic mutations in fruit flies, producing phenotypic mutants as well as observable changes to the chromosomes.[5] His collaborator Edgar Altenburg also demonstrated the mutational effect of UV radiation in 1928.[6] Muller went on to use x-rays to create Drosophila mutants that he used in his studies of genetics.[7] He also found that X-rays not only mutate genes in fruit flies but also have effects on the genetic makeup of humans.[8] Similar work by Lewis Stadler also showed the mutational effect of X-ray on barley in 1928,[9] and ultraviolet (UV) radiation on maize in 1936.[10] The effect of sunlight had previously been noted in the nineteenth century where rural outdoor workers and sailors were more prone to skin cancer.[11]

Chemical mutagens were not demonstrated to cause mutation until the 1940s, when Charlotte Auerbach and J. M. Robson, found that mustard gas can cause mutations in fruit flies.[12] A large number of chemical mutagens have since been identified, especially after the development of the Ames test in 1970s by Bruce Ames that screens for mutagens and allows for preliminary identification of carcinogens.[13][14] Early studies by Ames showed around 90% of known carcinogens can be identified in Ames test as mutagenic,[15] and 80% of the mutagens identified through Ames test are also carcinogens. Mutagens are not necessarily carcinogens, and vice versa. Sodium Azide for example may be mutagenic (and highly toxic), but it has not been shown to be carcinogenic.[16]

Mutagen causes changes to the DNA that can affect the transcription and replication of the DNA, which in severe cases can lead to cell death. The mutagen produces mutations in the DNA, and deleterious mutation can result in aberrant, impaired or loss of function for a particular gene, and accumulation of mutations may lead to cancer.

Different mutagens act on the DNA differently. Powerful mutagens may result in chromosomal instability,[17] causing chromosomal breakages and rearrangement of the chromosomes such as translocation, deletion, and inversion. Such mutagens are called clastogens.

Mutagens may also modified the DNA sequence, the changes in nucleic acid sequences by mutations include substitution of nucleotide base-pairs and insertions and deletions of one or more nucleotides in DNA sequences. Although some of these mutations are lethal or can cause serious disease, many have minor effects as they do not result in residue changes that have significant effect on the structure and function of the proteins. Many mutations are silent mutations, causing no visible effects at all, either because they occur in non-coding or non-functional sequences, or they do not change the amino-acid sequence due to the redundancy of codons.

Some mutagens can cause aneuploidy and polyploidy due to loss or gain of one or more chromosomes.

In Ames test, where the varying concentrations of the chemical are used in the test, the dose response curve obtained is nearly always linear, suggesting that there is no threshold for mutagenesis. Similar results are also obtained in studies with radiations, indicating that there may be no safe threshold for mutagens. However, some proposed that low level of some mutagens may stimulate the DNA repair processes and therefore may not necessarily be harmful.

Mutagens may be of physical, chemical or biological origin. They may act directly on the DNA, causing direct damage to the DNA, and most often result in replication error. Some however may act on the replication mechanism and chromosomal partition. Many mutagens are not mutagenic by themselves, but can form mutagenic metabolites through cellular processes. Such mutagens are called promutagens.

A large number of chemicals may interact directly with DNA. However, many such as PAHs, aromatic amines, benzene are not necessarily mutagenic by themselves, but through metabolic processes in cells they produce mutagenic compounds.

Many metals, such as Arsenic, cadmium, chromium, nickel and their compounds may be mutagenic, they may however act via different mechanisms.[18] Arsenic, chromium, iron, and nickel may be associated with the production of reactive oxygen species, nickel may also be linked to DNA hypermethylation and histone deacetylation, while cadmium may inhibit DNA mismatch repair. 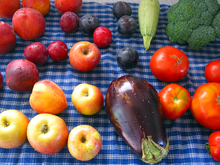 Fruits and vegetable are rich in antioxidants.

Antioxidants are important groups of compounds that may help remove ROS or potentially harmful chemicals. These may be found naturally in fruits and vegetables.[19] Example of antioxidants are vitamin A and its carotenoid precursors, vitamin C, vitamin E, polyphenols, and various other compounds. β-Carotene, the red-orange colored compounds found in carrots, tomatoes and other fruits and vegetables have been shown to be effective in cancer prevention. Vitamin C may prevent various cancers by inhibiting the formation of mutagenic N-nitroso compounds (nitrosamine). Flavonoids such as EGCG in in green tea have also been shown to be effective antioxidants.

Other chemicals may reduce mutagenesis via other mechanisms, although the precise mechanism for their protective property may not be certain. Selenium, which is present as a micronutrient in vegetable, is a component of selenoproteins, which are important antioxidant enzymes such as gluthathione peroxidase. Sulforaphane in vegetables such as broccoli has been shown to be protective against prostate cancer.

An effective precautionary measure an individual can undertake to protect themselves is by limiting exposure to mutagens such as UV radiations and tobacco smoke. In Australia where people with pale skin are often exposed to strong sunlight, melanoma is the most common cancer diagnosed in people aged 15-44 years.[20][21] In 1981, human epidemiological analysis by Richard Doll and Richard Peto indicated that smoking caused 30% of cancers in the US.[22] Doll and Peto also estimated that diet may cause perhaps around 35% of cancers. Mutagens identified in food include mycotoxins from food contaminated with fungal growths, such as aflatoxins, which may be present in contaminated peanuts (prevalent in Southern China) and corn, heterocyclic amines generated in meat when cooked at high temperature, PAHs in charred meat and smoked fish, and nitrosamines generated from nitrites used as food preservatives in cured meat such as bacon (ascobate, which is added to cured meat, however, reduces nitrosamine formation).[19]

For certain mutagens, government legislations and regulatory bodies are necessary for their control, such as dangerous chemicals and radiations, as well as infectious agents known to cause cancer.

Many different systems for detecting mutagen have been developed.[23][24] Animal systems may more accurately reflect the metabolism of human, however, they are expensive and time-consuming (may take around three years to complete), they are therefore not used as a first screen for mutagenicity or carcinogenicity.

Systems similar to Ames test have been developed in yeast. Saccharomyces cerevisiae is general used. These systems can check for forward and reverse mutations, as well as recombinant events.

Sex-Linked Recessive Lethal Test - Males from a strain with yellow bodies are used in this test. The gene for the yellow body lies on the X-chromosome. The fruit flies are fed on a diet of test chemical, and progenies are separated by sex. The surviving males are crossed with the females of the same generation, and if no males with yellow bodies are detected in the second generation, it would indicate a lethal mutation on the X-chromosome has occurred.

Plants such as Zea maize, Arabidopsis and Tradescantia have been used in various test assays for mutagenecity of chemicals.

Mammalian cell lines such as Chinese hamster V79 cells, Chinese hampter ovary (CHO) cells or mouse lymphoma cells may be used to test for mutagenesis. Such systems include the HPRT assay for resistance to 8-azaguanine or 6-thioguanine, and ouabain-resistance (OUA) assay.

These systems check for large scale changes to the chromosomes and may be used with cell culture or in animal test. The chromosomes are stained and observed for any changes. Sister chromatid exchange is a symmetrical exchange of chromosome material between sister chromatids and may be correlated to the mutagenic or carcinogenic potential of a chemical. In micronucleus Test, cells are examined for micronuclei, which are fragments or chromosomes left behind at anaphase, and is therefore a test for clastogenic agents that cause chromosome breakages. Other tests may check for various chromosomal aberrations such as chromatid and chromosomal gaps and deletions, translocations, and ploidy.

Rodents are usually used for test. The chemicals under test are usually administered in the food and in the drinking water, but sometimes by dermal application, by gavage, or by inhalation, and carried out over the major part of the life span for rodents. In tests that check for carcinogens, maximum tolerated dosage is first determined, then a range of doses are given to around 50 animals throughout the notional lifespan of the animal of two years. After death the animals are examined for sign of tumours. Differences in metabolism between rat and human however means that human may not respond in exactly the same way to mutagen, and dosages that produce tumors on the animal test may also be unreasonably high for a human, i.e. the equivalent amount required to produce tumors in human may far exceed what a person might encounter in real life.

Mice may also be used for dominant lethal assays where early embryonic deaths are monitored. Male mice are treated with chemicals under test, mated with females, and the females are then sacrificed before parturition and early fetal deaths are counted in the uterine horns.

Transgenic Mouse Assay using a mouse strain infected with a viral shuttle vector is another method for testing mutagens. Animals are first treated with suspected mutagen, the mouse DNA is then isolated and the phage segment recovered and used to infect E. coli. Using similar method as the blue-white screen, the plaque formed with DNA containing mutation are white, while those without are blue.

Use of mutagen in anti-cancer therapy

Many mutagens are highly toxic to proliferating cells, and they are often used to destroy cancer cells. Alkylating agents such as cyclophosphamide and cisplatin, as well as intercalating agent such as daunorubicin and doxorubicin may be used in chemotherapy. Ionizing radiations are used in radiation therapy.

In science fiction, mutagens are often represented as substances that are capable of completely changing the form of the recipient. This is seen in the Teenage Mutant Ninja Turtle franchise, comic books such as Marvel Comics's Inhumans, television series, computer and video games, like the The Witcher, Metroid Prime Trilogy, Resistance: Fall of Man, Resident Evil, Infamous, and Command & Conquer, and even toys.