Chelation therapy is the administration of chelating agents to remove heavy metals from the body. For the most common forms of heavy metal intoxication—those involving lead, arsenic or mercury—the standard of care in the United States dictates the use of dimercaptosuccinic acid (DMSA).[citation needed] Other chelating agents, such as 2,3-dimercapto-1-propanesulfonic acid (DMPS) and alpha lipoic acid (ALA), are used in conventional and alternative medicine. No approved medical research has found any benefits to chelation therapy for other diseases or ailments.[1] [2]

Chelating agents were introduced into medicine as a result of the use of poison gas in World War I. The first widely used chelating agent, the organic dithiol compound dimercaprol (also named British anti-lewisite or BAL), was used as an antidote to the arsenic-based poison gas, lewisite. The sulphur atoms in BAL's mercaptan groups strongly bond to the arsenic in lewisite, forming a water-soluble compound that entered the bloodstream, allowing it to be removed from the body by the kidneys and liver. BAL had severe side-effects.

After World War II, a large number of navy personnel suffered from lead poisoning as a result of their jobs repainting the hulls of ships. The medical use of ethylenediaminetetraacetic acid (EDTA) as a lead chelating agent was introduced. Unlike BAL, it is a synthetic amino acid and contains no mercaptans. EDTA side effects were not considered as severe as BAL.

In the 1960s, BAL was modified into DMSA, a related dithiol with far fewer side effects.[3] DMSA quickly replaced both BAL and EDTA, becoming the US standard of care for the treatment of lead, arsenic, and mercury poisoning, which it remains today. More recently, esters of DMSA have been developed which are reportedly more effective; for example, the monoisoamyl ester (MiADMSA) is reportedly more effective than DMSA at clearing mercury and cadmium.[3]

Research in the former Soviet Union led to the introduction of DMPS, another dithiol, as a mercury-chelating agent. The Soviets also introduced ALA, which is transformed by the body into the dithiol dihydrolipoic acid, a mercury- and arsenic-chelating agent. DMPS has experimental status in the US FDA, while ALA is a common nutritional supplement.

Since the 1970s, iron chelation therapy has been used as an alternative to regular phlebotomy to treat excess iron stores in people with haemochromatosis.[4]

Other chelating agents have been discovered. They all function by making several chemical bonds with metal ions, thus rendering them much less chemically reactive. The resulting complex is water-soluble, allowing it to enter the bloodstream and be excreted harmlessly.

Calcium-disodium EDTA chelation is approved by the U.S. Food and Drug Administration (FDA) for treating lead poisoning and heavy metal toxicity.[5] In 1998, the U.S. Federal Trade Commission (FTC) pursued the American College for Advancement in Medicine (ACAM), an organization that promotes "complementary, alternative and integrative medicine" over the claims made regarding the treatment of atherosclerosis in advertisements for EDTA chelation therapy. The FTC concluded that there was a lack of scientific studies to support these claims and that the statements by the ACAM were false.[6] In 1999, the ACAM agreed to stop misrepresenting chelation therapy as effective in treating heart disease, avoiding legal proceedings.[7] 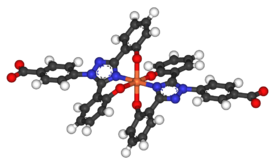 Two molecules of deferasirox, an orally administered chelator, binding iron. Deferasirox is used in the treatment of transfusional iron overload in people with thalassemia.

Chelation therapy is used as a treatment for acute mercury, iron (including in cases of thalassemia), arsenic, lead, uranium, plutonium and other forms of toxic metal poisoning. The chelating agent may be administered intravenously, intramuscularly, or orally, depending on the agent and the type of poisoning.[8]

One example of successful chelation therapy is the case of Harold McCluskey, a nuclear worker who became badly contaminated with americium in 1976. He was treated with diethylene triamine pentaacetic acid (DTPA) over many years, removing 41 MBq (1.1 mCi) of americium from his body. His death, 11 years later, was from unrelated causes.

Some common chelating agents are EDTA (ethylenediaminetetraacetic acid), DMPS (2,3-dimercaptopropanesulfonic acid), TTFD (thiamine tetrahydrofurfuryl disulfide), and DMSA (2,3-dimercaptosuccinic acid). Calcium-disodium EDTA and DMSA are only approved for the removal of lead by the Food and Drug Administration while DMPS and TTFD are not approved by the FDA. These drugs bind to heavy metals in the body and prevent them from binding to other agents. They are then excreted from the body. The chelating process also removes vital nutrients such as vitamins C and E, therefore these must be supplemented.[10]

Use in alternative medicine

Alternative medicine uses chelation therapy as a non-standard treatment for some ailments, including heart disease and autism.[11][12] Attempts have been made to use it in treating kidney dysfunction, calcific band keratopathy (an eye disorder), and ovarian cancer. Currently there is a US National Center for Complementary and Alternative Medicine (NCCAM) trial being conducted on the chelation therapy's safety and efficacy for patients with coronary artery disease.[13] NCCAM Director Stephen E. Straus cited the "widespread use of chelation therapy in lieu of established therapies, the lack of adequate prior research to verify its safety and effectiveness, and the overall impact of coronary artery disease" as factors motivating the trial.[14] The proposed study has been criticized as unethical, unnecessary and dangerous, with multiple studies conducted in the past demonstrating that it provides no benefits.[15]

Some alternative medicine practitioners[who?] administer chelating agents, usually EDTA, to patients with atherosclerosis. The use of EDTA chelation therapy as a treatment for coronary artery disease has not been shown to be effective and is not approved by the U.S. Food and Drug Administration (FDA).[1] Several possible mechanisms have been proposed, though none have been scientifically validated. The US National Center for Complementary and Alternative Medicine began conducting the Trial to Assess Chelation Therapy (TACT) in 2003.[13] Patient enrollment was to be completed around July 2009[5] with final completion around July 2010,[16] but enrollment in the trial was suspended on September 26, 2008 for an investigation by OHRP after complaints about ethical concerns such as inadequate informed consent.[17] The trial has been criticized for lacking prior Phase I and II studies, and particularly because previous controlled trials have not indicated benefits.[15] The American College for Advancement in Medicine, a controversial organization created to promote chelation therapy, has played a part in the adoption of the TACT clinical trial, which has led to further criticism of the trial.[15] Atwood et al. have argued that methodological flaws and lack of prior probability make this trial "unethical, dangerous, pointless, and wasteful."[15]

The American Heart Association states that there is "no scientific evidence to demonstrate any benefit from this form of therapy" and that the "United States Food and Drug Administration (FDA), the National Institutes of Health (NIH) and the American College of Cardiology all agree with the American Heart Association" that "there have been no adequate, controlled, published scientific studies using currently approved scientific methodology to support this therapy for cardiovascular disease."[1] Like other scientific commentators, they note that any improvement among heart patients undergoing chelation therapy can be attributed to the placebo effect and lifestyle changes discovered in conventional medicine but recommended by chelationists; "quitting smoking, losing weight, eating more fruits and vegetables, avoiding foods high in saturated fats and exercising regularly".[18] They note their concern that patients could put off proven treatments for heart disease like drugs or surgery.[18] A 2005 systematic review found that controlled scientific studies did not support chelation therapy for heart disease.[19] It found that very small trials and uncontrolled descriptive studies have reported benefits while larger controlled studies have found results no better than placebo. The Mayo Clinic states that 'chelation studies have found that chelation didn't work as a heart disease treatment.'[20]

Based on the discredited hypothesis that mercury poisoning may trigger the symptoms of autism,[21] chelation therapy is widely used by alternative therapists to treat autism, with some surveys[citation needed] suggesting 2–8% of children with autism have had the therapy. Parents either have a doctor use a treatment for lead poisoning, or buy unregulated supplements.[22] Aspies For Freedom, an autistic rights organization, considers this use of chelation therapy unethical and potentially dangerous.[2] There is strong epidemiological evidence that refutes links between environmental triggers, in particular thiomersal-containing vaccines, and the onset of autistic symptoms.[23][24][25][26] There is no scientific support for chelation therapy as a treatment for autism.[12][27]

The efficacy, safety, and much of the theory behind these alternative practices are disputed by the medical community. In 2001, researchers at the University of Calgary reported that cardiac patients receiving chelation therapy fared no better than those who received placebo treatment.[28]

In 1998, the U.S. Federal Trade Commission (FTC) charged that the web site of the American College for Advancement in Medicine (ACAM) and a brochure they published had made false or unsubstantiated claims. In December 1998, the FTC announced that it had secured a consent agreement barring ACAM from making unsubstantiated advertising claims that chelation therapy is effective against atherosclerosis or any other disease of the circulatory system.[29][30]

The use of chelation therapy by alternative medicine practitioners for behavioural and other disorders is considered pseudoscientific as there is no proof that it is effective.[31]

The American College for Advancement in Medicine estimates that 800,000 patient visits for chelation therapy were made in the United States in 1997.[32]

Side effects and safety concerns

There is a low occurrence of side effects when chelation is used at the dose and infusion rates approved by the U.S. FDA as a treatment for heavy metal poisoning[citation needed]. A burning sensation at the site of delivery into the vein is common. Other side effects include fever, headache, nausea, stomach upset, vomiting, convulsions, bone marrow depression, hypotension, cardiac arrhythmias, respiratory arrest, and hypocalcemia. Other concerns include kidney failure, which can require permanent life-limiting and expensive dialysis, or cause death.[18]

When EDTA is not administered by a health professional for the treatment of heavy metal poisoning more serious side effects can occur.[5]

More than 30 deaths have been recorded in association with IV-administered disodium EDTA since the 1970s.[15]