/əˈniːmiə/; also spelled anaemia and anæmia; from Greek ἀναιμία anaimia, meaning lack of blood) is a decrease in number of red blood cells (RBCs) or less than the normal quantity of hemoglobin in the blood.[1][2] However, it can include decreased oxygen-binding ability of each hemoglobin molecule due to deformity or lack in numerical development as in some other types of hemoglobin deficiency.

Because hemoglobin (found inside RBCs) normally carries oxygen from the lungs to the tissues, anemia leads to hypoxia (lack of oxygen) in organs. Because all human cells depend on oxygen for survival, varying degrees of anemia can have a wide range of clinical consequences.

Anemia is the most common disorder of the blood. There are several kinds of anemia, produced by a variety of underlying causes. Anemia can be classified in a variety of ways, based on the morphology of RBCs, underlying etiologic mechanisms, and discernible clinical spectra, to mention a few. The three main classes of anemia include excessive blood loss (acutely such as a hemorrhage or chronically through low-volume loss), excessive blood cell destruction (hemolysis) or deficient red blood cell production (ineffective hematopoiesis).

There are two major approaches: the "kinetic" approach which involves evaluating production, destruction and loss,[3] and the "morphologic" approach which groups anemia by red blood cell size. The morphologic approach uses a quickly available and low cost lab test as its starting point (the MCV). On the other hand, focusing early on the question of production may allow the clinician to expose cases more rapidly where multiple causes of anemia coexist. 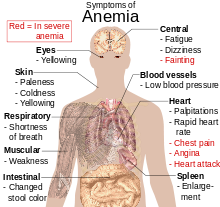 Main symptoms that may appear in anemia.[4]

Most commonly, people with anemia report non-specific symptoms of a feeling of weakness, or fatigue, general malaise and sometimes poor concentration. They may also report dyspnea (shortness of breath) on exertion. In very severe anemia, the body may compensate for the lack of oxygen-carrying capability of the blood by increasing cardiac output. The patient may have symptoms related to this, such as palpitations, angina (if preexisting heart disease is present), intermittent claudication of the legs, and symptoms of heart failure.

On examination, the signs exhibited may include pallor (pale skin, mucosal linings and nail beds) but this is not a reliable sign. There may be signs of specific causes of anemia, e.g., koilonychia (in iron deficiency), jaundice (when anemia results from abnormal break down of red blood cells — in hemolytic anemia), bone deformities (found in thalassemia major) or leg ulcers (seen in sickle-cell disease).

Pica, the consumption of non-food based items such as dirt, paper, wax, grass, ice, and hair, may be a symptom of iron deficiency, although it occurs often in those who have normal levels of hemoglobin.

Chronic anemia may result in behavioral disturbances in children as a direct result of impaired neurological development in infants, and reduced scholastic performance in children of school age.

Restless legs syndrome is more common in those with iron-deficiency anemia.

Less common symptoms may include swelling of the legs or arms, chronic heartburn, vague bruises, vomiting, increased sweating, and blood in stool. 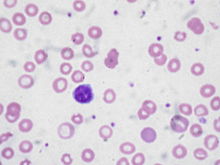 Peripheral blood smear microscopy of a patient with iron-deficiency anemia.

Anemia is typically diagnosed on a complete blood count. Apart from reporting the number of red blood cells and the hemoglobin level, the automatic counters also measure the size of the red blood cells by flow cytometry, which is an important tool in distinguishing between the causes of anemia. Examination of a stained blood smear using a microscope can also be helpful, and is sometimes a necessity in regions of the world where automated analysis is less accessible.

In modern counters, four parameters (RBC count, hemoglobin concentration, MCV and RDW) are measured, allowing others (hematocrit, MCH and MCHC) to be calculated, and compared to values adjusted for age and sex. Some counters estimate hematocrit from direct measurements.

If an automated count is not available, a reticulocyte count can be done manually following special staining of the blood film. In manual examination, activity of the bone marrow can also be gauged qualitatively by subtle changes in the numbers and the morphology of young RBCs by examination under a microscope. Newly formed RBCs are usually slightly larger than older RBCs and show polychromasia. Even where the source of blood loss is obvious, evaluation of erythropoiesis can help assess whether the bone marrow will be able to compensate for the loss, and at what rate.

When the diagnosis remains difficult, a bone marrow examination allows direct examination of the precursors to red cells.

Production vs. destruction or loss

The "kinetic" approach to anemia yields what many argue is the most clinically relevant classification of anemia. This classification depends on evaluation of several hematological parameters, particularly the blood reticulocyte (precursor of mature RBCs) count. This then yields the classification of defects by decreased RBC production versus increased RBC destruction and/or loss. Clinical signs of loss or destruction include abnormal peripheral blood smear with signs of hemolysis; elevated LDH suggesting cell destruction; or clinical signs of bleeding, such as guaiac-positive stool, radiographic findings, or frank bleeding.

The following is a simplified schematic of this approach:

* For instance, sickle cell anemia with superimposed iron deficiency; chronic gastric bleeding with B12 and folate deficiency; and other instances of anemia with more than one cause.
** Confirm by repeating reticulocyte count: ongoing combination of low reticulocyte production index, normal MCV and hemolysis or loss may be seen in bone marrow failure or anemia of chronic disease, with superimposed or related hemolysis or blood loss.

In the morphological approach, anemia is classified by the size of red blood cells; this is either done automatically or on microscopic examination of a peripheral blood smear. The size is reflected in the mean corpuscular volume (MCV). If the cells are smaller than normal (under 80 fl), the anemia is said to be microcytic; if they are normal size (80–100 fl), normocytic; and if they are larger than normal (over 100 fl), the anemia is classified as macrocytic. This scheme quickly exposes some of the most common causes of anemia; for instance, a microcytic anemia is often the result of iron deficiency. In clinical workup, the MCV will be one of the first pieces of information available; so even among clinicians who consider the "kinetic" approach more useful philosophically, morphology will remain an important element of classification and diagnosis.

Here is a schematic representation of how to consider anemia with MCV as the starting point:

Other characteristics visible on the peripheral smear may provide valuable clues about a more specific diagnosis; for example, abnormal white blood cells may point to a cause in the bone marrow.

Microcytic anemia is primarily a result of hemoglobin synthesis failure/insufficiency, which could be caused by several etiologies:

Iron deficiency anemia is the most common type of anemia overall and it has many causes. RBCs often appear hypochromic (paler than usual) and microcytic (smaller than usual) when viewed with a microscope.

In addition to the non-specific symptoms of anemia, specific features of vitamin B12 deficiency include peripheral neuropathy and subacute combined degeneration of the cord with resulting balance difficulties from posterior column spinal cord pathology.[10] Other features may include a smooth, red tongue and glossitis.

The treatment for vitamin B12-deficient anemia was first devised by William Murphy who bled dogs to make them anemic and then fed them various substances to see what (if anything) would make them healthy again. He discovered that ingesting large amounts of liver seemed to cure the disease. George Minot and George Whipple then set about to isolate the curative substance chemically and ultimately were able to isolate the vitamin B12 from the liver. All three shared the 1934 Nobel Prize in Medicine.[11]

When two or more causes of anemia act simultaneously, e.g., macrocytic hypochromic, due to hookworm infestation leading to deficiency of both iron and vitamin B12 or folic acid [12] or following a blood transfusion more than one abnormality of red cell indices may be seen. Evidence for multiple causes appears with an elevated RBC distribution width (RDW), which suggests a wider-than-normal range of red cell sizes.

Heinz bodies form in the cytoplasm of RBCs and appear like small dark dots under the microscope. There are many causes of Heinz body anemia, and some forms can be drug induced. It is triggered in cats by eating onions[13] or acetaminophen (paracetamol). It can be triggered in dogs by ingesting onions or zinc, and in horses by ingesting dry red maple leaves.

Hyperanemia is a severe form of anemia, in which the hematocrit is below 10%.

Refractory anemia is an anemia which does not respond to treatment.[14] It is often seen secondary to myelodysplastic syndromes.[15]

Iron deficiency anemia may also be refractory as a clinical manifestation of gastrointestinal problems which disrupt iron metabolism. [16]

Broadly, causes of anemia may be classified as impaired red blood cell (RBC) production, increased RBC destruction (hemolytic anemias), blood loss and fluid overload (hypervolemia). Several of these may interplay to cause anemia eventually. Indeed, the most common cause of anemia is blood loss, but this usually doesn't cause any lasting symptoms unless a relatively impaired RBC production develops, in turn most commonly by iron deficiency.[17] (See Iron deficiency anemia)

Treatments for anemia depend on severity and cause.

Iron deficiency from nutritional causes is rare in men and post-menopausal women. The diagnosis of iron deficiency mandates a search for potential sources of loss such as gastrointestinal bleeding from ulcers or colon cancer. Mild to moderate iron-deficiency anemia is treated by oral iron supplementation with ferrous sulfate, ferrous fumarate, or ferrous gluconate. When taking iron supplements, it is very common to experience stomach upset and/or darkening of the feces. The stomach upset can be alleviated by taking the iron with food; however, this decreases the amount of iron absorbed. Vitamin C aids in the body's ability to absorb iron, so taking oral iron supplements with orange juice is of benefit.

In severe cases of anemia, or with ongoing blood loss, a blood transfusion may be necessary.

In severe, acute bleeding, transfusions of donated blood are often lifesaving. Improvements in battlefield casualty survival is attributable, at least in part, to the recent improvements in blood banking and transfusion techniques.[citation needed]

Transfusion of the stable but anemic hospitalized patient has been the subject of numerous clinical trials.

Treatment of exceptional blood loss (anemia) is recognized as an indication for hyperbaric oxygen (HBO) by the Undersea and Hyperbaric Medical Society.[30][31] The use of HBO is indicated when oxygen delivery to tissue is not sufficient in patients who cannot be transfused for medical or religious reasons. HBO may be used for medical reasons when threat of blood product incompatibility or concern for transmissible disease are factors.[30] The beliefs of some religions (ex: Jehovah's Witnesses) may require they use the HBO method.[30]

In 2002, Van Meter reviewed the publications surrounding the use of HBO in severe anemia and found that all publications report a positive result.[32]