Components of the procedure 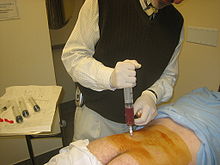 Bone marrow samples can be obtained by aspiration and trephine biopsy. Sometimes, a bone marrow examination will include both an aspirate and a biopsy. The aspirate yields semi-liquid bone marrow, which can be examined by a pathologist under a light microscope as well as analyzed by flow cytometry, chromosome analysis, or polymerase chain reaction (PCR). Frequently, a trephine biopsy is also obtained, which yields a narrow, cylindrically shaped solid piece of bone marrow, 2mm wide and 2 cm long (80 μL), which is examined microscopically (sometimes with the aid of immunohistochemistry) for cellularity and infiltrative processes. An aspiration, using a 20 mL syringe, yields approximately 300 μL of bone marrow.[1] A volume greater than 300 μL is not recommended, since it may dilute the sample with peripheral blood.[1]

Aspiration doesn't always represent all cells since, as some such as lymphoma stick to the trabecula, and would thus be missed by a simple aspiration.

How the test is performed

A needle used for bone marrow aspiration, with removable stylet.

A bone marrow biopsy may be done in a health care provider's office or in a hospital. Informed consent for the procedure is typically required. The patient is asked to lie on his or her abdomen (prone position) or on his/her side (lateral decubitus position). The skin is cleansed, and a local anesthetic such as lidocaine is injected to numb the area. Patients may also be pretreated with analgesics and/or anti-anxiety medications, although this is not a routine practice.

Typically, the aspirate is performed first. An aspirate needle is inserted through the skin using manual pressure and force until it abuts the bone. Then, with a twisting motion of clinician's hand and wrist, the needle is advanced through the bony cortex (the hard outer layer of the bone) and into the marrow cavity. Once the needle is in the marrow cavity, a syringe is attached and used to aspirate ("suck out") liquid bone marrow. A twisting motion is performed during the aspiration to avoid excess content of blood in the sample, which might be the case if an excessively large sample from one single point is taken.

Subsequently, the biopsy is performed if indicated. A different, larger trephine needle is inserted and anchored in the bony cortex. The needle is then advanced with a twisting motion and rotated to obtain a solid piece of bone marrow. This piece is then removed along with the needle. The entire procedure, once preparation is complete, typically takes 10–15 minutes.

If several samples are taken, the needle is removed between the samples to avoid blood coagulation.

In March of 2010, Vidacare Corporation introduced a new technology to facilitate faster and easier insertion when compared to manual insertions with comparable or better core sample quality.[2][3][4] The OnControl™ Bone Marrow Biopsy and Aspiration System provides the first advance in bone marrow biopsy and aspiration procedures in over 50 years by combining a specially designed needle with a powered driver to obtain high quality core samples.Validation testing completed prior to the product’s launch on the OnControl™ System showed the following results[5]:

In addition, an article dated April 19, 2010 published in the Journal of Clinical Pathology (Swords, Ronan, et al.)[6] made the following conclusion about the System: “As clinicians, we feel that the speed and ease of use of this new powered system could change the way that bone marrow aspiration and biopsy is carried out in the future, particularly in large centres where this procedure is commonly performed.”