Lidocaine, the first amino amide-type local anesthetic, was first synthesized under the name Xylocaine by Swedish chemist Nils Löfgren in 1943.[1] His colleague Bengt Lundqvist performed the first injection anesthesia experiments on himself.[1] It was first marketed in 1949. Etymology: from one of its many chemical names - [alpha-Diethylamino-2,6-dimethylacetani- ] - lide + ~ocaine.

The efficacy profile of lidocaine as a local anesthetic is characterized by a rapid onset of action and intermediate duration of efficacy. Therefore, lidocaine is suitable for infiltration, block and surface anesthesia. Longer-acting substances such as bupivacaine are sometimes given preference for spinal and peridural anesthesias; lidocaine, on the other hand, has the advantage of a rapid onset of action. Adrenaline vasoconstricts arteries and hence delays the resorption of Lidocaine, almost doubling the duration of anaesthesia. For surface anesthesia several formulations are available that can be used e.g. for endoscopies, before intubations etc. Buffering the pH of lidocaine makes local freezing less painful.[2]

Topical lidocaine has been shown to relieve postherpetic neuralgia (arising, for example, from shingles) in some patients, though there is not enough study evidence to recommend it as a first-line treatment.[3] It also has uses as a temporary fix for tinnitus. Although not completely curing the illness, it has been shown to reduce the effects by around two thirds.[4]

Lidocaine is also the most important class 1B antiarrhythmic drug: it is used intravenously for the treatment of ventricular arrhythmias (for acute myocardial infarction, digitalis poisoning, cardioversion or cardiac catheterization). However, a routine prophylactic administration is no longer recommended for acute cardiac infarction; the overall benefit of this measure is not convincing.

Lidocaine has also been efficient in refractory cases of status epilepticus.

Inhaled lidocaine can be used as an antitussive (cough suppressor) acting peripherally below the larynx.[5] [6]

Contraindications for the use of lidocaine include:

Adverse drug reactions (ADRs) are rare when lidocaine is used as a local anesthetic and is administered correctly. Most ADRs associated with lidocaine for anesthesia relate to administration technique (resulting in systemic exposure) or pharmacological effects of anesthesia, but allergic reactions only rarely occur.[10]

ADRs associated with the use of intravenous lidocaine are similar to toxic effects from systemic exposure above. These are dose-related and more frequent at high infusion rates (≥3 mg/minute). Common ADRs include: headache, dizziness, drowsiness, confusion, visual disturbances, tinnitus, tremor, and/or paraesthesia. Infrequent ADRs associated with the use of lidocaine include: hypotension, bradycardia, arrhythmias, cardiac arrest, muscle twitching, seizures, coma, and/or respiratory depression.[11]

Overdosage with lidocaine can be a result of excessive administration via topical or parenteral routes, accidental oral ingestion of topical preparations by children, accidental intravenous (rather than subcutaneous, intrathecal or paracervical) injection or prolonged use of subcutaneous infiltration anesthesia during cosmetic surgical procedures. These occurrences have often led to severe toxicity or death in both children and adults. Lidocaine and its two major metabolites may be quantified in blood, plasma or serum to confirm the diagnosis in potential poisoning victims or to assist in the forensic investigation in a case of fatal overdosage. It is important in the interpretation of analytical results to recognize that lidocaine is often routinely administered intravenously as an antiarrhthymic agent in critical cardiac care situations.[12] Treatment with intravenous lipid emulsions (used for parental feeding) to reverse the effects of local anaesthetic toxicity is becoming more common place. [13] 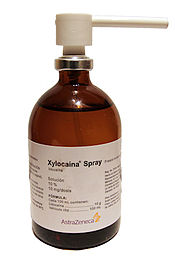 Lidocaine, usually in the form of lidocaine hydrochloride, is available in various forms including:

Lidocaine is often added to cocaine as a diluent.[16] Cocaine numbs the gums when applied, and since lidocaine causes stronger numbness,[17] a user gets the impression of high-quality cocaine when in actuality, the user is receiving a diluted product.[18]

Lidocaine is approximately 95% metabolized (dealkylated) in the liver by CYP3A4 to the pharmacologically-active metabolites monoethylglycinexylidide (MEGX) and then subsequently to the inactive glycine xylidide. MEGX has a longer half life than lidocaine but also is a less potent sodium channel blocker.[21]

The elimination half-life of lidocaine is approximately 90–120 minutes in most patients. This may be prolonged in patients with hepatic impairment (average 343 minutes) or congestive heart failure (average 136 minutes).[22]

Lidocaine alters signal conduction in neurons by blocking the fast voltage gated sodium (Na+) channels in the neuronal cell membrane that are responsible for signal propagation.[23] With sufficient blockage the membrane of the postsynaptic neuron will not depolarize and will thus fail to transmit an action potential. This creates the anaesthetic effect by not merely preventing pain signals from propagating to the brain but by stopping them before they begin. Careful titration allows for a high degree of selectivity in the blockage of sensory neurons, whereas higher concentrations will also affect other modalities of neuron signaling.

Lidocaine is not currently listed by the World Anti-Doping Agency as an illegal substance.[24] Lidocaine is used as an adjuvant, adulterant, mimic and diluent to illegal street drugs (e.g. cocaine). (See U.S. DEA web site).