4-Aminobenzoic acid (also known as para-aminobenzoic acid or PABA because the number 4 carbon in the benzene ring is also known as the para position) is an organic compound with the formula H2NC6H4CO2H. PABA is a white grey crystalline substance that is only slightly soluble in water. It consists of a benzene ring substituted with an amino group and a carboxyl group.

In industry, PABA is mainly prepared by two routes: reduction of 4-nitrobenzoic acid and the Hoffman degradation of the monoamide derived from terephthalic acid.[1] 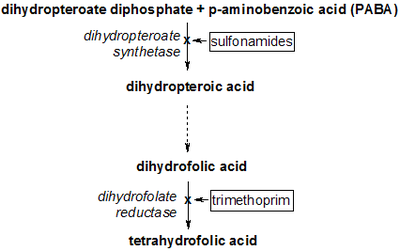 PABA is an intermediate in the bacterial synthesis of folate. It has been referred to as Vitamin Bx.[3] Some bacteria in the human intestinal tract such as E. coli generate PABA from chorismate.[4] However, humans lack the enzymes to convert PABA to folate, and therefore require a dietary supply of folate, unless they have E. coli that produce folate from PABA.[5] In humans that have E. coli that produce both PABA and folate, PABA is considered nonessential and is not recognized as a vitamin.[6]

Sulfonamide drugs are structurally similar to PABA, and their antibacterial activity is due to their ability to interfere with the conversion of PABA to folate by the enzyme dihydropteroate synthetase. Thus, bacterial growth is limited through folate deficiency without effect on human cells.

The potassium salt is used as a drug against fibrotic skin disorders, such as Peyronie's disease, under the trade name Potaba.[7] PABA is also occasionally used in pill form by sufferers of irritable bowel syndrome to treat its associated gastrointestinal symptoms, and in nutritional epidemiological studies to assess the completeness of 24-hour urine collection for the determination of urinary sodium, potassium, or nitrogen levels.

Despite the lack of any recognized syndromes of PABA deficiency in humans, many claims of benefit are made by commercial suppliers of PABA as a nutritional supplement. Benefit is claimed for fatigue, irritability, depression, weeping eczema (moist eczema), scleroderma (premature hardening of skin), patchy pigment loss in skin (vitiligo), and premature grey hair.[8]

Commercial and industrial use

PABA mainly finds use in the biomedical sector. Other uses include its conversion to specialty azo dyes and crosslinking agents.

In the past, PABA was widely used in sunscreens as a UV filter. It is a UVB absorber, meaning that it can absorb wavelengths between 290-320 nm. [9] Patented in 1943, PABA was one of the first active ingredients to be used in sunscreen.[10] The first in vivo studies on mice showed that PABA reduced UV damage. In addition, PABA was shown to protect against skin tumors in rodents.[11] Animal and in vitro studies in the early 1980s suggested PABA might increase the risk of cellular UV damage.[12] On the basis of these studies as well as problems with allergies and clothing discoloration, PABA fell out of favor as a sunscreen. However, water-insoluble PABA derivatives such as padimate O are currently used in some products.