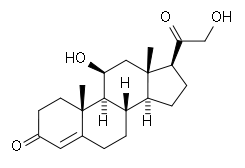 Corticosteroids are a class of steroid hormones that are produced in the adrenal cortex. Corticosteroids are involved in a wide range of physiologic systems such as stress response, immune response and regulation of inflammation, carbohydrate metabolism, protein catabolism, blood electrolyte levels, and behavior. 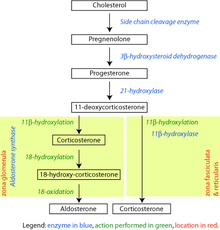 The corticosteroids are synthesized from cholesterol within the adrenal cortex. Most steroidogenic reactions are catalysed by enzymes of the cytochrome P450 family. They are located within the mitochondria and require adrenodoxin as a cofactor (except 21-hydroxylase and 17α-hydroxylase).

In general, corticosteroids are grouped into four classes, based on chemical structure. Allergic reactions to one member of a class typically indicate an intolerance of all members of the class. This is known as the "Coopman classification",[1] after S. Coopman, who defined this classification in 1989.[2]

The highlighted steroids are often used in the screening of allergies to topical steroids.[3]

By route of administration

For use topically on the skin, eye, and mucous membranes.

Topical corticosteroids are divided in potency classes I to IV, with the additional complication that in Europe class IV is the most potent, while in the US this is called Class I.

for use to treat the nasal mucosa, sinuses, bronchii, and lungs.[4] This group includes:

There is also a combination preparation (trade name Advair), containing fluticasone propionate and salmeterol xinafoate (a long-acting bronchodilator).[5] It is approved for children over 12 years old.

Such as prednisone and prednisolone.[6]

Available in injectables for intravenous and parenteral routes.[6]

Synthetic pharmaceutical drugs with corticosteroid-like effect are used in a variety of conditions, ranging from brain tumors to skin diseases. Dexamethasone and its derivatives are almost pure glucocorticoids, while prednisone and its derivatives have some mineralocorticoid action in addition to the glucocorticoid effect. Fludrocortisone (Florinef) is a synthetic mineralocorticoid. Hydrocortisone (cortisol) is available for replacement therapy, e.g. in adrenal insufficiency and congenital adrenal hyperplasia.

Clinical and experimental evidence indicates that corticosteroids can cause permanent eye damage by inducing central serous retinopathy (CSR, also known as central serous chorioretinopathy, CSC). A variety of steroid medications, from anti-allergy nasal sprays (Nasonex, Flonase) to topical skin creams, to eye drops (Tobradex), to prednisone have been implicated in the development of CSR.[8][9]

First known use in 1944 according to: http://www.merriam-webster.com/dictionary/corticosteroid Tadeusz Reichstein together with Edward Calvin Kendall and Philip Showalter Hench were awarded the Nobel Prize for Physiology and Medicine in 1950 for their work on hormones of the adrenal cortex, which culminated in the isolation of cortisone.[11]

Corticosteroids have been used as drug treatment for some time. Lewis Sarett of Merck & Co. was the first to synthesize cortisone, using a complicated 36-step process that started with deoxycholic acid, which was extracted from ox bile.[12] The low efficiency of converting deoxycholic acid into cortisone led to a cost of US $200 per gram. Russell Marker, at Syntex, discovered a much cheaper and more convenient starting material, diosgenin from wild Mexican yams. His conversion of diosgenin into progesterone by a four-step process now known as Marker degradation was an important step in mass production of all steroidal hormones, including cortisone and chemicals used in hormonal contraception.[13] In 1952, D.H. Peterson and H.C. Murray of Upjohn developed a process that used Rhizopus mold to oxidize progesterone into a compound that was readily converted to cortisone.[14] The ability to cheaply synthesize large quantities of cortisone from the diosgenin in yams resulted in a rapid drop in price to US $6 per gram, falling to $0.46 per gram by 1980. Percy Julian's research also aided progress in the field.[15] The exact nature of cortisone's anti-inflammatory action remained a mystery for years after, however, until the leukocyte adhesion cascade and the role of phospholipase A2 in the production of prostaglandins and leukotrienes was fully understood in the early 1980s.

While the evidence for corticosteroids causing peptic ulceration is relatively poor except for high doses taken for over a month,[17] the majority of doctors as of 2010[update] still believe this is the case and would consider protective prophylaxis measures.[18]

Corticosteroids were voted Allergen of the Year in 2005 by the American Contact Dermatitis Society.[20]