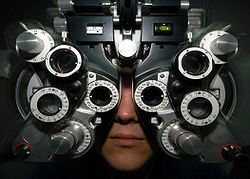 A phoropter in use. 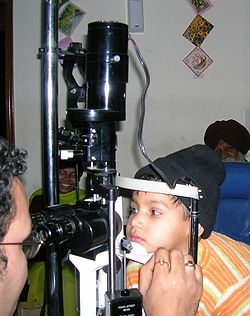 Slit lamp examination of eyes in an Ophthalmology Clinic

Ophthalmology is the branch of medicine that deals with the anatomy, physiology and diseases of the eye. An ophthalmologist is a specialist in medical and surgical eye problems. Since ophthalmologists perform operations on eyes, they are considered to be both surgical and medical specialists.

The word ophthalmology comes from the Greek roots ophthalmos meaning eye and logos meaning word, thought, or discourse; ophthalmology literally means "the science of eyes". As a discipline, it applies to animal eyes also, since the differences from human practice are surprisingly minor and are related mainly to differences in anatomy or prevalence, not differences in disease processes[citation needed]. However, veterinary medicine is regulated separately in many countries and states/provinces resulting in few ophthalmologists treating both humans and animals.

Sushruta wrote Sushruta Samhita in Sanskrit in about 800 BC which describes 76 ocular diseases (of these 51 surgical) as well as several ophthalmological surgical instruments and techniques.[1][2] His description of cataract surgery was more akin to extracapsular lens extraction than to couching.[3] The Indian surgeon Sushruta has been described as the first cataract surgeon.[4][5]

The pre-Hippocratics largely based their anatomical conceptions of the eye on speculation, rather than empiricism. They recognized the sclera and transparent cornea running flushly as the outer coating of the eye, with an inner layer with pupil, and a fluid at the centre. It was believed, by Alcamaeon and others, that this fluid was the medium of vision and flowed from the eye to the brain via a tube. Aristotle advanced such ideas with empiricism. He dissected the eyes of animals, and discovering three layers (not two), found that the fluid was of a constant consistency with the lens forming (or congealing) after death, and the surrounding layers were seen to be juxtaposed. He, and his contemporaries, further put forth the existence of three tubes leading from the eye, not one. One tube from each eye met within the skull.

Rufus recognised a more modern eye, with conjunctiva, extending as a fourth epithelial layer over the eye. Rufus was the first to recognise a two chambered eye; with one chamber from cornea to lens (filled with water), the other from lens to retina (filled with an egg-white-like substance). Galen remedied some mistakes including the curvature of the cornea and lens, the nature of the optic nerve, and the existence of a posterior chamber. Though this model was roughly a correct but simplistic modern model of the eye, it contained errors. Yet it was not advanced upon again until after Vesalius. A ciliary body was then discovered and the sclera, retina, choroid and cornea were seen to meet at the same point. The two chambers were seen to hold the same fluid as well as the lens being attached to the choroid. Galen continued the notion of a central canal, though he dissected the optic nerve, and saw it was solid, He mistakenly counted seven optical muscles, one too many. He also knew of the tear ducts.

Ibn al-Haytham (Alhazen) wrote extensively on optics and the anatomy of the eye in his Book of Optics (1021). He was the first to hint at the retina being involved in the process of image formation.[7][page needed]

Ibn al-Nafis, in The Polished Book on Experimental Ophthalmology, discovered that the muscle behind the eyeball does not support the ophthalmic nerve, and that the optic nerves transect but do not get in touch with each other. He also discovered new treatments for glaucoma and the weakness of vision in one eye when the other eye is affected by disease.[8] Salah–ud-din bin Youssef al-Kalal bi Hama (i.e. the eye doctor of Hama) was a Syrian oculist who flourished in Hama in 1296. He wrote an elaborate treatise of ophthalmology entitled Nur al-Uyun wa Jami al-Funun (light of the eyes and collection of rules).[citation needed]

The seventeenth and eighteenth century saw the use of hand lenses (by Malpighi), microscopes (van Leeuwenhoek), preparations for fixing the eye for study (Ruysch) and later the freezing of the eye (Petit). This allowed for detailed study of the eye and an advanced model. Some mistakes persisted such as: why the pupil changed size (seen to be vessels of the iris filling with blood), the existence of the posterior chamber, and of course the nature of the retina. In 1722 Leeuwenhoek noted the existence of rods and cones[citation needed] though they were not properly discovered until Gottfried Reinhold Treviranus in 1834 by use of a microscope.

The first ophthalmic surgeon in Great Britain was John Freke, appointed to the position by the Governors of St Bartholomew's Hospital in 1727, but the establishment of the first dedicated ophthalmic hospital in 1805; now called Moorfields Eye Hospital in London, England was a transforming event in modern ophthalmology. Clinical developments at Moorfields and the founding of the Institute of Ophthalmology (now part of the University College London) by Sir Stewart Duke Elder established the site as the largest eye hospital in the world and a nexus for ophthalmic research.

Ophthalmologists are medical doctors (MD/MBBS or D.O., not OD or BOptom) who have completed a college degree, medical school, and residency in ophthalmology. In many countries, ophthalmologists also undergo additional specialized training in one of the many subspecialities. Ophthalmology was the first branch of medicine to offer board certification, now a standard practice among all specialties.

In Australia and New Zealand, the FRACO/FRANZCO is the equivalent postgraduate specialist qualification. It is a very competitive speciality to enter training and has a closely monitored and structured training system in place over the five years of postgraduate training. Overseas-trained ophthalmologists are assessed using the pathway published on the RANZCO website. Those who have completed their formal training in the UK and have the CCST/CCT are usually deemed to be comparable.

In Finland, physicians willing to become ophthalmologists must undergo a five year specialization which includes practical training and theoretical studies.

In India, after completing MBBS degree, post-graduation in ophthalmology is required. The degrees are Doctor of Medicine (MD), Master of Surgery (MS), Diploma in Ophthalmic Medicine and Surgery (DOMS) or Diplomate of National Board (DNB). The concurrent training and work experience is in the form of a junior residency at a medical college, eye hospital or institution under the supervision of experienced faculty. Further work experience in form of fellowship, registrar or senior resident refines the skills of these eye surgeons. All India Ophthalmological Society (AIOS) and various state level ophthalmological societies (like DOS) hold regular conferences and actively promote continuing medical education. Royal colleges of the United Kingdom, mainly Royal College of Surgeons of Edinburgh (RCSEd), Royal College of Ophthalmologists (RCOphth) and Royal College of Physicians and Surgeons of Glasgow (RCPSG) have conducted their fellowship and membership examinations since the mid-1990s and awarding fellowships and memberships to the successful candidates.

In Pakistan, after MBBS, a 4 year full time residency programme leads to an exit level FCPS examinations in Ophthalmology, held under the auspices of College of Physicians & Surgeons, Pakistan. The tough examination is assessed by both highly qualified Pakistani & eminent International Ophthalmic Consultants. As a prerequisite to the final examinations, an Intermediate Module, Optics & Refraction Module; and a Dissertation writing on a research carried out under supervision is also assessed. Moreover, a two and a half years residency programme leads to MCPS while a 2 years training of DOMS is also being offered.[9] For candidates in the Military, a stern 2 years Grading course, with quarterly assessments, is held under Armed Forces Post Graduate Medical Institute. Rawalpindi. M.S.(Ophthalmology) is also one of the specialty programmes. In addition to programmes for doctors, various diplomas and degrees for opticians are also being offered to produce competent optic technicians in this field. These programmes are being offered notably by Punjab Institute of Preventive Ophthalmology (PIPO) Lahore and Pakistan Institute of Community Ophthalmology in Peshawar.[10] Sub-specialty fellowships are also being offered in the fields of pediatric ophthalmology and vitreo-retinal ophthalmology.

Ophthalmology is a considered a medical specialty that uses medicine and surgery to treat diseases of the eye. To become a general ophthalmologist, a candidate must have completed a Doctor of Medicine degree or its equivalent (e.g. MBBS), have passed the physician licensure exam, completed an internship in medicine, and completed residency at any Philippine Academy of Ophthalmology (PAO)[11] accredited program. Attainment of board certification in ophthalmology from PBO is optional, but is preferred and required to gain privileges in most major health institutions. Graduates of residency programs can receive further training in subspecialties of ophthalmology such as neuro-ophthalmology, etc. by completing a fellowship program which varies in length depending on each program's requirements. The leading professional organization in the country is the Philippine Academy of Ophthalmology[12] which also regulates ophthalmology residency programs and board certification through its accrediting agency, the Philippine Board of Ophthalmology.

In Ireland the Royal College of Surgeons of Ireland grants FRCSI. Postgraduate work as a specialist registrar and one of these degrees is required. Clinical work for study is within Health Service Executive (HSE) in Ireland.

In the United States, four years of residency training after medical school are required, with the first year being an internship in surgery, internal medicine, pediatrics, or a general transition year. Optional fellowships in advanced topics may be pursued for several years after residency. Most currently practicing ophthalmologists train in medical residency programs accredited by the Accreditation Council for Graduate Medical Education (ACGME) and are board-certified by the American Board of Ophthalmology. Some physicians that train in osteopathic medical schools may hold a Doctor of Osteopathy ("DO") degree rather than an MD. The same residency and certification requirements for ophthalmology training must be fulfilled by osteopathic physicians. Completing the requirements of continuing medical education is mandatory for continuing licensure and re-certification. Professional bodies like the AAO and ASCRS: The American Society of Cataract and Refractive Surgery organize conferences and help members through continuing medical education programs to maintain certification, in addition to political advocacy and peer support.

Ophthalmology includes sub-specialities which deal either with certain diseases or diseases of certain parts of the eye. Some of them are:

For a comprehensive list of surgeries performed by ophthalmologists, see eye surgery.