The cornea is the transparent front part of the eye that covers the iris, pupil, and anterior chamber. Together with the lens, the cornea refracts light, with the cornea accounting for approximately two-thirds of the eye's total optical power.[1][2] In humans, the refractive power of the cornea is approximately 43 dioptres.[3] While the cornea contributes most of the eye's focusing power, its focus is fixed. The curvature of the lens, on the other hand, can be adjusted to "tune" the focus depending upon the object's distance. Medical terms related to the cornea often start with the prefix "kerat-" from the Greek word κέρας, horn.

The cornea has unmyelinated nerve endings sensitive to touch, temperature and chemicals; a touch of the cornea causes an involuntary reflex to close the eyelid. Because transparency is of prime importance the cornea does not have blood vessels; it receives nutrients via diffusion from the tear fluid at the outside and the aqueous humour at the inside and also from neurotrophins supplied by nerve fibres that innervate it. In humans, the cornea has a diameter of about 11.5 mm and a thickness of 0.5–0.6 mm in the center and 0.6–0.8 mm at the periphery. Transparency, avascularity, the presence of immature resident immune cells, and immunologic privilege makes the cornea a very special tissue. The cornea has no blood supply; it gets oxygen directly through the air. Oxygen first dissolves in the tears and then diffuses throughout the cornea to keep it healthy.[4]

It borders with the sclera by the corneal limbus.

The most abundant soluble protein in mammalian cornea is albumin.[5]

In lampreys, the cornea is solely an extension of the sclera, and is separate from the skin lying above it, but in more advanced vertebrates it is always fused with the skin to form a single structure, albeit one composed of multiple layers. In fish, and aquatic vertebrates in general, the cornea plays no role in focusing light, since it has virtually the same refractive index as water.[6]

The human cornea, like those of other primates, has five layers; the corneas of cats, dogs, wolves, and other carnivores only have four.[7] From the anterior to posterior the five layers of the human cornea are:

The mnemonic "EBSDEin", read as "Ebstein" can be used to remember the layers in sequence.[10]

Upon death or removal of an eye the cornea absorbs the aqueous humor, thickens, and becomes hazy. Transparency can be restored by putting it in a warm, well-ventilated chamber at 31 °C (88 °F, the normal temperature), allowing the fluid to leave the cornea and become transparent. The cornea takes in fluid from the aqueous humor and the small blood vessels of the limbus, but a pump ejects the fluid immediately upon entry. When energy is deficient the pump may fail, or works too slowly to compensate, causing swelling. This could arise at death, but a dead eye can be placed in a warm chamber and the reservoirs of sugar and glycogen can keep the cornea transparent for at least 24 hours. The endothelium controls this pumping action, and as discussed above, damage thereof is more serious, and is a cause of opaqueness and swelling. When damage to the cornea occurs, such as in a viral infection, the collagen used to repair the process is not regularly arranged, leading to an opaque patch (leukoma). When a cornea is needed for transplant, as from an eye bank, the best procedure is to remove the cornea from the eyeball, preventing the cornea from absorbing the aqueous humor.[8]

The cornea is one of the most sensitive tissues of the body, as it is densely innervated with sensory nerve fibres via the ophthalmic division of the trigeminal nerve by way of 70–80 long ciliary nerves and short ciliary nerves. The ciliary nerves run under the endothelium and exit the eye through holes in the sclera apart from the optic nerve (which transmits only optic signals).[8]

The nerves enter the cornea via three levels; scleral, episcleral and conjunctival. Most of the bundles give rise by subdivision to a network in the stroma, from which fibres supply the different regions. The three networks are midstromal, subepithelial/Bowman's layer, and epithelium. The receptive fields of each nerve ending are very large, and may overlap.

Corneal nerves of the subepithelial layer terminate near superficial epithelial layer of the cornea in a logarithmic spiral pattern.[11] The density of epithelial nerves decreases with age, especially after the seventh decade.[12]

The optical component is concerned with producing a reduced inverted image on the retina. The eye's optical system consists of not only two but four surfaces—two on the cornea, two on the lens. Rays are refracted toward the midline. Distant rays, due to their parallel nature, converge to a point on the retina. The cornea admits light at the greatest angle. The aqueous and vitreous humors both have a refractive index of 1.336, whereas the cornea has a refractive index of 1.376. Because the change in refractive index between cornea and aqueous humor is relatively small compared to the change at the air–cornea interface, it has a negligible refractive effect, typically -6 diopters.[8] 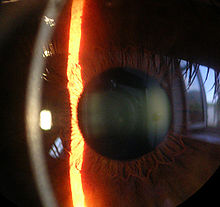 Slit lamp image of the cornea, iris and lens

Various refractive eye surgery techniques change the shape of the cornea in order to reduce the need for corrective lenses or otherwise improve the refractive state of the eye. In many of the techniques used today, reshaping of the cornea is performed by photoablation using the excimer laser.

If the corneal stroma develops visually significant opacity, irregularity, or edema, a cornea of a deceased donor can be transplanted. Because there are no blood vessels in the cornea, there are also few problems with rejection of the new cornea.

Orthokeratology is a method using specialized hard or rigid gas-permeable contact lenses to transiently reshape the cornea in order to improve the refractive state of the eye or reduce the need for eyeglasses and contact lenses.

In 2009, researchers at the University of Pittsburgh Medical center demonstrated that stem cells collected from human corneas can restore transparency without provoking a rejection response in mice with corneal damage.[13]