A cataract is a clouding that develops in the crystalline lens of the eye or in its envelope, varying in degree from slight to complete opacity and obstructing the passage of light. Early in the development of age-related cataract, the power of the lens may be increased, causing near-sightedness (myopia), and the gradual yellowing and opacification of the lens may reduce the perception of blue colours. Cataracts typically progress slowly to cause vision loss, and are potentially blinding if untreated. The condition usually affects both eyes, but almost always one eye is affected earlier than the other.[1]

A senile cataract, occurring in the elderly, is characterized by an initial opacity in the lens, subsequent swelling of the lens and final shrinkage with complete loss of transparency.[2] Moreover, with time the cataract cortex liquefies to form a milky white fluid in a Morgagnian cataract, which can cause severe inflammation if the lens capsule ruptures and leaks. Untreated, the cataract can cause phacomorphic glaucoma. Very advanced cataracts with weak zonules are liable to dislocation anteriorly or posteriorly. Such spontaneous posterior dislocations (akin to the historical surgical procedure of couching) in ancient times were regarded as a blessing from the heavens, because some perception of light was restored in the cataractous patients.

Some children develop cataracts, called congenital cataracts, before or just after birth, but these are usually dealt with in a different way to cataracts in adults.[3]

Cataract derives from the Latin cataracta meaning "waterfall" and that from the Greek καταράκτης (kataraktēs) or καταρράκτης (katarrhaktēs), "down-rushing",[4] from καταράσσω (katarassō) meaning "to dash down"[5] (from kata-, "down"; arassein, "to strike, dash").[6][7] As rapidly running water turns white, the term may later have been used metaphorically to describe the similar appearance of mature ocular opacities. In Latin, cataracta had the alternate meaning "portcullis"[8] and it is possible that the name passed through French to form the English meaning "eye disease" (early 15c.), on the notion of "obstruction".[9] Early Persian physicians called the term nazul-i-ah, or "descent of the water"—vulgarised into waterfall disease or cataract—believing such blindness to be caused by an outpouring of corrupt humour into the eye.[10]

Age-related cataract is responsible for 48% of world blindness, which represents about 18 million people, according to the World Health Organization (WHO).[12] In many countries, surgical services are inadequate, and cataracts remain the leading cause of blindness. As populations age, the number of people with cataracts is growing. Cataracts are also an important cause of low vision in both developed and developing countries. Even where surgical services are available, low vision associated with cataracts may still be prevalent, as a result of long waits for operations and barriers to surgical uptake, such as cost, lack of information and transportation problems.

The increase in ultraviolet radiation resulting from depletion of the ozone layer is expected to increase the incidence of cataracts.[15]

The earliest records are from the Bible[verification needed], as well as early Hindu records.[16][verification needed] Early cataract surgery was developed by the Indian surgeon, Sushruta (6th century BCE).[17][verification needed] The Indian tradition of cataract surgery was performed with a special tool called the jabamukhi salaka, a curved needle used to loosen the lens and push the cataract out of the field of vision.[17] The eye would later be soaked with warm butter and then bandaged.[17] Though this method was successful, Sushruta cautioned that it should only be used when necessary.[17] Greek physicians and philosophers traveled to India where these surgeries were performed by physicians.[17] The removal of cataract by surgery was also introduced into China from India.[18]

The first references to cataract and its treatment in Ancient Rome are found in 29 CE in De Medicinae, the work of the Latin encyclopedist Aulus Cornelius Celsus.[19] The Romans were pioneers in the health arena—particularly in the area of eye care.[20]

The Muslim ophthalmologist Ammar ibn Ali, in his Choice of Eye Diseases, written circa 1000 CE, wrote of his invention of the hypodermic needle and how he discovered the technique of cataract extraction while experimenting with it on a patient.[21] 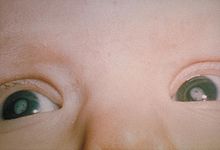 Bilateral cataracts in an infant due to congenital rubella syndrome

The following is a classification of the various types of cataracts. This is not comprehensive, and other unusual types may be noted.

As a cataract becomes more opaque, clear vision is compromised. A loss of visual acuity is noted. Contrast sensitivity is also lost, so that contours, shadows and color vision are less vivid. Veiling glare can be a problem as light is scattered by the cataract into the eye. The affected eye will have an absent red reflex. A contrast sensitivity test should be performed, and if a loss in contrast sensitivity is demonstrated, an eye specialist consultation is recommended.

It may be advisable to seek medical opinion, particularly in high-risk groups such as diabetics, if a "halo" is observed around street lights at night, especially if this phenomenon appears to be confined to one eye only.

Cataracts develop for a variety of reasons, including long-term exposure to ultraviolet light, exposure to radiation, secondary effects of diseases such as diabetes, hypertension and advanced age, or trauma (possibly much earlier); they are usually a result of denaturation of lens protein. Genetic factors are often a cause of congenital cataracts, and positive family history may also play a role in predisposing someone to cataracts at an earlier age, a phenomenon of "anticipation" in presenile cataracts. Cataracts may also be produced by eye injury or physical trauma. A study among Icelandair pilots showed commercial airline pilots are three times more likely to develop cataracts than people with nonflying jobs. This is thought to be caused by excessive exposure to radiation coming from outer space.[23] Supporting this theory is the report that 33 of the 36 Apollo astronauts involved in the nine Apollo missions to leave Earth orbit have developed early stage cataracts that have been shown to be caused by radiation exposure to cosmic rays during their trip.[24] At least 39 former astronauts have developed cataracts; 36 of those were involved in high-radiation missions such as the Apollo missions.[25] Cataracts are also unusually common in persons exposed to infrared radiation, such as glassblowers, who suffer from "exfoliation syndrome". Exposure to microwave radiation can cause cataracts. Atopic or allergic conditions are also known to quicken the progression of cataracts, especially in children.[26] Cataracts can also be caused by iodine deficiency.[27]

Cataracts may be partial or complete, stationary or progressive, hard or soft.

Some drugs can induce cataract development, such as corticosteroids[28] and Seroquel.

There are various types of cataracts, e.g. nuclear, cortical, mature, and hypermature. Cataracts are also classified by their location, e.g. posterior (classically due to steroid use)[28][29] and anterior (common (senile) cataract related to aging).

Although cataracts have no scientifically proven prevention, wearing ultraviolet-protecting sunglasses may slow the development of cataracts.[31][32] Regular intake of antioxidants (such as vitamins A, C and E) is theoretically helpful, but taking them as a supplement has not been shown to have a benefit.[33] The less well-known antioxidant N-acetylcarnosine has been shown in randomized controlled clinical trials to treat cataracts, and can be expected to prevent their formation by similar mechanisms.[34] N-acetylcarnosine is a proposed treatment for other ocular disorders that are instigated, or exacerbated, by oxidative stress, including glaucoma, retinal degeneration, corneal disorders, and ocular inflammation.[35] 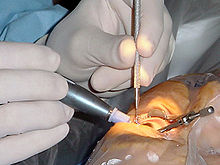 Cataract surgery, using a temporal approach phacoemulsification probe (in right hand) and "chopper" (in left hand) being done under operating microscope at a Navy medical center

The operation to remove cataracts can be performed at any stage of their development. There is no longer a reason to wait until a cataract is "ripe" before removing it.[36] However, because any surgery involves some risk, it is usually worth waiting until there is some change in vision before removing the cataract.[36]

ECCE surgery consists of removing the lens, but leaving the majority of the lens capsule intact. High frequency sound waves (phacoemulsification) are sometimes used to break up the lens before extraction.

Intra-capsular (ICCE) surgery involves removing the entire lens of the eye, including the lens capsule, but it is rarely performed in modern practice.

Cataract operations are usually performed using a local anaesthetic, and the patient is allowed to go home the same day. Recent improvements in intraocular technology now allow cataract patients to choose a multifocal lens to create a visual environment in which they are less dependent on glasses. Such multifocal lenses are flexible and can be controlled using the same eye muscles used to control the natural lens. Under some medical systems, multifocal lenses cost extra. Traditional intraocular lenses are monofocal.

Research is scant and mixed, but weakly positive, for the nutrients lutein and zeaxanthin.[37][38][39][40] Bilberry extract shows promise in rat models[41][42] and in clinical studies.[43]

In the past few years, eye drops containing acetyl-carnosine have been used by several thousands of cataract patients across the world. The drops are believed to work by reducing oxidation and glycation damage in the lens, particularly reducing crystallin crosslinking.[44][45] Randomized controlled trials indicate the drops may be especially appropriate for seniors, or others where surgery is not advised.[46]