/ˈɒŋkɵsɜrˈsaɪ.əsɨs/ or /ˈɒŋkɵsɜrˈkaɪ.əsɨs/), also known as river blindness and Robles' disease, is a parasitic disease caused by infection by Onchocerca volvulus, a nematode (roundworm).[1] Onchocerciasis is the world's second-leading infectious cause of blindness.[1] It is not the nematode, but its endosymbiont, Wolbachia pipientis, that causes the severe inflammatory response that leaves many blind.[2] The parasite is transmitted to humans through the bite of a black fly of the genus Simulium. The larval nematodes spread throughout the body. When the worms die, their Wolbachia symbionts are released, triggering a host immune system response that can cause severe itching, and can destroy optical tissue in the eye.[3]

The vast majority of infections occur in sub-Saharan Africa, although cases have also been reported in Yemen and isolated areas of Central and South America.[4] An estimated 18 million people suffer from onchocerciasis, with approximately 270,000 cases of blindness related to the infection.[1]

In 1915, Dr. Rodolfo Robles Valverde's study on patients with river blindness in Guatemala led to the discovery that the disease is caused by filaria of O. volvulus, and sheds light on the life cycle and transmission of the parasite. Using case studies of coffee plantation workers in Guatemala, Robles hypothesized the vector of the disease is a day-biting insect, and more specifically, two anthropophilic species of Simulium flies found in the endemic areas. He published his findings on a “new disease” from Guatemala associated with subcutaneous nodules, anterior ocular (eye) lesions, dermatitis, and microfilariae in 1917.[5]

Treatment may involve the use of the drug ivermectin. For best effect, entire communities are treated at the same time. A single dose may kill first-stage larvae (microfilariae) in infected people, and it prevents transmission for many months in the remaining population.[6] Other drugs are also available, including the tetracycline-class antibiotic doxycycline, which kills the Wolbachia and renders the female nematodes sterile. The removal of the palpable nodules is common in Guatemala, Ecuador, and Mexico.[7]

Onchocerciasis may be divided into the following phases or types:[8]:440-441[verification needed]

Erisipela de la costa
An acute phase, it is characterized by swelling of the face, with erythema and itching.[8]:440 Onchocerciasis causes different kinds of skin changes and these changes vary in different geographic regions. This skin change, erisípela de la costa', of acute onchocerciasis is most commonly seen among victims in Central and South America.[7]

Additionally, the various skin changes associated with onchocerciasis may be described as follows:[8]:440

The life of the parasite can be traced through the black fly and the human hosts in the following steps:[citation needed]

Adult worms remain in subcutaneous nodules, limiting access to the host's immune system.[citation needed] Microfilariae, in contrast, are able to induce intense inflammatory responses, especially upon their death. Dying microfilariae have been recently discovered to release Wolbachia surface protein that activates TLR2 and TLR4, triggering innate immune responses and producing the inflammation and its associated morbidity.[9] Wolbachia species have been found to be endosymbionts of O. volvulus adults and microfilariae, and are thought to be the driving force behind most of O. volvulus morbidity. The severity of illness is directly proportional to the number of infected microfilariae and the power of the resultant inflammatory response.[citation needed]

Skin involvement typically consists of intense itching, swelling, and inflammation.[10] A grading system has been developed to categorize the degree of skin involvement:[11][12][verification needed]

Ocular involvement provides the common name associated with onchocerciasis, river blindness, and may involve any part of the eye from conjunctiva and cornea to uvea and posterior segment, including the retina and optic nerve.[10] The microfilariae migrate to the surface of the cornea. Punctate keratitis occurs in the infected area. This clears up as the inflammation subsides. However, if the infection is chronic, sclerosing keratitis can occur, making the affected area become opaque. Over time, the entire cornea may become opaque, thus leading to blindness. Some evidence suggests the effect on the cornea is caused by an immune response to bacteria present in the worms.[citation needed].As the skin is itchy, it can lead to severe rashes and you can permanently kill off patches of skin.

The Mazzotti reaction, first described in 1948, is a symptom complex seen in patients after undergoing treatment of onchocerciasis with the medication diethylcarbamazine (DEC). Mazzotti reactions can be life-threatening, and are characterized by fever, urticaria, swollen and tender lymph nodes, tachycardia, hypotension, arthralgias, oedema, and abdominal pain that occur within seven days of treatment of microfilariasis. The phenomenon is so common when DEC is used for the treatment of onchocerciasis that this drug is the basis of a skin patch test used to confirm that diagnosis. The drug patch is placed on the skin, and if the patient is infected with the microfilaria of O. volvulus, localized pruritus and urticaria are seen at the application site.[13]

Various control programs aim to stop onchocerciasis from being a public health problem. The first was the Onchocerciasis Control Programme (OCP), which was launched in 1974, and at its peak, it covered 30 million people in eleven countries. Through the use of larvicide spraying of fast-flowing rivers to control black fly populations, and from 1988 onwards, the use of ivermectin to treat infected people, the OCP eliminated onchocerciasis as a public health problem. The OCP, a joint effort of the World Health Organisation, the World Bank, the United Nations Development Programme and the UN Food and Agriculture Organization, was considered to be a success, and came to an end in 2002. Continued monitoring ensures onchocerciasis cannot reinvade the area of the OCP.[14]

In 1992, the Onchocerciasis Elimination Programme for the Americas (OEPA), which also relies on ivermectin, was launched.[15]

In 1995, the African Programme for Onchocerciasis Control (APOC) began covering another 19 countries, mainly relying upon the use of ivermectin. Its goal is to set up a community-directed supply of ivermectin for those who are infected. In these ways, transmission has declined.[16] 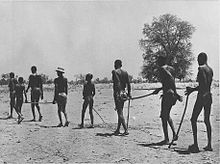 The burden of onchocerciasis: children leading blind adults in Africa

In mass drug administration (MDA) programmes, the treatment for onchocerciasis is ivermectin (trade name: Mectizan); infected people can be treated with two doses of ivermectin, six months apart, repeated every three years. The drug paralyses and kills the microfilariae causing fever, itching, and possibly oedema, arthritis and lymphadenopathy. Intense skin itching is eventually relieved, and the progression towards blindness is halted. In addition, while the drug does not kill the adult worm, it does prevent them from producing additional offspring. The drug therefore prevents both morbidity and transmission.

Ivermectin treatment is particularly effective because it only needs to be taken once or twice a year, needs no refrigeration, and has a wide margin of safety, with the result that it has been widely given by minimally trained community health workers.[17]

For the treatment of individuals, doxycycline is used to kill the Wolbachia bacteria that live in adult worms. This adjunct therapy has been shown to significantly lower microfilarial loads in the host, and may have activity against the adult worms, due to the symbiotic relationship between Wolbachia and the worm.[18][19] In four separate trials over ten years with various dosing regimens of doxycycline for individualized treatment, doxycycline was found to be effective in sterilizing the female worms and reducing their numbers over a period of four to six weeks. Research on other antibiotics, such as rifampicin, has shown it to been effective in animal models at reducing Wolbachia both as an alternative and as an adjunct to doxycycline.[20] However, doxycycline treatment requires daily dosing for at least four to six weeks, making it more difficult to administer in the affected areas.[17]

Ivermectin kills the parasite by interfering with the nervous system and muscle function, in particular, by enhancing inhibitory neurotransmission. The drug binds to and activates glutamate-gated chloride channels (GluCls).[17] These channels, present in neurons and myocytes, are not invertebrate-specific, but are protected in vertebrates from the action of ivermectin by the blood-brain barrier.[17] Ivermectin is thought to irreversibly activate these channel receptors in the worm, eventually causing an inhibitory postsynaptic potential (IPSP). The chance of a future action potential occurring in synapses between neurons decreases and the nematodes experience flaccid paralysis followed by death.[21][22][23]

Ivermectin is directly effective against the larval stage microfilariae of O. volvulus; they are paralyzed and can be killed by eosinophils and macrophages. It does not kill adult females (macrofilariae), but does cause them to cease releasing microfilariae, perhaps by paralyzing the reproductive tract.[17]

Since 1988, ivermectin has been provided free of charge for use in humans by Merck through the Mectizan donation program (MDP). The MDP works together with ministries of health and nongovernmental development organisations, such as the World Health Organization, to provide free ivermectin to those who need it in endemic areas.[24]

About 99% of onchocerciasis cases occur in Africa.[4] As of 2008, about 18 million people were infected with this parasite; about 300,000 had been permanently blinded.[28] Onchocerciasis is currently endemic in 30 African countries, Yemen, and isolated regions of South America.[29] Over 85 million people live in endemic areas, and half of these reside in Nigeria. Another 120 million people are at risk for contracting the disease. Due to the vector’s breeding habitat, the disease is more severe along the major rivers in the northern and central areas of the continent, and severity declines in villages farther from rivers.[citation needed] Travelers who do not stay long in those areas have little risk of developing the disease, as it requires prolonged exposure to the fly bites, and parasite introduction.

According to a 2002 WHO report, onchocerciasis has not caused a single death, but its global burden is 987,000 disability adjusted life years (DALYs). The severe pruritis alone accounts for 60% of the DALYs. Infection reduces the host’s immunity and resistance to other diseases, which results in an estimated reduction in life expectancy of 13 years.[29]

Animal models for the disease are somewhat limited, as the parasite only lives in primates, but there are close parallels. Litomosoides sigmodontis , which will naturally infect cotton rats, has been found to fully develop in BALB/c mice. Onchocerca ochengi, the closest relative of O. volvulus, lives in intradermal cavities in cattle, and is also spread by black flies. Both systems are useful, but not exact, animal models.[30]