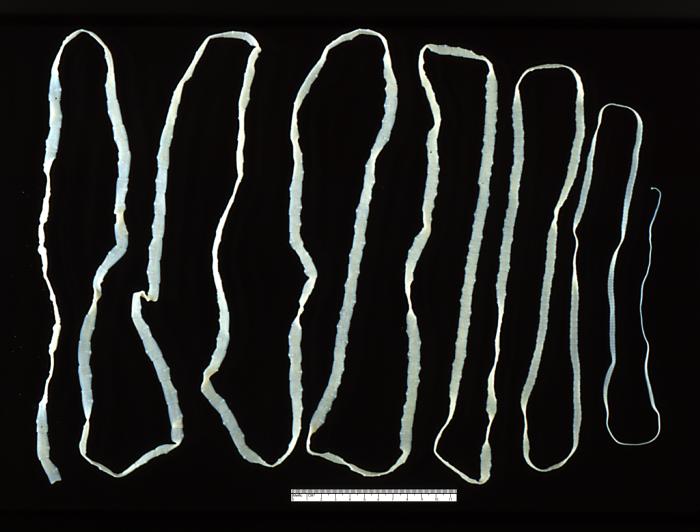 "Taenia saginata", also known as "Taeniarhynchus saginata" or the Beef tapeworm, is a of both and s, but which can only reproduce asexually in humans. "Taenia saginata" occurs where cattle are raised by infected humans maintaining poor hygine, human is improperly disposed of, meat inspection programs are poor, and where meat is eaten without proper cooking. The disease is relatively common in , some parts of , the , , and .

"Taenia saginata" are normally 3m to 5m in length, but it can become very large, over 20m in some situations. It does not have a or armature. The scolex is composed of 4 powerful suckers. The segments are made up of mature and gravid . The mature proglottid contains the (unbranched), , pore, , and . In the gravid proglottid the uterus is branched that are filled with eggs. It is the segments that detaches and are passed in the feces. Each of these segments can act like a worm. When they dry up it ruptures and the eggs are released. The egg can only infect cattle, the intermediate host. Inside the cow's the hatch with the help of the gastric and intestinal secretions and migrates through the blood to the muscle. There it develops into infective .

Humans become infected when they eat beef that is not cooked fully. Prevention is easy. Cook beef until it is no longer pink inside because cysticerci die at 56 degrees Celsius. Also, if beef is frozen at -5 degrees Celsius it is considered to be safe to consume.

This parasite is found anywhere where beef is eaten, even in countries like the United States where there are strict federal sanitation polices. In the U.S. the incidence of becoming infected is low however, one-fourth of infected cattle are still sold.

Symptoms are usually asymptomatic, as impossible as that may sound. Some symptoms include dizziness, abdominal pain, diarrhea, headaches, nausea, and loss of appetite. There can be intestinal obstruction in humans and this alleviated by surgery. The tapeworm can also expel s that can cause an allergic reaction in the individual.

Diagnosis: The eggs look like other eggs from the family , so it is only possible to identify the eggs to the family, not to the species, level. Since it is difficult to diagnose using eggs alone, looking at the scolex or the gravid proglottids can help identify if it is "Taenia saginata". Proglottids sometimes trickle down the thighs of infected humans and are visible with unaided eye and aid with identification. When the is injected with , its branches become visible. Counting the uterine branches enables some identification ("Taenia saginata" uteri have twelve or more branches on each side, while other species like "" only have five to ten).

Treatment for infection can be done with the drug . Praziquantel opens membrane s causing of the worm, aiding the body in expelling the parasite through . , used to treat many different kinds of infections with and adult tapeworms, is quite effective.