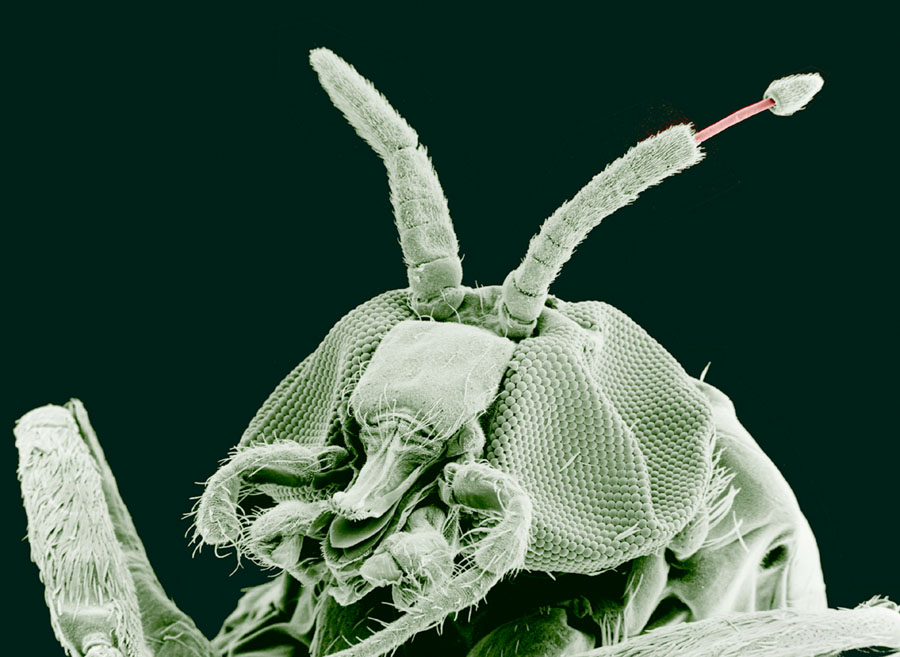 A black fly (sometimes called a buffalo , turkey gnat or white socks) is any member of the family Simuliidae of the . They are related to the , , and . There are over 1,800 known species of black flies (of which 11 are extinct). The majority of species belong to the immense genus "". Like es, to which they are related, most black flies gain nourishment by sucking the of other animals, although the males feed mainly on . They are usually small, black or gray, with short legs and antennae. They are a common nuisance for humans, and many s have programs to suppress the black fly population. They spread several diseases, including in ("Simulium damnosum" and "S. neavei") and the ("Simulium callidum" and "S. metallicum" in , also "S. ochraceum" in Central and ).

The black fly is central to the transmission of the "Onchocerca volvulus", which causes , also known as . It serves as the host for the nematode and acts as the vector by which the disease is spread. Transmission of the parasite occurs through the bite of a black fly when feeding on human .

* In the wetter parts of the northern latitudes of , including parts of , and the , black fly populations swell from Mid-May to July, becoming a nuisance to humans engaging in common outdoor activitites such as , and backpacking. They can also be a significant nuisance in mountainous areas.
* In Canada, black flies are a scourge to livestock, causing weight loss in cattle and in some cases, death. [The Canadian Encyclopedia: [http://www.thecanadianencyclopedia.com/index.cfm?PgNm=TCE&Params=A1ARTA0000798 Black Fly] ]
* The , in the , operates the largest single black fly control program in North America. The program is seen as beneficial to both the quality of life for residents and to the state's tourism industry. [http://www.depweb.state.pa.us/blackfly]
* The ("Simulium posticatum") in was once a public health problem in the area around Blandford Forum, , due to its large numbers and the painful lesions caused by its bite. It was eventually controlled by carefully targeted applications of "". [BBC h2g2: [http://www.bbc.co.uk/dna/h2g2/A6756519 The Blandford Fly] ]

Eggs are laid in running water, and the e attach themselves to rocks. Breeding success is highly sensitive to water pollution. [cite news |first=Beth |last=Daley |title=Black flies surge in Maine's clean rivers |url=http://www.boston.com/news/science/articles/2008/06/23/black_flies_surge_in_maines_clean_rivers/ |publisher=Boston Globe |date=2008-06-23 |accessdate=2008-06-23] The larvae use tiny hooks at the end of the abdomen to hold on to the substrate, using silk holdfasts and threads to move or hold their place. They have foldable fans surrounding their mouths. When feeding, the fans expand, catching passing debris (small organic particles, algae and bacteria). Every few seconds, the larva scrapes the fan's catch into its mouth. Black flies depend on habitats to bring food to them. They will pupate under water and then emerge in a bubble of air as flying adults. During emergence, they are often preyed upon by trout.

As adults, males feed on nectar while females also feed on blood. Some species in Africa can range as far as 40 miles from aquatic breeding sites in search of their blood meals, while other species have more limited range. Different species prefer different host sources for their blood meal, which is sometimes reflected in the common name for the species. They feed in the daytime, preferably when wind speeds are low. based insect repellants may prove counter-productive and attract greater numbers of black flies; products designed for are effective but can only be applied to clothing, limiting their utility. [cite web |url=http://creatures.ifas.ufl.edu/livestock/bfly.htm |title=Black flies, "Simulium" spp. (Insecta: Diptera: Simuliidae) |accessdate=2008-07-16 |author= |last=Butler |first=J. F. |authorlink= |coauthors= |date=2007 |year= |month= |format= |work=Featured Creatures |publisher=University of Florida |pages= |language= |doi= |archiveurl= |archivedate= |quote= ]

Black flies are , which means that they spend the winter in the larval stage, often under the ice, where they slowly mature.

The is characterized by an abundance of lakes and swift-flowing streams and hence offers optimum conditions for black flies to lay their eggs. The Canadian Shield is notorious for the abundance of black flies in the summertime.