Exophthalmos
"Proptosis" redirects here. For the condition of drooping of the eyelid, see Ptosis (eyelid).

Exophthalmos (also called exophthalmia or proptosis) is a bulging of the eye anteriorly out of the orbit. Exophthalmos can be either bilateral (as is often seen in Graves' disease) or unilateral (as is often seen in an orbital tumor). Measurement of the degree of exophthalmos is performed using an exophthalmometer. Complete or partial dislocation from the orbit is also possible from trauma or swelling of surrounding tissue resulting from trauma. Trauma to the orbit can lead to bleeding behind the eye, a condition called retrobulbar hemorrhage. The hemorrhage has nowhere to escape and the increased pressure pushes the eye out of the socket, leading to exopthalmos or proptosis and can also cause blindness if not treated promptly.

In the case of Graves' disease, the displacement of the eye is due to abnormal connective tissue deposition in the orbit and extraocular muscles which can be visualized by CT or MRI.[1]

If left untreated, exophthalmos can cause the eyelids to fail to close during sleep leading to corneal dryness and damage. Another possible complication would be a form of redness or irritation called "Superior limbic keratoconjunctivitis", where the area above the cornea becomes inflamed as a result of increased friction when blinking. The process that is causing the displacement of the eye may also compress the optic nerve or ophthalmic artery, leading to blindness. 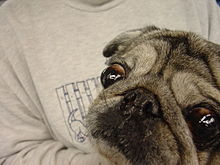