Wegener's granulomatosis (WG), more recently granulomatosis with polyangiitis (Wegener's) (GPA), is an incurable form of vasculitis (inflammation of blood vessels) that affects the nose, lungs, kidneys and other organs. Due to its end-organ damage, it is life-threatening and requires long-term immunosuppression.[1] Five-year survival is up to 87%, with some of the mortality due to toxicity of treatment. It is named after Dr. Friedrich Wegener, who described the disease in 1936.[2] In 2011, three professional bodies proposed a more descriptive name.[3]

Wegener's granulomatosis is part of a larger group of vasculitic syndromes, all of which feature an autoimmune attack by an abnormal type of circulating antibody termed ANCAs (antineutrophil cytoplasmic antibodies) against small and medium-size blood vessels. Apart from Wegener's, this category includes Churg-Strauss syndrome and microscopic polyangiitis.[1] Although Wegener's granulomatosis affects small and medium-sized vessels,[4] it is formally classified as one of the small vessel vasculitides in the Chapel Hill system.[5]

Initial signs are extremely variable, and diagnosis can be severely delayed due to the nonspecific nature of the symptoms. Rhinitis is generally the first sign in most patients.[1] 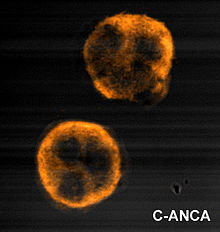 Immunofluorescence pattern produced by binding of ANCA to ethanol-fixed neutrophils, from a patient with Wegener's Granulomatosis. 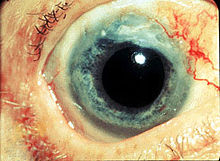 Wegener's granulomatosis is usually suspected only when a patient has had unexplained symptoms for a long period of time. Determination of ANCAs can aid in the diagnosis, but positivity is not conclusive and negative ANCAs are not sufficient to reject the diagnosis. Cytoplasmic staining ANCAs that react with the enzyme proteinase 3 (cANCA) in neutrophils (a type of white blood cell) are associated with Wegener's.[1]

If the patient has renal failure or cutaneous vasculitis, these are the most logical organs to obtain a biopsy from. Rarely, thoracoscopic lung biopsy is required. On histopathological examination, a biopsy will show leukocytoclastic vasculitis with necrotic changes and granulomatous inflammation (clumps of typically arranged white blood cells) on microscopy. These granulomas are the main reason for the appellation of "Wegener's granulomatosis", although it is not an essential feature. Unfortunately, many biopsies can be nonspecific and 50% provide too little information for the diagnosis of Wegener's.[1]

Differential diagnosis (alternative possible diagnoses) can be extensive. ANCAs can be positive after the use of certain drugs and other forms of vasculitis can present with very similar symptoms. The saddle-nose deformity may also be seen in relapsing polychondritis, cocaine abuse and in congenital syphilis.

In 1990, the American College of Rheumatology accepted classification criteria for Wegener's. These criteria were not intended for diagnosis, but for inclusion in randomised controlled trials. Two or more positive criteria have a sensitivity of 88.2% and a specificity of 92.0% of describing Wegener's.[6]

According to the Chapel Hill Consensus Conference (CHCC) on the nomenclature of systemic vasculitis (1992), establishing the diagnosis of Wegener's granulomatosis demands:[7]

Several investigators have compared the ACR and Chapel Hill criteria.[8]

Inflammation with granuloma formation against a nonspecific inflammatory background is the classical tissue abnormality in all organs affected by Wegener's granulomatosis.[1]

It is now widely presumed that the anti-neutrophil cytoplasmic antibodies (ANCAs) are responsible for the inflammation in Wegener's.[1] The typical ANCAs in Wegener's are those that react with proteinase 3, an enzyme prevalent in neutrophil granulocytes.[9] This type of ANCA is also known as cANCA, with the c indicating cytoplasmic (in contrast to pANCA, which is perinuclear).

In vitro studies have found that ANCAs can activate neutrophils, increase their adherence to endothelium, and induce their degranulation that can damage endothelial cells. In theory, this phenomenon could cause extensive damage to the vessel wall, particularly of arterioles.[1] However, the presence of ANCA bound to circulating neutrophils has never been found, the activation status of neutrophils from patients with high ANCA titer does not differ from normal individuals and the presence of ANCA is not always associated with development of vasculitis.

The exact cause for the production of ANCAs is unknown, although some drugs have been implicated in secondary forms of Wegener's. As with many autoimmune disorders, the cause is probably genetic predisposition combined with molecular mimicry caused by a virus or bacterium.

Before steroid treatment became available, mortality within one year was over 90%, with average survival being 5 months. Steroids prolonged average survival to 8 months. The introduction of cyclophosphamide (CYC) in the 1970s was a major breakthrough. Five-year survival is now 87%.[10]

Initial treatment is generally with corticosteroids and oral CYC, 1 mg/kg/day and 2 mg/kg/day, respectively. Occasionally CYC is given in monthly intravenous (IV) doses. Monitoring of the white blood count is essential during CYC therapy. Once remission is attained (normally 3 to 6 months), treatment is frequently changed to azathioprine or methotrexate, which are less toxic drugs. Total duration of therapy should be at least one year, or longer in high risk patients. Corticosteroids are tapered to a low maintenance dose, 5–10 mg/day. Plasmapheresis may be beneficial in severe disease or pulmonary hemorrhage. Experience with other treatment agents is very limited.[1]

A systematic review of 84 trials examined the evidence for various treatments in Wegener's granulomatosis. Many trials include data on pooled groups of patients with Wegener's and microscopic polyangiitis. In this review, cases are divided between localized disease, non-organ threatening, generalized organ-threatening disease and severe renal vasculitis and immediately life-threatening disease.[10]

In severe disease not responsive to previously mentioned treatment, the review is positive about mycophenolate mofetil, 15-deoxyspergualin, anti-thymocyte globulin, rituximab and infliximab; data was less favourable for intravenous immunoglobulin (IVIG) and etanercept.[10]

In some patients with severe subglottic stenosis, tracheotomy is required to maintain an airway.

Follow-up: general well-being and laboratory organ markers are checked on a regular basis to ascertain the patient has remained in remission.

On 19 April 2011, the FDA announced its approval of rituximab in combination with glucocorticoids to treat this condition.[12]

The incidence is 10 cases per million per year.[10] 90% of the patients are white. While it mainly occurs in the middle-aged, it has been reported in much younger and older patients.

25 to 40% of patients suffer from flare-ups, but a majority respond well to treatment. Anatomical problems (sinusitis, tracheal stenosis) may require surgery in a small proportion. Relapses can be long and troublesome.

Scottish otolaryngologist Peter McBride (1854–1946) first described the condition in 1897 in a BMJ article entitled "Photographs of a case of rapid destruction of the nose and face".[13] Heinz Karl Ernst Klinger (born 1907) would add information on the anatomical pathology, but the full picture was presented by Friedrich Wegener (1907–1990), a German pathologist, in two reports in 1936 and 1939.[2]

An earlier name for the disease was pathergic granulomatososis.[14] The disease is still sometimes confused with lethal midline granuloma and lymphomatoid granulomatosis, both malignant lymphomas.[15]

In 2006, Dr. Alexander Woywodt (Preston, United Kingdom) and Dr. Eric Matteson (Mayo Clinic, USA) investigated Dr. Wegener's past, and discovered that he was, at least at some point of his career, a follower of the Nazi regime. In addition, their data indicate that Dr. Wegener was wanted by Polish authorities and that his files were forwarded to the United Nations War Crimes Commission. Finally, Dr. Wegener worked in close proximity to the genocide machinery in Lodz. Their data raise serious concerns about Dr. Wegener's professional conduct. They suggest that the eponym be abandoned and propose "ANCA-associated granulomatous vasculitis."[16] The authors have since campaigned for other medical eponyms to be abandoned, too.[17] In 2011, the American College of Rheumatology (ACR), the American Society of Nephrology (ASN) and the European League Against Rheumatism (EULAR) resolved to change the name to granulomatosis with polyangiitis.[3]