Methotrexate
"Amethopterin" redirects here. Not to be confused with aminopterin.

/mɛθɵˈtrɛkseɪt/), abbreviated MTX and formerly known as amethopterin, is an antimetabolite and antifolate drug. It is used in treatment of cancer, autoimmune diseases, ectopic pregnancy, and for the induction of medical abortions.[1] It acts by inhibiting the metabolism of folic acid. Methotrexate began to replace the more toxic antifolate aminopterin starting in the 1950s. The drug was developed by Yellapragada Subbarao.

Methotrexate was originally developed and continues to be used for chemotherapy either alone or in combination with other agents. It is effective for the treatment of a number of cancers including: breast, head and neck, leukemia, lymphoma, lung, osteosarcoma, bladder, and trophoblastic neoplasms.[1]

It is used as a treatment for some autoimmune diseases including: rheumatoid arthritis, psoriasis, psoriatic arthritis, and Crohn's disease, to name a few. Although methotrexate was originally designed as a chemotherapy drug (in high doses), in low-doses methotrexate is a safe and well tolerated drug in the treatment of certain autoimmune diseases. Because of its efficacy and safety, low-dose methotrexate is now first-line therapy for the treatment of rheumatoid arthritis.[2][3] Indeed, multiple studies and reviews showed that patients receiving methotrexate for up to 1 year had less pain, functioned better, had fewer swollen and tender joints, and had less disease activity overall as reported by themselves and their doctors. X-rays also showed that the progress of the disease slowed or stopped in many patients receiving methotrexate.[4]

It has also been used for multiple sclerosis but is not approved by the Food and Drug Administration.[1]

Methotrexate is commonly used (generally in combination with misoprostol) to terminate pregnancies during the early stages (i.e., as an abortifacient). It is also used to treat ectopic pregnancies.[1][5]

It can be taken orally or administered by injection (intramuscular, intravenous, subcutaneous, or intrathecal).[1] Oral doses are taken weekly not daily.[1] Routine monitoring of the complete blood count, liver function tests, and creatine are recommended.[1] Measurements of creatinine are recommended at least every 2 months.[1]

Methotrexate is a highly teratogenic drug and categorized in pregnancy category X by the FDA. Women must not take the drug during pregnancy, if there is a risk of becoming pregnant, or if they are breastfeeding. Men who are trying to get their partner pregnant must also not take the drug. To engage in any of these activities (after discontinuing the drug), women must wait until the end of a full ovulation cycle and men must wait three months.[citation needed]

Central nervous system reactions to methotrexate have been reported, especially when given via the intrathecal route which include myelopathies and leucoencephalopathies. It has a variety of cutaneous side effects, particularly when administered in high doses.[6]

Generally, the more "nonspecific" action a pharmacological substance has, the more possible side effects can be expected. Methotrexate has, like all "cell toxic" substances, a broad array of possible adverse effects. Care should always be taken to read the manufacturer's original instructions for the preparation in question.[citation needed]

Penicillins may decrease the elimination of methotrexate and thus increase the risk of toxicity.[1] While they may be used together increased monitoring is recommended.[1] 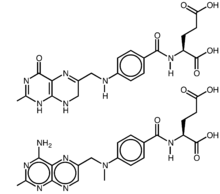 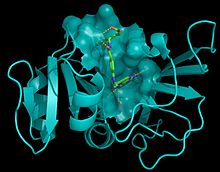 Methotrexate (green) complexed into the active site of DHFR (blue)

Methotrexate acts specifically during DNA and RNA synthesis, and thus it is cytotoxic during the S-phase of the cell cycle. Logically, it therefore has a greater toxic effect on rapidly dividing cells (such as malignant and myeloid cells, and gastrointestinal and oral mucosa), which replicate their DNA more frequently, and thus inhibits the growth and proliferation of these noncancerous cells, as well as causing the side effects listed below. Facing a scarcity of dTMP, rapidly dividing cancerous cells undergo cell death via thymineless death.

For the treatment of rheumatoid arthritis, patients should supplement their diets with folate. In these cases, inhibition of DHFR is not thought to be the main mechanism, but rather the inhibition of enzymes involved in purine metabolism, leading to accumulation of adenosine, or the inhibition of T cell activation and suppression of intercellular adhesion molecule expression by T cells.[8]

Methotrexate is metabolized by intestinal bacteria to the inactive metabolite 4-amino-4-deoxy-N-methylpteroic acid (DAMPA), which accounts for less than 5% loss of the oral dose.

Factors that decrease absorption include food, oral nonabsorbable antibiotics (e.g. vancomycin, neomycin, and bacitracin), and more rapid transit through the gastrointestinal tract (GI) tract, such as diarrhea, while slower transit time in the GI tract from constipation will increase absorption. Methotrexate is also administered in the placenta accreta, inhibiting the blood circulation to the target site.[citation needed]

In 1947, a team of researchers led by Sidney Farber showed aminopterin, a chemical analogue of folic acid developed by Yellapragada Subbarao Lederle, could induce remission in children with acute lymphoblastic leukemia. The development of folic acid analogues had been prompted by the discovery that the administration of folic acid worsened leukemia, and that a diet deficient in folic acid could, conversely, produce improvement; the mechanism of action behind these effects was still unknown at the time.[9] Other analogues of folic acid were in development, and by 1950, methotrexate (then known as amethopterin) was being proposed as a treatment for leukemia.[10] Animal studies published in 1956 showed the therapeutic index of methotrexate was better than that of aminopterin, and clinical use of aminopterin was thus abandoned in favor of methotrexate. In that same year, methotrexate was found to be a curative treatment for choriocarcinoma—a solid tumor, unlike leukemia, which is a cancer of the marrow.[9] The drug was then investigated as a treatment for many other cancers, alone or in combination with other drugs, and was studied for other, noncancer indications in the 1970s. In 1988, it was approved by the U.S. Food and Drug Administration (FDA) to treat rheumatoid arthritis.[11] In 2002, the FDA approved methotrexate to treat Crohn's disease.[12]