/ˌdɒksəˈruːbəsɪn/; trade name Adriamycin; also known as hydroxydaunorubicin) is a drug used in cancer chemotherapy. It is an anthracycline antibiotic, closely related to the natural product daunomycin, and like all anthracyclines, it works by intercalating DNA.

Doxorubicin is commonly used in the treatment of a wide range of cancers, including hematological malignancies, many types of carcinoma, and soft tissue sarcomas.

The drug is administered intravenously, in the form of hydrochloride salt. It may be sold under the brand names Adriamycin PFS, Adriamycin RDF, or Rubex.[2] Doxorubicin is photosensitive, and containers are often covered by an aluminum bag and/or brown wax paper to prevent light from affecting it.

The molecule was originally isolated in the 1950s from bacteria found in soil samples taken from Castel del Monte, an Italian castle.

The history of doxorubicin can be traced back to the 1950s, when an Italian research company, Farmitalia Research Laboratories, began an organized effort to find anticancer compounds from soil-based microbes. A soil sample was isolated from the area surrounding the Castel del Monte, a 13th century castle. A new strain of Streptomyces peucetius, which produced a red pigment, was isolated, and an antibiotic was produced from this bacterium that was found to have good activity against murine tumors. Since a group of French researchers discovered the same compound at about the same time, the two teams named the compound daunorubicin, combining the name Dauni, a pre-Roman tribe that occupied the area of Italy where the compound was isolated, with the French word for ruby, rubis, describing the color.[3] Clinical trials began in the 1960s, and the drug saw success in treating acute leukemia and lymphoma. However, by 1967, it was recognized that daunorubicin could produce fatal cardiac toxicity.[4]

Researchers at Farmitalia soon discovered that changes in biological activity could be made by minor changes in the structure of the compound. A strain of Streptomyces was mutated using N-nitroso-N-methyl urethane, and this new strain produced a different, red-colored antibiotic. They named this new compound Adriamycin, after the Adriatic Sea, and the name was later changed to doxorubicin to conform to the established naming convention.[5] Doxorubicin showed better activity than daunorubicin against murine tumors, and especially solid tumors. It also showed a higher therapeutic index, yet the cardiotoxicity remained.[6]

Doxorubicin and daunorubicin together can be thought of as prototype compounds for the anthracyclines. Subsequent research by many investigators throughout the world has led to many other anthracycline antibiotics, or analogs, and it is now estimated that there are over 2,000 known analogs of doxorubicin. By 1991, 553 of them had been evaluated in the screening program at the National Cancer Institute (NCI).[3]

As of October 31, 2011, Janssen's website stated: "Janssen Products, LP strongly emphasizes that this DOXIL® supply shortage has been caused by capacity constraints at the specialty manufacturer we hired to make this medicine. These capacity constraints are due in part to unplanned downtime created by equipment failures. We are working closely with this supplier to restore uninterrupted access to DOXIL® as quickly as possible."[9] In August 2011, Boehringer's Ben Venue Laboratories unit, which manufactures injectable and inhaled drugs for major companies including Pfizer Inc. (PFE) and Johnson & Johnson, announced that it will exit the contract-manufacturing business in a transition to focus on its generics business [10].

The patent for Doxil expired in October 2009, but Doxil is protected against generic competition until May 2014 because the FDA has granted it "orphan drug exclusivity"; that designation allows an extended period of protection as a way of rewarding companies who research and produce drugs used for rare conditions[11]. Drugs that qualify for orphan drug status are those that affect fewer than 200,000 people in the U.S., or that affect more than 200,000 persons but are not expected to recover the costs of developing and marketing a treatment drug [12].

Recent animal research coupling a murine monoclonal antibody with doxorubicin has created an immunoconjugate that was able to eliminate HIV-1 infection in mice. Current treatment with antiretroviral therapy (ART) still leaves pockets of HIV within the host. The immunoconjugate could potentially provide a complementary treatment to ART to eradicate antigen-expressing T cells.[14]

Doxil is a pegylated (polyethylene glycol coated) liposome-encapsulated form of doxorubicin formerly made by Ben Venue Laboratories in the United States for Janssen Products, LP, a subsidiary of Johnson & Johnson. It was developed to treat Kaposi's sarcoma, an AIDS-related cancer that causes lesions to grow under the skin, in the lining of the mouth, nose and throat, or in other organs. The polyethylene glycol coating results in preferential concentration of Doxil in the skin. However, this also results in a side effect called palmar plantar erythrodysesthesia (PPE), more commonly known as hand-foot syndrome. Following administration of Doxil, small amounts of the drug can leak from capillaries in the palms of the hands and soles of the feet. The result of this leakage is redness, tenderness, and peeling of the skin that can be uncomfortable and even painful. In clinical testing at 50 mg/m2 dosing every 4 weeks, 50.6% of patients treated with Doxil developed hand-foot syndrome. The prevalence of this side effect limits the Doxil dose that can be given as compared with doxorubicin in the same treatment regimen, thereby limiting potential substitution. Substitution would be desirable because liposome-encapsulated doxorubicin is less cardiotoxic than unencapsulated doxorubicin. Doxil is also approved by the FDA for treatment of ovarian cancer and multiple myeloma.[15][16] Outside the United States, Doxil is known as Caelyx and is marketed by Janssen.

Myocet[15] is a non-pegylated liposomal doxorubicin made by Enzon Pharmaceuticals for Cephalon in Europe and for Sopherion Therapeutics in the United States and Canada. Myocet is approved in Europe and Canada for treatment of metastatic breast cancer in combination with cyclophosphamide, but is not yet approved by the FDA for use in the United States. It is currently being studied by Sopherion Therapeutics in a pivotal phase III global registrational trial in concurrent combination with trastuzumab (Herceptin) and paclitaxel (Taxol) for treatment of HER2-positive metastatic breast cancer. Unlike Doxil, the Myocet liposome does not have a polyethylene glycol coating, and therefore does not result in the same prevalence of hand-foot syndrome. The minimization of this side effect may allow for one for one substitution with doxorubicin in the same treatment regimen, thereby improving safety with no loss of efficacy. Like Doxil, the liposomal encapsulation of the doxorubicin limits the cardiotoxicity. In theory, by limiting the cardiotoxicity of doxorubicin through liposomal encapsulation, it can be used safely in concurrent combination with other cardiotoxic chemotherapy drugs, such as trastuzumab. There is an FDA black box warning that Herceptin cannot be used in concurrent combination with doxorubicin, only in sequential combination. Though concurrent combination of trastuzumab and doxorubicin in clinical studies found superior tumor response, the combination resulted in unacceptable cardiotoxicity, including risk of cardiac failure manifesting as congestive heart failure (CHF). Published phase II study results have shown that Myocet, trastuzumab, and paclitaxel can safely be used concurrently without the cardiac risk, as measured by reduction in LVEF function, while still achieving superior tumor response. This finding is the basis for the on-going phase III trial for FDA approval.

Acute adverse effects of doxorubicin can include nausea, vomiting, and heart arrhythmias. It can also cause neutropenia (a decrease in white blood cells), as well as complete alopecia (hair loss). A more mild side effect is discoloration of the urine, which can turn bright red for up to 48 hours after dosing. When the cumulative dose of doxorubicin reaches 550 mg/m², the risks of developing cardiac side effects, including CHF, dilated cardiomyopathy, and death, dramatically increase. Doxorubicin cardiotoxicity is characterized by a dose-dependent decline in mitochondrial oxidative phosphorylation. Reactive oxygen species, generated by the interaction of doxorubicin with iron, can then damage the myocytes (heart cells), causing myofibrillar loss and cytoplasmic vacuolization. Additionally, some patients may develop PPE, characterized by skin eruptions on the palms of the hand or soles of the feet, swelling, pain and erythema.[7]

Due to these side effects and its red color, doxorubicin has earned the nickname "red devil"[17] or "red death."[18]

Chemotherapy can cause reactivation of hepatitis B, and doxorubicin-containing regimens are no exception.[19][20]

Doxorubin and several chemotherapeutic drugs (including cyclophosphamide) cause dyspigmentation. Other groups of drugs that cause this problem include antimalarials, amiodarone, heavy metals (but not iron), tetracyclines, and antipsychotics. [21]

Doxorubicin (DXR) is a 14-hydroxylated version of daunorubicin, the immediate precursor of DXR in its biosynthetic pathway. Daunorubicin is more abundantly found as a natural product because it is produced by a number of different wild type strains of Streptomyces. In contrast, only one known non-wild type species, Streptomyces peucetius subspecies cesius ATCC 27952, was initially found to be capable of producing the more widely used doxorubicin.[22] This strain was created by Arcamone et al. in 1969 by mutating a strain producing daunorubicin, but not DXR, at least in detectable quantities.[5] Subsequently, Hutchinson's group showed that under special environmental conditions, or by the introduction of genetic modifications, other strains of Streptomyces can produce doxorubicin.[23] His group has also cloned many of the genes required for DXR production, although not all of them have been fully characterized. In 1996, Strohl's group discovered, isolated and characterized dox A, the gene encoding the enzyme that converts daunorubicin into DXR.[24] By 1999, they produced recombinant dox A, a cytochrome P450 oxidase, and found that it catalyzes multiple steps in DXR biosynthesis, including steps leading to daunorubicin.[25] This was significant because it became clear that all daunorubicin-producing strains have the necessary genes to produce DXR, the much more therapeutically important of the two. Hutchinson's group went on to develop methods to improve the yield of DXR, from the fermentation process used in its commercial production, not only by introducing dox A encoding plasmids, but also by introducing mutations to deactivate enzymes that shunt DXR precursors to less useful products, for example baumycin-like glycosides.[22] Some triple mutants, that also over-expressed dox A, were able to double the yield of DXR. This is of more than academic interest, because at that time DXR cost about $1.37 million per kg and current production in 1999 was 225 kg per annum.[26] More efficient production techniques have brought the price down to $1.1 million per kg for the nonliposomal formulation. Although DXR can be produced semi-synthetically from daunorubicin, the process involves electrophilic bromination and multiple steps, and the yield is poor.[27] Since daunorubicin is produced by fermentation, it would be ideal if the bacteria could complete DXR synthesis more effectively. 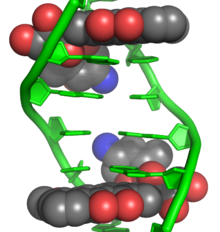 Doxorubicin interacts with DNA by intercalation and inhibition of macromolecular biosynthesis.[29][30] This inhibits the progression of the enzyme topoisomerase II, which relaxes supercoils in DNA for transcription. Doxorubicin stabilizes the topoisomerase II complex after it has broken the DNA chain for replication, preventing the DNA double helix from being resealed and thereby stopping the process of replication.

The planar aromatic chromophore portion of the molecule intercalates between two base pairs of the DNA, while the six-membered daunosamine sugar sits in the minor groove and interacts with flanking base pairs immediately adjacent to the intercalation site, as evidenced by several crystal structures.[28][31]

There is some evidence for antimalarial activity for doxorubicin and similar compounds. In 2009, a compound similar in structure to doxorubicin was found to inhibit plasmepsin II, an enzyme unique to the malarial parasite Plasmodium falciparum.[32] The pharmaceutical company GlaxoSmithKline (GSK) later identified doxorubicin in a set of compounds that inhibit parasite growth [33]